(Minghui.org) Although the coronavirus pandemic still continues, in London, restaurants are reopening and people are coming out to enjoy the fine summer weather. Falun Dafa practitioners were able to resume activities that introduce the spiritual discipline to the public and raise awareness of the persecution of their faith in China.

On August 16, several passersby stopped at the practitioners' booth to ask what Falun Dafa is or to watch the exercise demonstration. Many people signed petitions to support practitioners and oppose the Chinese Communist Party's (CCP) persecution of their faith. 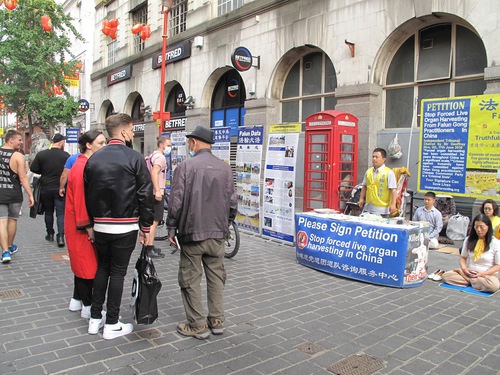 Practitioners resumed holding activities in London on August 16, 2020, to introduce the spiritual practice to the public.

Passersby: By Supporting You, We Support Ourselves

Sylvia came from Italy two years ago and was happy to see Falun Dafa practitioners in Chinatown. Along with her friends Fabio and Viola, they learned about the persecution of Falun Dafa in China and signed petitions calling to end the brutality.

Sylvia meditates and was curious to learn more about Falun Dafa. Following along with a practitioner, she tried the exercises and said the results were overwhelming. “I really feel better,” she said. She was glad to hear that Falun Dafa books were available for free online and said she would continue doing the exercises when she returned home.

All three friends were shocked by the harsh treatment practitioners received in China for their belief in Truthfulness-Compassion-Forbearance. “It’s hard to imagine tragedies like this could happen in our society today,” Fabio remarked. “We must stop it because this world needs justice.”

They said the CCP’s totalitarian regime has not only harmed Chinese people but also threatened the world, as shown by its disinformation during the coronavirus outbreak. “What you are doing here is important and very meaningful. More people need to know this,” Sylvia explained. “By signing these petitions, we not only support you–we support ourselves.” 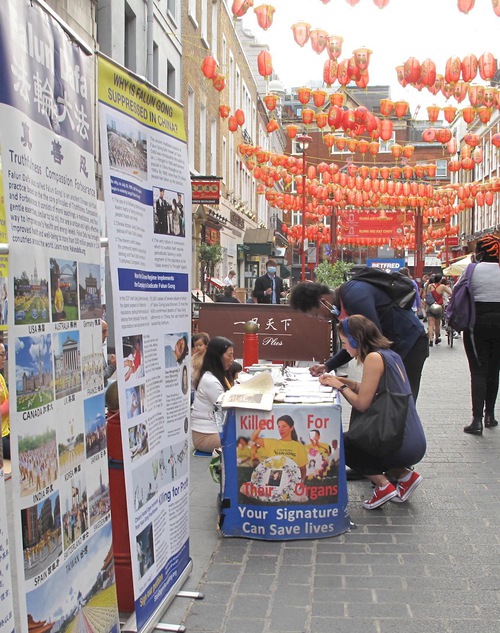 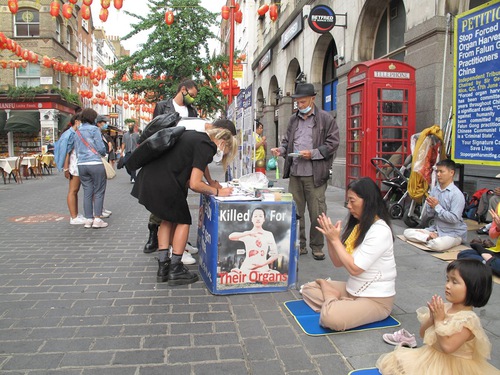 Passersby learn about the persecution in China and sign petitions to end it.

Eileen Von Skopnik, an actress and producer, speaks a little Chinese and said she likes Chinese culture. Having heard about the persecution previously, she signed the petition and said she hopes the persecution will end soon. “This persecution is wrong, and it should not have happened in the first place. The forced organ harvesting is a nightmare, and what the practitioners have suffered is beyond imagination. I want to cry whenever I think about it.”

Her friend Robert said meditation improves both mind and body and develops one’s inner wisdom. “By remaining calm and peaceful in one’s mind, a person will have great spiritual power,” he added.

Eileen and Robert said U.K. officials need to be clear on the CCP’s threat and curb the damage the regime has brought to the world. They thanked practitioners for their efforts and said they feel the entire world will benefit from them.

Besides signing the petition herself, Eileen said she would also tell others about it. Several months of staying at home during the pandemic gave her an opportunity to rethink her life and the environment around her, she said. She learned the importance of finding inner peace and noticed many people have gained new understandings of the world because of the pandemic.