Taiwan: Raising Awareness of the Persecution in China

(Minghui.org) On August 9, 2020, approximately 1,000 Falun Gong practitioners participated in the Taiwan Experience Sharing Conference. The main theme of the event was finding more effective ways to clarify the truth to the people in China.

In an effort to encourage more practitioners to help raise awareness in China, some practitioners provided detailed technical assistance. They also reminded each other that better results will be achieved when they approach everything with a pure and compassionate heart. 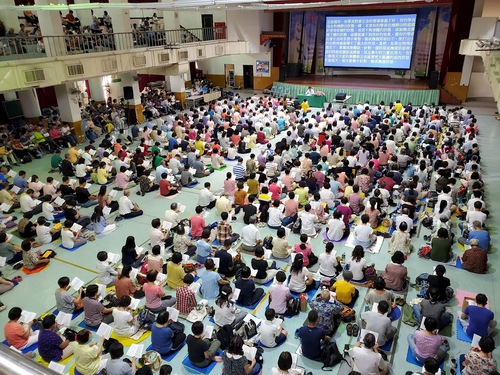 Experience Sharing Conference on Clarifying the Truth to Mainland China

Treasuring the Opportunity to Save Sentient Beings

“Using cell phones to clarify the truth has a lot of benefits,” said Gan Hui-min, a practitioner from Hualien City, Taiwan. “Not only are you unrestricted by time and place, it also doesn't cost any additional money to call China. You really can reach a lot of people within a short amount of time!”

She continued, “Many people renounce their membership in the Chinese Communist Party (CCP) and its affiliated organizations, after learning about the Party’s evil nature. Some even ask questions about how to practice Falun Gong. A cell phone is indeed a great tool for truth-clarification work!”

She said that she was deeply touched when people either agreed to renounce their membership in the Party, told her that “Falun Gong is good,” or expressed a desire to learn more about Falun Gong.

Whenever she faces issues, she tries her best to solve them on her own. With a pure mind and a determined heart, she clarifies the truth whenever she has time.

“Dafa practitioners should feel blessed to have the great fortune to clarify the truth and save sentient beings at this critical point in history!” Gan added.

One practitioner shared how he didn't know how to use a cell phone or a computer. In addition, he only spoke Taiwanese and just a little bit of Mandarin. Encouraged by his fellow practitioners, he practiced reading aloud the phone scripts in Mandarin, again and again, while facing a wall. He paid close attention to the tone and pitch of his voice, until he was very proficient and confident.

Another practitioner shared how he was able to advise a police officer to withdraw from the Party—with his real name—after attending just one telephone training session. He felt encouraged by this experience and continued making calls to mainland China.

Another practitioner said, “When I first started making calls to China, I quickly ran out of things to say. Now I can chat for more than 20 minutes!”

If a person failed to quit the Party, he used to think, “This person has been deeply misled by the CCP’s propaganda.” Now he looks within to see if his tone of voice or lack of kindness may have played a role in the person not quitting the CCP—or perhaps he didn't fully answer their questions or address their concerns.

One practitioner shared how he used to feel uneasy when a person cursed and verbally abused him. However, after listening to a few training recordings, he came to better understand things from the other person's perspective.

Helping Others to Fulfill Their Mission of Saving Sentient Beings

“When the coronavirus pandemic first started, I decided to help other practitioners fulfill their mission of saving sentient beings,” said Tang Mei-lin of Taoyuan City. “It's not enough for me to make a lot of calls to China, I should help others become more proficient at it, too!”

When she saw that many practitioners were afraid while calling China, she kindly coached them on live calls, which helped them overcome their fear.

She shared how she went about recruiting practitioners for the Taiwan phone group and how she turned a group Fa study site into a calling base. Some elderly practitioners learned to make phone calls at the base and can now make calls from home.

In assisting others, her own heart nature improved. “I used to be in a hurry whenever I made calls to China,” she said. “I talked fast and my voice was very loud. Now, I can speak slowly, with a level tone of voice.”

She noticed that having a calm mindset makes it easier to cooperate with other practitioners on calls.

One day, Tang visited a bed-ridden practitioner in her 80s, in order to encourage her. Now, this practitioner can walk around after studying the Fa and has greatly improved her heart nature.

Tang went to her home four or five times to install a phone-calling program and to teach her how to use it. The elderly practitioner later joined the phone calling group. She is now able to advise three or four people, per day, to quit the Party.

Shocking the Perpetrators via Phone Calls

Chou Chin-lian of New Taipei City shared his experience of rescuing practitioners in China. He said phone calls were the most efficient and easiest way to persuade those involved in the persecution. “One phone call can shock the evil!” he exclaimed.

He then provided the following example. “One day, the director of a police substation drove a practitioner—who had just finished his full prison term—to a brainwashing session.

“I called him and said, 'Please release the practitioner you just picked up from prison.' The director said, 'It is none of your business!' then hung up.”

Chou called several practitioners and asked them to also make phone calls to the director. Although most calls did not go through or were hung up on, the practitioner was released later that day.

Chou also tried calling Ma Pingan, the head of a state security brigade, but was never able to get through. Several days later, someone hurriedly answered the phone saying, “My name is not Ma Pingan,” and then hung up.

“Letting the phone repeatedly ring can help dissuade the perpetrators from committing wrongdoings and assist in rescuing practitioners,” said Chou. “I think the key is having a mind filled with righteous thoughts and taking quick action.”

He said that some practitioners thought that a positive outcome could only be achieved if the person in China actually picked up the phone and listened. Chou said, “Actually, the overall effect will be better if more practitioners make more phone calls with righteous thoughts,” Chou explained.

Some calls never go through or are hung up right away, because the person in China knows the purpose of the call, and that the calls originated from overseas. This in itself shows that the calls are playing a positive role in restraining the perpetrators.