(Minghui.org) Falun Gong practitioners and supporters held a rally and a car tour in Toronto, Canada, on August 8, 2020, to support the hundreds of millions of Chinese who have withdrawn from the Chinese Communist Party (CCP) and its affiliated organizations.

The rally was held at 11 a.m. on Pacific Place in Markham. The speakers at the rally included Federation for a Democratic China Vice Chairman Reimonna Sheng; Canada Hong Kong Alliance Director Winnie Feng; Chairman of the Canada-Hong Kong Link; former Phoenix TV reporter Zhang Zhenyu, who now lives in Canada; and Zhao Zhongyuan, a famous physician of Chinese medicine from Beijing who fled China last year. They exposed the CCP’s crimes and encouraged more people to quit the Party.

A car tour was held after the rally and lasted an hour and a half. Thirty-three vehicles decorated with banners started at Pacific Place and toured along the main streets of Scarborough, Markham, and York. The cars could be seen along Finch Avenue and Steels Avenue and Highway 7.

Drivers showed their support for the activities by giving a thumbs up to practitioners and honking their horns in encouragement. People in their cars read the banners and exhibition boards with great interest as they passed by. Practitioners also held banners and posters at intersections along the car tour route. 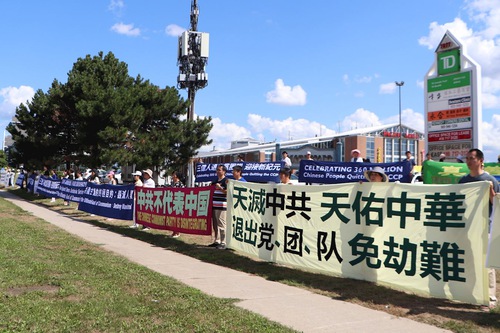 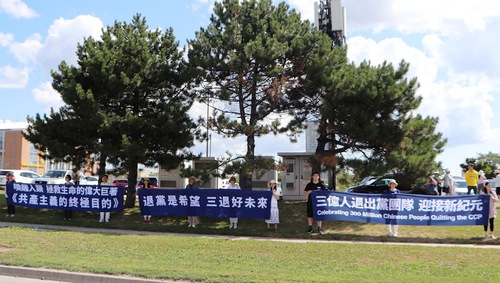 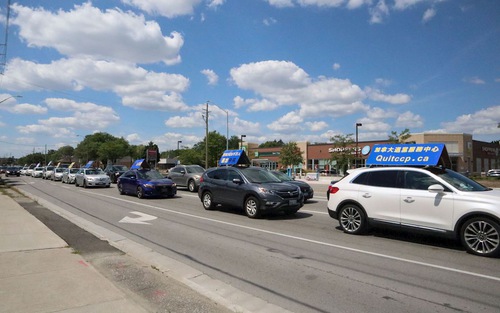 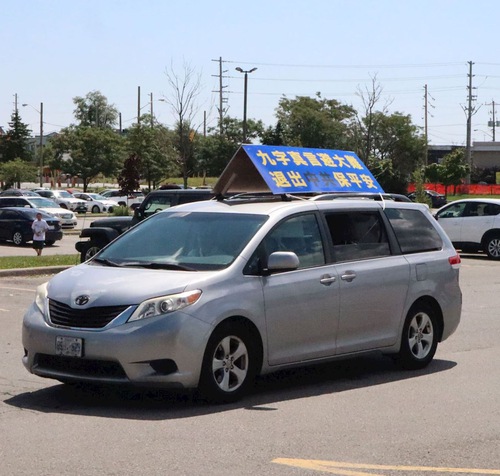 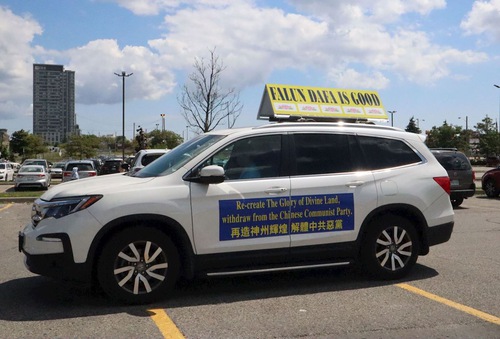 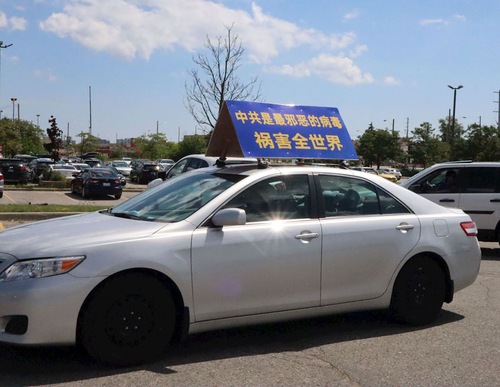 Car tour with banners on top of vehicles in Toronto 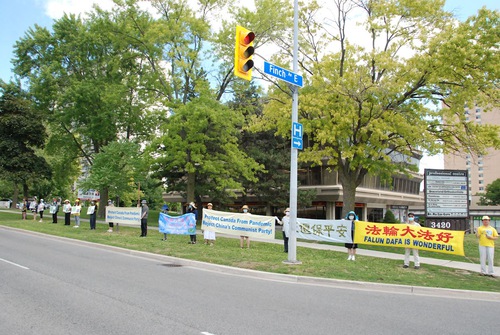 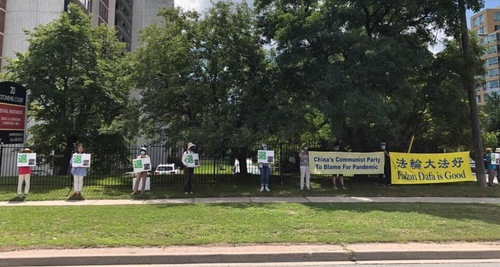 Practitioners hold banners and posters at intersections along the car tour route. 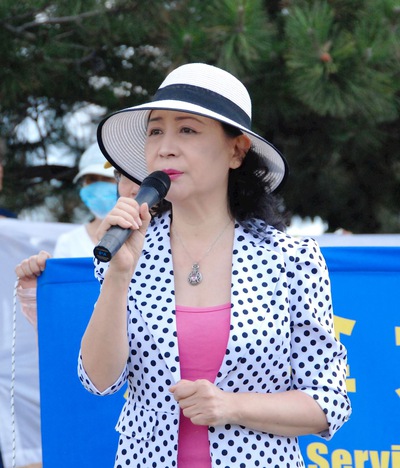 Reimonna Sheng, Vice Chairman of Federation for a Democratic China and writer, spoke at the rally.

Ms. Sheng spoke about the mentalities of people who join the CCP and then said, “Many people should be touched and have repentance in their hearts at this time. When the world finally unites to end the CCP’s tyranny, we will look back.

“On this journey of the arduous struggles that lead to today’s development, Falun Gong practitioners have really contributed the greatest and sacrificed the most. When all Chinese people begin to have the right to quit the CCP, and when the whole world finally realizes that the CCP’s tyranny must end, all Falun Gong practitioners, every one of you present, is worthy of respect, because you have spent a lot of your time, energy, hard work, and health. Many practitioners in mainland China have paid the price of their lives for such a turning point today. So Chinese people should thank you.

“All people in the world who love freedom, peace, and human rights and hope that China can achieve democracy should thank you. Here, I say, 'Thank you.'”

The CCP Will Collapse Soon 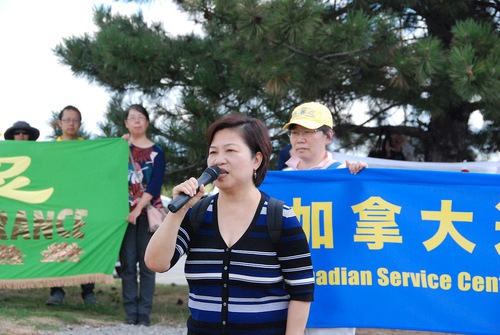 Winne Feng, director and co-founder of the Canada Hong Kong Alliance, commended Falun Gong practitioners for their courage to raise awareness of the CCP’s nature while facing persecution. She called for working together to witness the day of the CCP’s demise.

Ms. Feng said, “360 million Chinese people have quit their memberships in the CCP and its affiliated organizations. This is outstanding. We continue to protest the CCP’s tyranny and safeguard freedom of religion, freedom of speech, democracy and human rights in Canada, China, Hong Kong and elsewhere. We wish to see the day of the CCP's demise!”

Choosing Conscience and Quitting the CCP 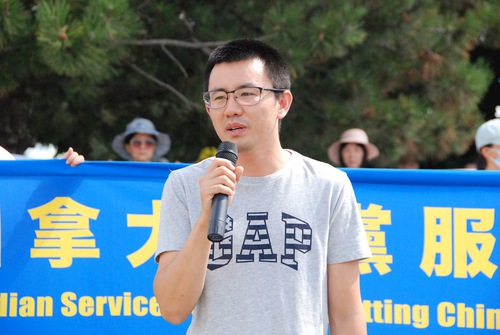 “I read news about quitting the CCP and its affiliated organizations in 2012 after getting around the CCP’s information censorship,” Mr. Zhang said in his speech. “I made a statement to renounce the CCP on the Epoch Times website. I was happy with my choice. I can state again here today that I quit the CCP forever.”

“I learned about Falun Gong through their media after getting around the internet firewall and came to understand the evil nature of the CCP even more. As a human being, when facing the two paths of evilness and kindness, one should choose kindness. I wish more people would not get involved with the evil for personal gain.”

“Falun Gong practitioners have persevered the longest and paid the most to expose the CCP’s nature. Many practitioners died for this,” Mr. Zhang said. He condemned the CCP’s persecution of Falun Gong, especially its horrific crimes of live organ harvesting.

“The evilness of the CCP is unprecedented. Nowadays, under the global effort to end the CCP's tyranny, Falun Gong practitioners stand at the forefront. Their positions are important and cannot be replaced in the awaking of Chinese people.”

“For personal safety and the future of China, we should stay away from the CCP,” he said. 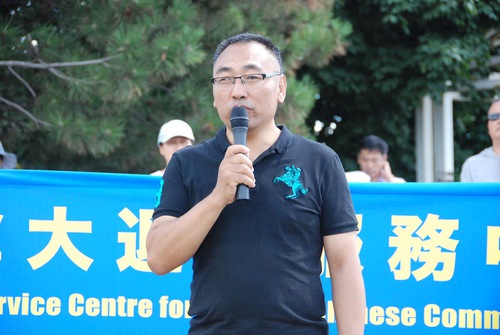 “But they are people with a conscience, who resist the threats and violence with the law. If people can clearly recognize the evilness of the CCP, if people still have a sense of justice and conscience, everyone should stay away from the Party.” 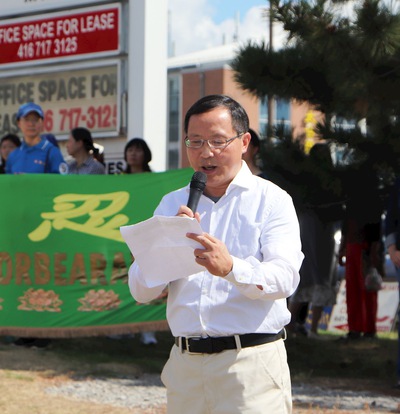 Jiang Fan, coordinator of the Canada Center for Quitting the CCP

Jiang Fan, the coordinator of the Canada Center for Quitting the CCP, read an open statement at the rally. The statement said communism has harmed the world for more than a century and brought countless hardships to the Chinese people. The current situation demonstrates a big change in China – the CCP is facing its final destiny and will collapse soon.

“The Canada Center for Quitting the CCP safeguards justice and calls on Chinese people to learn about the nature of the Party and reflect on the pain and disasters caused by the Party. At the critical moment of this historical turning point, one should be a promoter of history instead of just a witness. Quit the CCP and welcome a new era without the CCP,” he said.

“My Family Benefits When I am Diligent in Cultivation Practice”