(Minghui.org) Today's news from China includes incidents of persecution that took place in 20 cities or counties in 13 provinces, where at least 45 practitioners were recently persecuted for their belief. 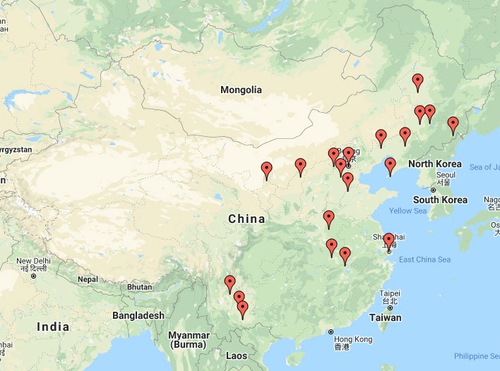 Ms. Nie Bihua, in her 60s, was arrested by Domestic Security officers around September 2019. Ms. Yan Yuqiong, in her 40s, was arrested in March 2020. Both practitioners are being held in the Kunming City Women’s Detention Center.

Several plainclothes officers broke into Mr. Piao Jinzi and his wife Ms. Jin Fenglu’s home and ransacked the place on the morning of July 18, 2020. They confiscated Falun Dafa books, printed materials, and two cell phones. Three other practitioners were at the couple’s home at the time. They were all arrested, and held in the Yanji City Detention Center. Ms. Jin was released due to her age.

During the detention, the guards coerced and enticed Mr. Guo to give up practicing Falun Gong. The guards also forced him to find Mr. Guo Yuanrong, who has been displaced. Mr. Guo was forced to pay 50 yuan for living expenses. The guards took information from his cell phone. Mr. Guo returned home on the morning of June 30.

Four months earlier, officers led by Zhang and Wang broke into Mr. Guo’s home on April 29, 2020. Mr. Guo was not at home at the time, so the officers told his wife that he had to go to the police station. They threatened that if he did not go, they would return.

Officers from the Linying County Police Department harassed and arrested practitioners in Beichang Village on July 19, 2020. If any items related to Falun Dafa are found at a practitioner’s home, the practitioner is arrested.

The officers found Falun Dafa books, printed materials, and paper bills with Falun Gong facts written on them at Ms. Cheng Fengqin’s home. She escaped, so the officers took her daughter as a hostage, and pressured her son-in-law to file a case to help the police locate Ms. Cheng.

Elderly Ms. Huang Zhibin and another practitioner, Luo Yungui, from Chaisang District, were arrested while shopping in a supermarket on the morning of July 11, 2020. Both practitioners were taken to the Shahe Street Police Station.

Luo’s home was ransacked, and all Falun Dafa books and related items were confiscated. Ms. Huang’s home was pried open and ransacked.

A member of Luo’s family went to the police station to demand Luo’s release. Luo returned home at 11:00 a.m. that day. Ms. Huang was released at 11:00 p.m. that night.

Meng Diaofang, an officer from the Yingbilu Police Station, called Ms. Li Huili on July 21, 2020, and demanded to know if she still practiced Falun Gong

Ms. Zhu Yunxiang was recently phoned twice by an officer from the Daqiao Sub-district.

Ms. Wei Yuchi, 41, and Mr. Jin, in his 80s, from Huanggu District, were arrested by over 20 officers on the evening of July 15, 2020. Ms. Wei’s home was ransacked while no one was at home. Her Falun Dafa books, photos of the founder of Falun Gong, and a cell phone were confiscated.

Ms. Wang Chunmei was arrested and detained by the Kaiyuan City police on May 27, 2020, for talking to people about Falun Gong and the pandemic, distributing Falun Gong materials, and handing out keepsakes. She was officially arrested on June 10, and has been held in the Honghe Prefecture Detention Center. No family or relatives have been allowed to visit her, and only limited communication was allowed through her lawyer.

Prior to her most recent arrest, Ms. Wang had been arrested, detained, and lived under surveillance eight times since 1999. Her home was ransacked numerous times, and a large number of personal belongings and items related to Falun Gong were confiscated.

Ms. Song Liqin will be tried by the High-tech Development Zone Court on July 28, 2020.

Ms. Chen, 76, was arrested by four or five plainclothes officers on the morning of July 21, 2020, for talking to people about Falun Gong.

Mr. Ma Zhiwu was arrested by Yang Fuchun and other officers from the Yuanzhou District Police Department, Guyuan City, when he visited his hometown in Guyuan City in early June 2020. He was held in the Guyuan City Detention Center.

He was officially arrested by the Yuanzhou District Procuratorate on June 25. He immediately went on a hunger strike, and was taken to a hospital.

Ms. Zhang Junqin and Ms. Zhang Lifang are also being held in the detention center.

Ms. Wang Xiuying was arrested and her home was ransacked by officers from the Dong District Police Department on July 11, 2020. She is being held in the Yanbian Detention Center.

Ms. Xie Hongzhu was arrested by the Baoshan District police on July 21, 2020. Her current whereabouts are unknown.

Officers from the Yuguantun Police Station went to 80-year-old Ms. Song Baolian’s home and confiscated an incense burner and two Falun Dafa books in May 2020.

Personnel from the Tianqu West Road Sub-district Administration Office phoned Ms. Peng Fengyun’s husband, and asked if Ms. Peng had phoned him, and if she still practiced Falun Gong.

Mr. Lu Qingrong, a retired teacher from Wucheng County, received a call on May 8, 2020. He was told to go to the school, and sign a statement renouncing Falun Gong.

Mr. Zhang Qingtao and his non-practitioner brother-in-law Mr. Xu Qiang from Pulandian District were arrested on July 11, 2020. They are being held in the Pulandian District Detention Center. Their family members went to the Fengrong Police Station and demanded to see them. The police refused.

More than twelve officers from the Majiapu Police station, the Fengtai Police Department, the Domestic Security Division, and the Political and Legal Affairs Committee recently broke into the couple’s home and ransacked the place.

Elderly Mr. Zhao, along with seven or eight other practitioners, were arrested when they were reading the Falun Gong teachings together at Mr. Zhao’s rented home on July 14, 2020. The police ransacked the place and confiscated at least two computers, about seven printers, printed materials, printer paper, supplies, and other items.

Officers from the Xiaji Police Station, in Panlongcheng Economic Development Zone, Huangpi District, broke into Ms. Zhang Linmei’s home on July 15, 2020, and confiscated a computer and other belongings.

Plainclothes officers broke off the door lock and broke into Ms. Yu Jiaoru’s fifth floor apartment and ransacked the place at 7:00 p.m. on July 15, 2020. Ms. Yu and her parents were arrested.

Ms. Zhao Xiulan lives alone in an apartment on the fourth floor. Her storeroom downstairs was ransacked, and all the items were taken away.

Mr. Li Zongze, Mr. Li Lixin, and two other practitioners were arrested at home by officers from the Yongding Town Police Station and the Domestic Security Division in Mentougou District on the morning of July 19, 2020.

Yuan Fengshan, 75, was arrested by officers from the Beipiao Police Department on July 21, 2020.

Officers from the Li County Police Department went to Mr. Li Jiansuo’s home in Duikanzhuang Village to arrest him on July 16, 2020. Mr. Li was not at home, so they took his wife Ms. Zhao Yumei to the police department. They took blood samples, fingerprints, and photos of her. They forced her to write the three statements renouncing Falun Gong.

Under the guarantee of the village Party secretary and others, Ms. Zhao was released at around 8:00 p.m. that night. Ms. Zhao’s cell phone was confiscated. Mr. Li was subpoenaed on July 20, and was told to go to the police department.