Germany: Politicians Send Letters to Support Practitioners' Events in Three Cities to Call for an End to the Chinese Regime's Persecution

(Minghui.org) Falun Gong practitioners in Germany received letters and emails from 50 politicians by July 20, 2020, to commemorate the 21 years of peacefully protesting the CCP's (Chinese Communist Party) persecution. They expressed their concern about the persecution and condemned the CCP’s atrocities. Practitioners read their messages during activities that they held in three cities.

Michael Brand, Chairman of the Committee on Human Rights and Humanitarian Aid of the German Parliament, encouraged Falun Gong practitioners to keep doing what they are doing because “Freedom will eventually win.”

He wrote, “CDU/CSU stands with the oppressed and will always speak for the people who are suppressed, defamed and enslaved. We thank you for fighting for human rights with your power and courage. You have been doing it for 21 years. Falun Gong practitioners' activities should be supported and respected.”

“It is clear that your basic human rights will not be deprived for long. The CCP knows that brutal suppression doesn’t show how powerful it is. Instead it shows its cowardice. One thing is clear that freedom will eventually win. We will keep fighting for freedom and human rights together.”

Margarete Bause, Parliamentarian and human rights spokesperson for the Green Party, wrote, “Religious freedom is part of the Chinese constitution. In reality it is only limited to the five religions that are controlled by the CCP. All other religious believers who are not under its control are persecuted, arrested and detained arbitrarily. Falun Gong practitioners, like other religious groups, are suppressed on a large scale. Their human rights are severely trampled. We strongly condemn it.”

Juergen Braun, Parliamentarian, (AfD), Deputy Chairman of the Committee on Human Rights and Humanitarian Aid, said, “CCP’s persecution of peaceful and non-political Falun Gong practitioners shows that the CCP is totalitarian, brutal and paranoid. It spares no efforts to execute its ideology. It does the same to Hong Kong's people. The CCP’s new National Security Law deprives Hong Kong's people of citizen rights. Any violator will be sentenced to 10 years in prison. We condemn the CCP’s behavior. We demand that the CCP comply with the human rights agreements it has signed.”

Ulle Schauws, Parliamentarian, member of the Green Party, wrote, “It is very important that we point out the human rights abuses and pay attention to them so that we can completely stop the persecution.”

Berliner: This Crime Cannot Be Tolerated

Practitioners in Berlin gathered at the Janowitz Bridge opposite the Chinese Consulate at 9:30 a.m. on July 20. They sat in two rows to protest the persecution. 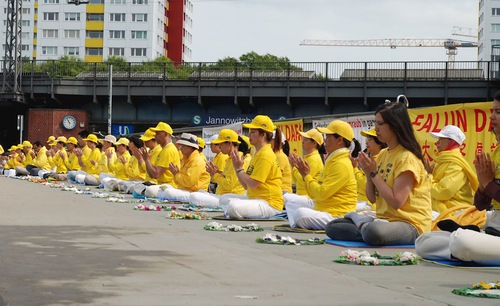 Practitioners meditated at the Janowitz Bridge to call attention to the persecution. 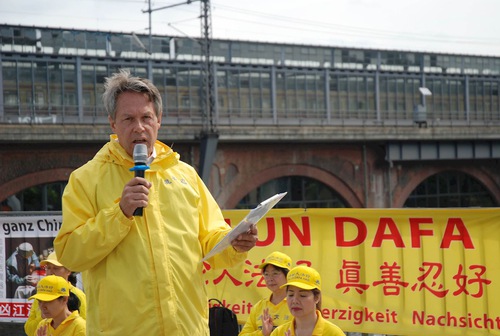 Practitioners read some of the messages of encouragement sent by German politicians. 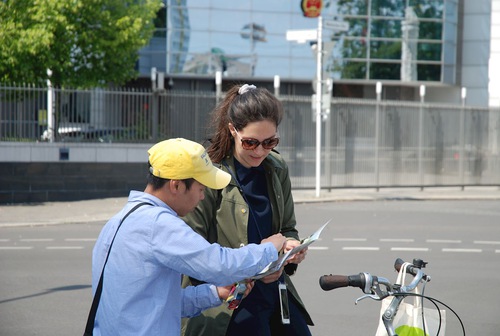 Practitioners clarify the truth to people

Mathias is a local Berliner. He knows a lot about the CCP's persecution against its own people from the news because he is a translator. He said, “I have heard a lot about these human rights abuses in China, especially the persecution of Falun Gong practitioners and Tibetans. I hope that my signature will help improve the situation. No group should be persecuted. It cannot be tolerated that a person is detained and then his organs are forcibly harvested.”

He said, “It's no use asking the CCP in a friendly way to stop doing such things. We have seen that it hasn’t achieved any results. I think that it is better that Western free and democratic societies come together to send a strong voice to China and give them pressure, no more being friendly. We should do it directly. If we stop relying on China it will also boost the local economy.

“The CCP's behavior violates all of the World Human Rights Conventions. I believe that Chinese people hope that they can live as freely as people of the other nations.” 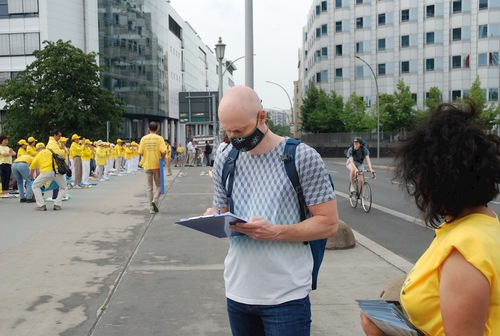 Elga, who is in her sixties, stopped cycling when she saw the practitioners’ gathering. After listening to their speeches her eyes were full of tears.

“My brother practices Falun Gong,” she said, “So I know about Falun Gong and the persecution in China. The killers are not punished. This cannot be accepted. It must be stopped. It is heart-wrenching. It is beyond what we can accept. What they did to the female practitioners in the forced labor camp was utterly shameful.

“What the CCP does is unacceptable. The only way is to expose the brutalities. When people know the details and think about what's happening, real changes will come.”

For years Falun Gong practitioners have gathered in front of the Chinese Consulate in Frankfurt twice a week to protest the CCP’s persecution, clarify the truth to people and appeal to German society. 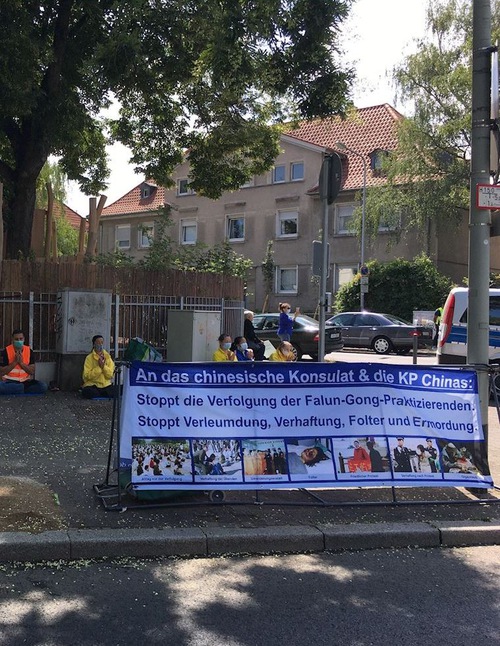 Falun Gong practitioners held a peaceful protest in front of the Chinese Consulate on July 17, 2020.

Two young men who recently left China came to look at the display boards and talk to a practitioner. They asked why practitioners are persecuted in China. The practitioner said, “Falun Gong is taught for free and helps people improve their health and character. Nearly 100 million people practiced Falun Gong within 7 years of its introduction to the public. Falun Gong teaches Truthfulness-Compassion-Forbearance while the CCP spreads lies and practices brutality. Falun Gong exposes the CCP’s evil nature. So the CCP mobilized the state machinery to suppress Falun Gong.”

After they learned the truth, they agreed to withdraw from the CCP’s youth organizations.

Long Time Perseverance in Front of Chinese Consulate in Munich 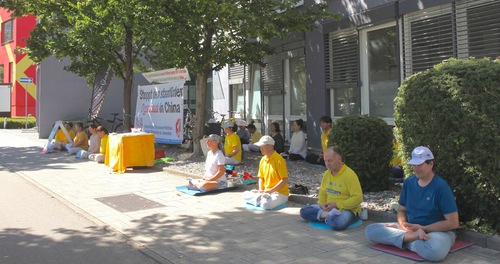 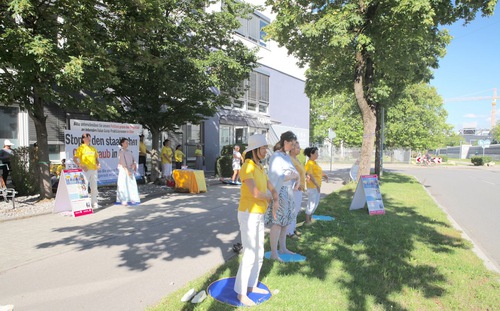 Falun Gong practitioners protest against the persecution in front of the Chinese Consulate in Munich, Germany.

Falun Gong practitioners held activities in front of the Chinese Consulate in Munich on July 20, 2020, to call for an end to the persecution. People in vehicles and passers-by could clearly read the banners with the words, “Falun Dafa is good”, “Truthfulness-Compassion-Forbearance is good”, “Stop the Persecution of Falun Gong” and “Stop Harvesting Organs from Falun Gong Practitioners.”

A young man came to talk to a practitioner and signed the petition to end the organ harvesting. He said that it was a pity that some German politicians were more interested in selling cars to China than raising awareness of the CCP's human rights abuses. 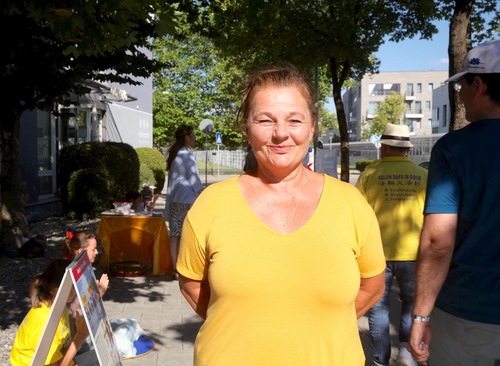 Ehemann traveled a long distance to participate in the event.

Some practitioners traveled several hours to participate. Ehemann was one of them. She said, “Ordinary people and media must speak out. She feels every activity practitioners hold is significant. “As long as we keep raising awareness, changes will come.” 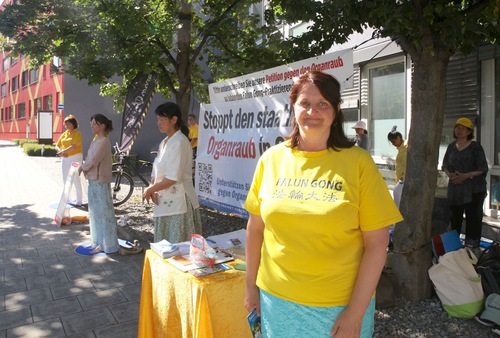 Dascalu has come to the Chinese Consulate to protest against the persecution every week for the past two years.

Dascalu is in charge of organizing activities. “I feel very sad. The persecution has lasted for such a long time. It's so evil!”

Due to the coronavirus pandemic and the CCP's cover-up, people and politicians in Germany are increasingly aware of the Party’s wanton disregard for human life. They can now better relate to Falun Gong practitioners' experiences.