(Minghui.org) To date, there are 250,000 confirmed cases of coronavirus and approximately 30,000 deaths in Spain. The damage caused by the Chinese Communist Party’s (CCP) coverup is still being felt in Spain.

In China, the CCP continues to persecute Falun Gong practitioners every day. They called on the CCP to end the 21-year-long persecution immediately, stop repressing Chinese citizens, and stop lying to the whole world. 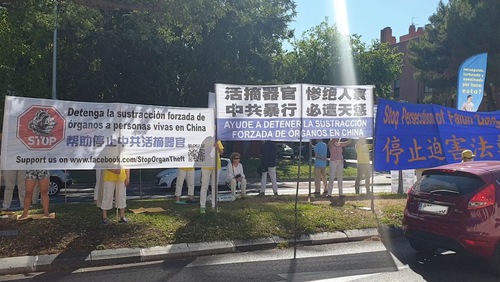 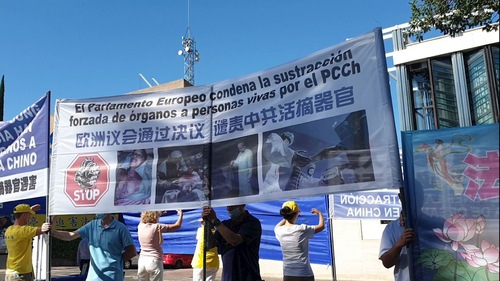 Falun Dafa practitioners hold a peaceful protest outside the Chinese Embassy in Madrid.

Seeing the True Colors of the CCP 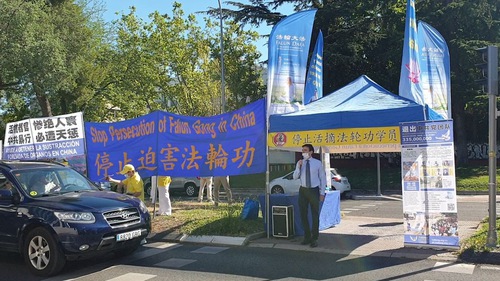 Carlos, a human rights lawyer in Spain, said in his speech at the rally that the coronavirus epidemic let the whole world see the true colors of the CCP. The global anti-CCP movement cannot be stopped, and the regime is on the verge of collapse. He urged the Chinese embassy employees to denounce the CCP for the sake of their future.

Cars on both sides of the road honked their horns in an expression of support. Many drivers lowered their windows and said China libre – free China, after seeing the display boards put up by practitioners. Passersby took information distributed by practitioners and signed the petition calling for an end to the persecution. Several even applauded the practitioners.

Signing the Petition Without Hesitation 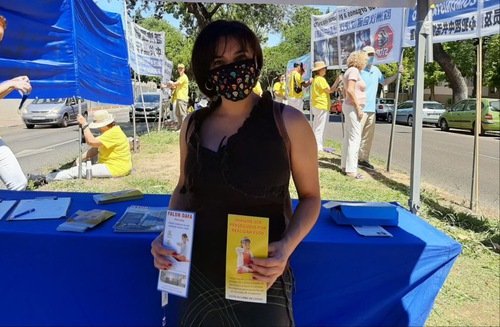 Mónica Ramon signed the petition without hesitation after practitioners told her about the torture faced by practitioners in China for refusing to give up their belief. She said that she agrees with the activities held by practitioners to raise awareness about human rights violations, and hopes the whole world can pay attention to the matter. Mónica is a yoga enthusiast and is very interested in China’s traditional qigong. She told practitioners that she plans to learn more about Falun Dafa upon returning home. She hopes to go to the park to learn the exercises from practitioners two weeks later.