(Minghui.org) (Continued from Part 1) Mr. Zhang Zhenyu bought dozens of copies of the book Zhuan Falun and took them to bookstores throughout Hualien County. He told the bookstore owners, “Please put the books in a noticeable area of your store. You can keep the money, but please order some more when you run out.” Many people learned about Falun Dafa through these bookstores, and some bookstore owners who read the book started to practice Falun Dafa themselves.

Zhenyu received a call from a woman who said she would like to learn Falun Dafa. Zhenyu invited the woman to the group exercise site, but she said it wasn’t convenient for her. Zhenyu then said that he and his wife would go to her home to teach her.

It was the day before a hurricane was forecast to hit. Despite the heavy rain, Zhenyu and his wife drove to the woman’s home. They waited at the door because she was finishing up a piano lesson with a child. Zhenyu thought it was odd that the woman didn’t let them in even though it was raining. After the child left, the woman waved at Zhenyu and his wife to let them in. Zhenyu was even more surprised that the woman didn’t stand up to show them any courtesy.

Zhenyu recalled, “After we sat down, the woman climbed out of her chair with her hands and sat on the floor. I suddenly realized she was disabled and felt embarrassed for having negative thoughts about her. I almost cried. I felt ashamed that I hadn’t viewed things as compassionately as a cultivator should.”

After teaching her the exercises, Zhenyu and his wife mentioned that she would make quick progress if she could study the Fa and exchange understandings with the study group. The woman said that no one could take her there. It turned out that her husband was also disabled.

Zhenyu contacted some other practitioners and decided that they would give her rides to and from the group exercise site, though they had to get up at 3:30 a.m. to pick her up, put her wheelchair in the car, and then rush to work after sending her home.

“We had a wish to spread Falun Dafa all over Hualien, so we approached Mr. Xie, the associate general manager of Hualien Cable TV,” Zhenyu said.

When Mr. Xie asked Zhenyu about his organization and the availability of funds, Zhenyu replied that they had no organization or money but he would try to come up with the money after getting an estimate.

Mr. Xie looked at Zhenyu for a while and then left the room with a cigarette without saying anything. He came back about 15 minutes later and told Zhenyu, “Do you realize it costs a lot to broadcast a program?” “I know, tell me how much, I’ll pay for it,” Zhenyu replied.

“Will you pay out of your own pocket?” Mr. Xie asked. “Yes,” Zhenyu confirmed.

“I can’t believe it. The broadcast of religious films is usually paid for by foundations or religious organizations. I know a person who did a lot of bad things in the past. After he turned to religion and became a good person, he made a lot of money. He wanted to do good deeds to make up for his wrongdoings, so he paid to broadcast his program about Amitābha, so I helped him broadcast it. But you're not like that at all. Each episode costs 100,000 yuan and to broadcast all 30 lectures will cost 3 million. Why do you want to broadcast it?”

Zhenyu started to explain cultivation to Mr. Xie and the great health effects and improvement in his character that Falun Dafa had brought to him. Mr. Xie went out for a few minutes again. When he came back, he told Zhenyu, “I’ll help you. I have never met anyone like you. People work in society for money and fame. Many people in religions want fame or want to make up for their sins. I find that people in your group are very sincere. You are willing to pay to benefit other people. I trust you. I’ll broadcast your programs for free.”

After getting Master’s permission, Zhenyu and local practitioners broadcast Master’s lectures on Hualien Cable TV for 45 consecutive days. Mr. Xie was also in charge of the cable network in Taitung County. He broadcast the lectures and some FGM TV programs about Falun Dafa in Taitung as well. Years later Zhenyu found out that Mr. Xie had been pressured by his superiors to charge for the broadcasts, but he still persisted in helping them.

On November 15, 1997, Zhenyu received a call from Mr. Hung Chi-hung, the coordinator of the Taiwan Falun Dafa Association. Mr. Hung said he should come to Taipei to meet an important person. Zhenyu set out with a few local practitioners. It was late at night and they weren’t familiar with the roads, but another driver they met on the roadside also happened to be heading to Taipei Municipal Sanxing Elementary School and told them to follow his car. The driver led them all the way to their destination. The parking lot was filled with cars when they arrived.

Master gave a talk at Taipei Municipal Sanxing Elementary School. It was the first time Zhenyu had seen Master in person. Master was very benevolent and personable. Zhenyu asked a question about the spirit possession by foxes and weasels mentioned in Zhuan Falun and why there was not also possession by things like elephants, turtles, giraffes, or goldfish. Zhenyu remembered Master saying that there are, but just not as many.

During Master’s later lectures at Taichung Municipal Wufeng Agricultural & Industrial High School, Zhenyu remembered that Master also mentioned that there were many possessing spirits in the degenerated contemporary society of Taiwan and they had interfered with righteous cultivation practices.

Zhenyu had worked in his company’s headquarters in Taichung City several years earlier, and he had become good friends with Lai Shijun. Shijun was not very healthy at the time and often went to see a doctor after work.

In 1997, Shijun and his wife Jialin went to Hualian on a business trip and stayed at Zhenyu’s house. In her spare time, Jialin picked up the book Essentials for Further Advancement and read it. She was surprised that she couldn’t understand what the book meant even though she could read every single character. Jialin was a school teacher who had a degree in the Chinese Language. She could even read ancient Chinese literature. She was amazed that she couldn’t understand this book.

She spent almost the whole night asking Zhenyu and his wife Liqing many questions. They even changed their scheduled return date in order to finish discussing Falun Dafa. Jialin said, “I can’t leave before I understand it.”

After Jialin got home, she opened the book that she brought back from Hualien. All of a sudden, she realized she could understand it. Shijun still had some confusion, but he thought it was a good idea to cultivate himself. Both of them started practicing Falun Dafa. After practicing for a while, Shijun was surprised to find that his health problems were gone. He invited people into his home for the nine-day Falun Dafa workshops and to share experiences.

A Group of Women Who Sought the Way Find Falun Dafa

A group of friends that included Lin Fenghuan, Guo Ming’an, Guo Jinzhi, Guo Jin’er, and Shen Lixia, started cultivating Falun Dafa one after another. The women from Changhua had started seeking the Way in the 1970s and had met each other through work and close friends around the age of 18. They considered each other sisters and agreed to tell the others if anyone found the Great Way.

The women followed different teachers over the years, but later realized that those teachers were after money or women. After 20 years of searching for the Way and being swindled, Shen Lixia returned to her hometown of Yunlin. She was now middle-aged and had given up searching. She only wanted to make a living.

Lin Fenghuan and the other women stayed in Hualien and followed a teacher to cultivate. During a gathering, Jin’er told the other women that Xuexia had called her a few times, saying that she had found a righteous cultivation practice and invited everyone to practice Falun Dafa, which benefitted their health as well.

“Shall we go?” one woman asked. “Is this another practice after your money? I won’t take it unless it’s free,” another woman replied.

Jin’er explained that Xuexia had specifically told her that Falun Dafa was free. They decided to give it a try. Lixia drove with the group of women and they headed to the Fengyuan District of Taichung.

As soon as they saw Xuexia, they noticed that her formerly haggard face looked rosy. Xuexia couldn’t hide her excitement. She told them how her health and mental state had improved and strongly recommended Falun Dafa to everyone. She showed them how to do the exercises and offered her only copy of Zhuan Falun and the exercise music to them. Because Fenghuan lived the farthest from Hualien, they let her read the book first.

“Continue to practice!” Xuexia advised them repeatedly before they left. However, Fenghuan was the only one who was able to persist.

“After reading the book, I knew that it was exactly what I had been looking for. The book has spelled out cultivation so clearly,” Fenghuan said. Six months later, she attended a nine-day workshop and joined Zhenyu’s exercise group.

With Fenghuan’s and Xuexia’s continuous encouragement, Lixia and others came to Hualien for four days in the summer of 1998. Zhenyu and his wife watched Master Li’s lecture videos with the women, and read Zhuan Falun and did exercises with them. 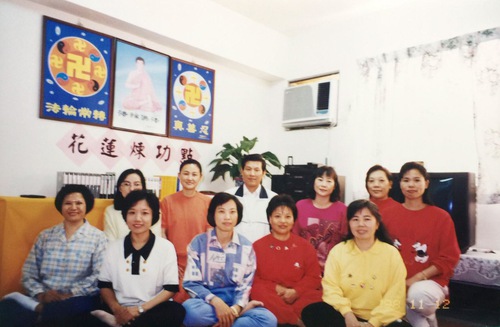 Lin Fenghuan (middle of the front row) and her friends at a Fa-study session in Zhenyu’s home.

“After watching Master’s lectures, I realized that this is what we had been looking for. Master has thoroughly explained the concepts and the relationship between cultivation and xinxing,” Lixia said.

Zhenyu encouraged the women to spread this great practice to more people.

Lixia was excited to learn Falun Dafa and had a strong wish to establish a group exercise site in Yunlin. Zhenyu gave her a large banner and a copy of the exercise music.

Jinzhi told her brother Ming’an about what she had learned during her trip to Hualien. Ming’an had learned the Falun Dafa exercises from Xuexia in 1997, but he was already seriously ill at that time and had trouble doing the movements, so he didn’t continue to practice. After hearing about Jinzhi’s experience, he realized he might have missed an opportunity in 1997. He picked the practice up again and established a new group exercise site at Ludong Elementary School in Lukang, Changhua County.

Ming’an concentrated on practicing Falun Dafa and experienced huge changes in his health. One day, he clearly felt a warm flow of energy rushing up from his spine. It continued for days. The tumor on his spine became soft, and its color changed from black to red. It eventually disappeared. His back had been hunched, but it became straight again!

“Store Owner in China: “You Have Truly Lived Well””

“Shaanxi Woman Secretly Sentenced to 3.5 Years for Her Faith”