(Minghui.org) New Zealand Falun Gong practitioners demonstrated the exercises and introduced the meditation practice in downtown Auckland on June 27, 2020. They also raised awareness of the Chinese Communist Party’s (CCP) persecution of Falun Gong in China, which has lasted nearly 21 years. 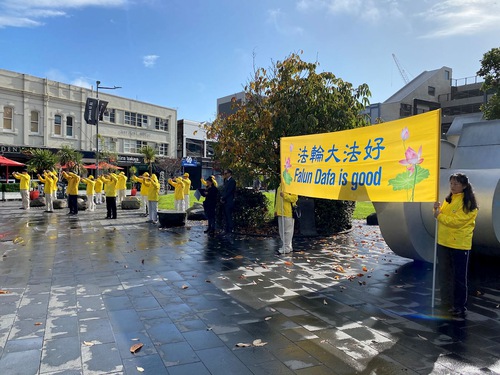 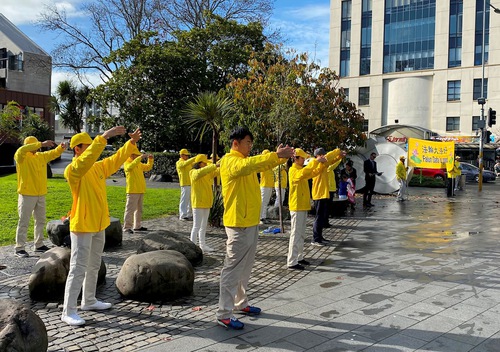 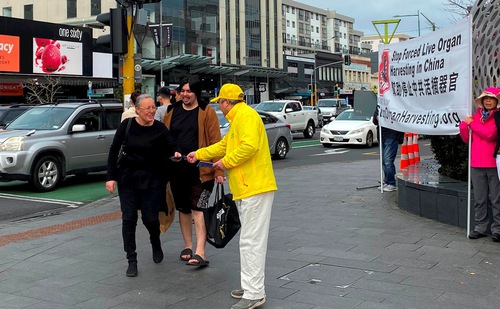 Practitioners raise awareness of the persecution.

Martine, a French teacher, took advantage of the pandemic lockdown to learn more about the human rights situation in China. “I read lots of news in French and some in-depth reports. I learned about how the CCP treats religious groups,” she said.

“The surveillance is horrible. One report said that a French reporter interviewed someone in China who disappeared the next day. The reporter was told not to conduct interviews. There are surveillance cameras everywhere in China.” 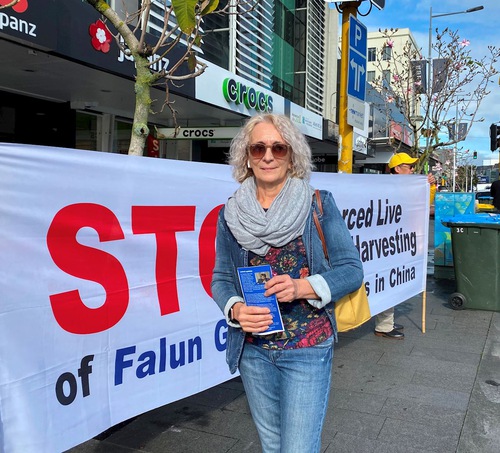 “The CCP attempts to control people’s thoughts,” Martine said. “This is crazy. I cannot believe that they are committing the crime of genocide.”

She said she’s a member of Amnesty International and that they had recently discussed human rights issues in China. She planned to share what she learned with other members. 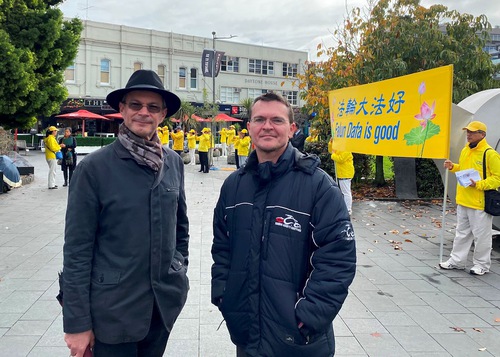 Andre and Victor stopped by to learn more about Falun Gong and the persecution in China.

Two passersby named Andre and Victor expressed their sympathy to Falun Gong practitioners in China. “It is wrong to persecute people for their beliefs and political views,” Andre said. “It is illegal to take organs without consent. Nobody should do that.”

Andre said he knew that some countries ban their citizens from going to China for organ transplants and the restrictions are justified because nobody can confirm the source of the organs.

He encouraged practitioners to continue with their efforts to educate the public about the persecution so more people can speak out and help bring it to an end.

Another passerby named James works in the health department of the New Zealand government. He said that communism sounds harmless in theory, but once implemented, it is totalitarianism with an authoritarian government.

He said he had found a well-written book on the subject, We Have Been Harmonized: Life in China's Surveillance State. He said the CCP used communism as an excuse to deceive the Chinese people and the whole world for its own benefit. It is actually a totalitarian government that has caused great inequality in China, which runs counter to communism, he pointed out.

After the event, a website administrator named Michael chatted with some practitioners and voiced his support for Falun Gong. He said that he knew about the CCP’s forced organ harvesting from living Falun Gong practitioners and felt sad that the persecution has lasted so many years. He commended the practitioners for their efforts to raise awareness.

He said the CCP does not represent China, as it hates the traditional beliefs of Chinese people. He hoped to play a part to end the persecution in the future.