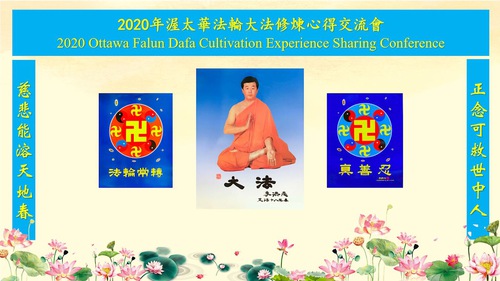 Rachel started practicing Falun Dafa with her mother in China at a young age. Despite the persecution, she clarified the truth about Dafa to her classmates, but after she came to Canada to attend college, she lost her parents’ guidance and began to pursue personal gain, just like ordinary people. She lost the courage to tell her college friends the truth about Falun Dafa, fearing they would laugh at her.

Rachel saw fellow practitioners distributing Dafa brochures several times and thought that Master was giving her a hint that she should return to cultivation. She eventually overcame her fear and started clarifying the facts to the people around her. She realized that there will always be tests on the path of cultivation and that any issue she encounters when clarifying the truth is due to her own attachments. The key to eliminating attachments is studying the Fa teachings well.

Sensing the Urgency to Save More People during the Pandemic

Lilian and Sherry shared their experience of calling people in China to clarify the truth to them.

Lilian found herself too nervous to say anything when she first started making phone calls. Some who answered cussed her out, but she knew that they had been deceived by the Chinese Communist Party’s (CCP) slanderous propaganda. She responded with compassion and continued to make calls. Her sincerity touched the hearts of many. One day, she talked with someone for over half-an-hour. Although she was on the verge of getting impatient and argumentative, she kept in mind that her goal was to awaken the person’s conscience, so she refused to give up. The person eventually decided to quit the CCP and its youth organizations.

Some people decided to quit the Communist organizations but weren’t willing to listen to the truth about Falun Dafa. Lilian wrote their phone numbers down and followed up with them. Many people were touched and thanked her for sharing the information. Some said sincerely, “Falun Dafa is indeed great.”

Sherry shared that she had different kinds of discomfort when she picked up the phone. She realized that she was very fearful and sent forth righteous thoughts to eliminate fear and interference.

Sometimes Sherry felt frustrated when someone repeatedly hung up on her. She felt that her time wasn’t being well spent, so she often listened to other practitioners’ experiences, comparing them to how she handled similar situations, and was inspired. It dawned on her that her negative thoughts were rooted in the Communist Party’s indoctrination. Sherry sent forth righteous thoughts to eliminate them and her own attachments. As she continued to improve and became more and more compassionate, her calls met with more success, too.

Cultivating While Working in English Media

Tara and Rahul shared their experience of working for an English media outlet as a reporter and editor.

Rahul had a dispute with a project manager and was put on administrative leave for a month. He realized that he had built up a lot of negative thoughts working for the English Epoch Times. During his leave, he participated in group study and promoted Shen Yun shows.

By the time he returned to his position at the Epoch Times, he realized that he had to be more careful about writing his articles to lighten the editor’s workload. “I can stand in my colleagues’ shoes to see their situation now. Making less work for them also makes my job easier.”

Tara compared cultivation to running a marathon, which requires endurance and determination to complete the long race. For her, a cultivator’s optimism comes from the joy of endurance, the joy of getting back up after falling, and the joy of correcting wrongs with the compassion of Dafa, instead of saying how terrible the world has become.

She said that optimism is critical for a marathon runner’s endurance. If she were to let herself descend into pessimism by every frustration, that would be even more weight to carry, which would increase the burden and worsen the pain. Positive thoughts, on the other hand, help by dissolving the burden and uplifting oneself.

Seven-year-old Yuanbao said that she had started doing the Falun Dafa exercises when she was three-and-a-half. She could meditate with both legs crossed for 10 minutes before she turned four. She was able to meditate up to an hour by the time she was six.

Yuanbao studied Hong Yin from the time she was three and learned many Chinese words. Her grandmother started to teach her how to read Zhuan Falun when she was five. After a year, she could read through the entire book. She was able to recite many of Master’s scriptures published in Essentials for Further Advancement.

Master’s words in Zhuan Falun often come to her mind. She was able to endure when other kids were mean to her. She would let her younger sister pick the food and toys she preferred.

Yuanbao introduced Shen Yun shows to her teachers and classmates. She has learned how to look within and eliminate her attachments.

70-Year-Old Unharmed in a Serious Accident

Lingyu, who is in her 70s, used to suffer from diabetes, high blood pressure, and a knee problem. Practicing Falun Dafa has restored her health. She shared how she was protected in a serious accident.

Lingyu and her husband were preparing for their trip from China to Canada on December 12, 2019. Lingyu held the ladder while her husband climbed up to get something from the attic. The metal ladder tipped over and fell on Lingyu’s head and legs. Her husband fell on top of the ladder, and all the weight fell on Lingyu. She passed out.

As soon as she regained consciousness, Lingyu started repeating “Falun Dafa is great” and asked her husband to repeat it with her. Both of them were fine. They knew that Master had saved their lives.

Lingyu studied the Fa and did the exercises every day. Her bruises quickly disappeared, and she could walk without any problem.

Lingyu has overcome her fear through cultivation and joined the protest outside the Chinese Embassy in Ottawa. She also distributes brochures to Chinese tourists, and makes phone calls to China, asking people to quit the Communist organizations.

“After Six Years Behind Bars, Hunan Woman Given 3.5 Years for Her Faith”

“Taiwan: “Falun Dafa Is a Stream of Positive Energy””