(Minghui.org) Falun Gong practitioners across Germany held activities marking the 21st year that practitioners in China have been brutally persecuted for their faith.

Falun Gong is a spiritual belief based on the principles of Truthfulness-Compassion-Forbearance and has five gentle exercises. An estimated 100 million people in Cina were practicing Falun Gong in the late 1990s. Fearing its popularity, however, then Chinese Communist Party (CCP) leader Jiang Zemin launched the persecution of Falun Gong on July 20, 1999.

More than 4,500 Falun Gong practitioners are confirmed to have died as a result of the persecution since it began, and hundreds of thousands have been imprisoned, tortured, and even subjected to state-sanctioned live organ harvesting.

Practitioners organized an Information Day event in Lörrach on July 18 to raise awareness of the persecution in China. 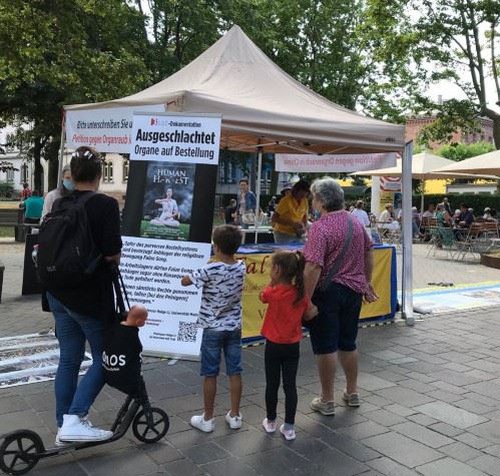 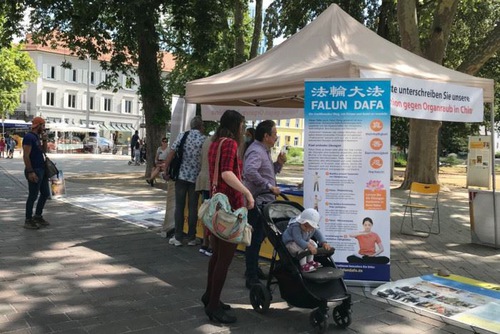 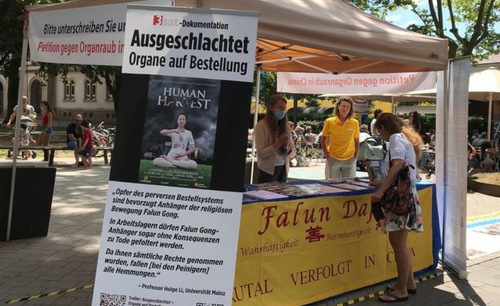 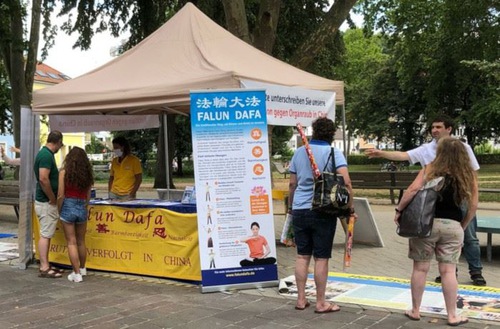 A man read the display boards for some time before talking to a practitioner. He said he had lived in Thailand for many years and loved Asian culture. He was aware that traditional Chinese culture had been destroyed during Mao’s era.

At first he expressed doubt that signature drives could stop the state-sanctioned forced organ harvesting in China. The practitioner told him that the petitions are actually effective. In the past, many Chinese hospitals openly advertised that they could provide quick organ transplants. But after many countries condemned the killing of prisoners of conscience for organs, these hospitals no longer dared to advertise openly. Some countries also banned their citizens from traveling to China to obtain illicit transplants. The man was encouraged and signed the petition.

A young American asked a practitioner if he could explain what they were doing in English. The young man explained that he had lived in China with his parents when he was a child. He said he knew about Falun Gong but it was his first time hearing about forced organ harvesting.

A practitioner spoke with him about the independent investigations into forced organ harvesting and how the European Union had passed several bills calling on the Chinese regime to immediately stop the practice. The young man signed the petition and thanked the practitioner.

Practitioners held an Information Day event and signature drive at the Marktplatz in downtown Karlsruhe on July 18.

A woman stopped to speak with a practitioner. “I noticed your booth has a pure and strong spirit. People in heaven are watching you. You must continue because the world needs these values, Truthfulness-Compassion-Forbearance. The challenges on your path can only harden your will to achieve them,” the woman said. 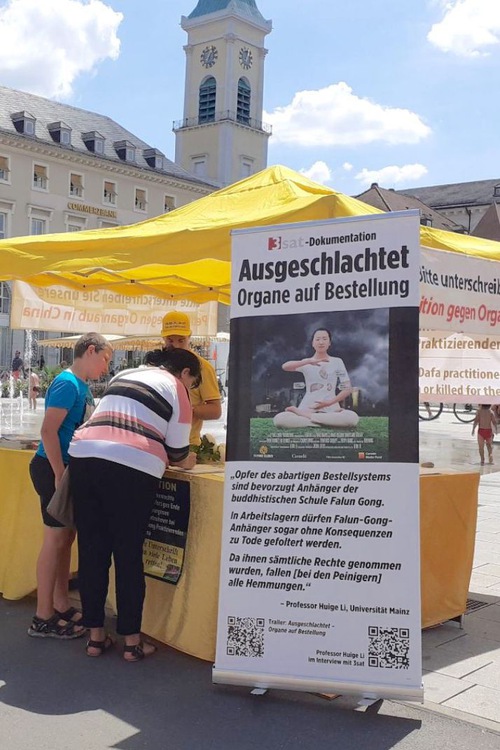 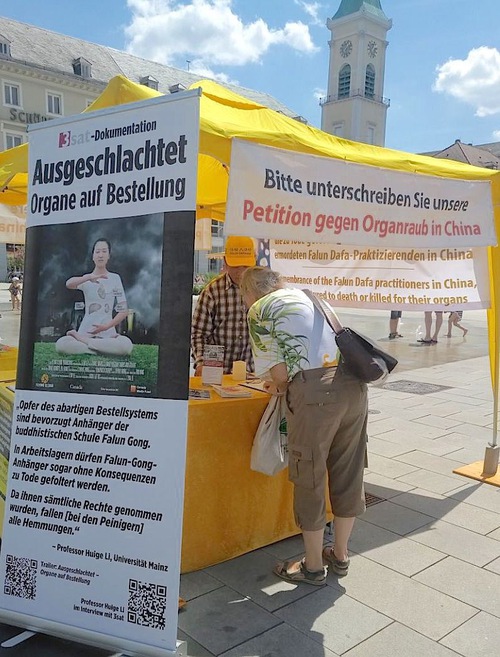 Falun Gong practitioners hold an Information Day event and signature drive at the Marktplatz in downtown Karlsruhe on July 18, 2020.

Practitioners collected signatures and demonstrated the Falun Gong exercises at the Marktplatz in Bremen on July 20, 2020.

Falun Gong practitioners hold an Information Day event and collected signatures at the Marktplatz in Bremen on July 20, 2020. 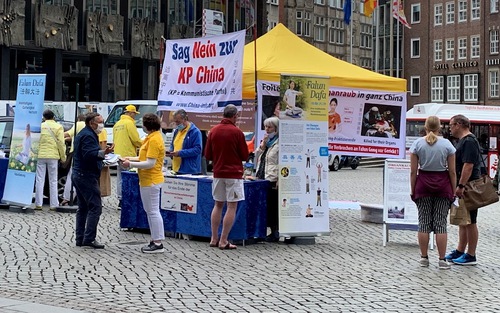 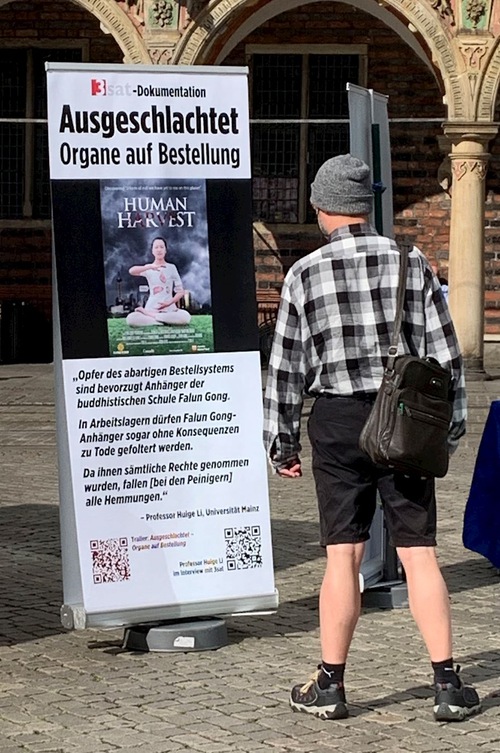 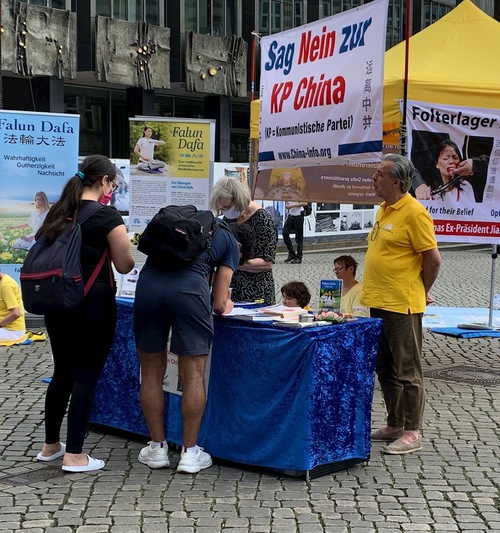 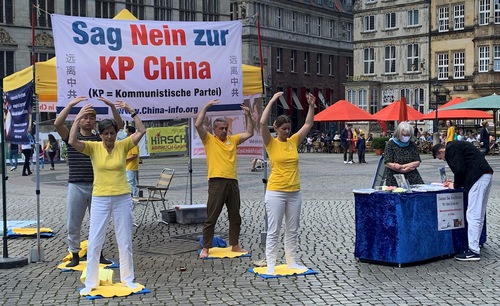 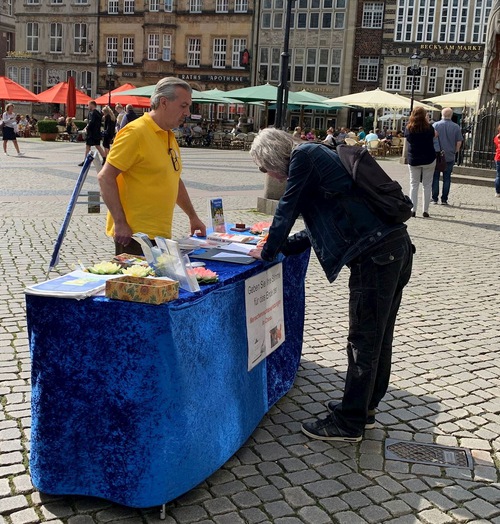 Christian Daniel, an engineer, spoke with a practitioner and said that he believed Chinese people desire freedom and want to live their lives with their own wills, without a totalitarian regime to tell them how to think and live.

Local entrepreneur Enzo Buß told a practitioner that he thought the Chinese Communist Party wouldn’t last forever. “They do these things because they are scared, even though they have armies, police and surveillance,” he said. 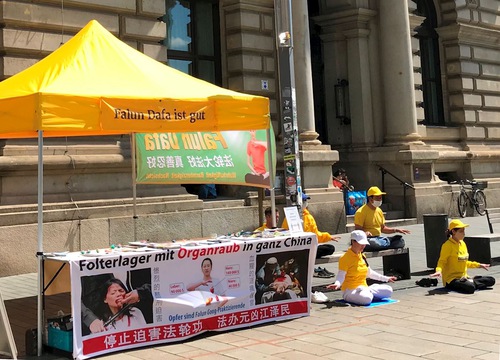 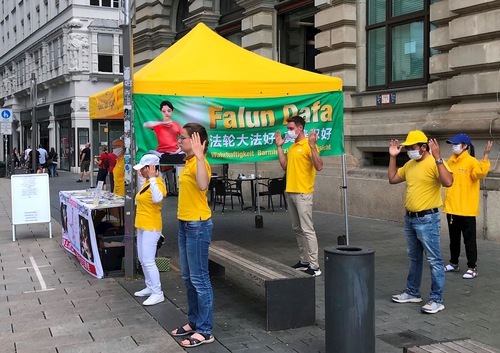 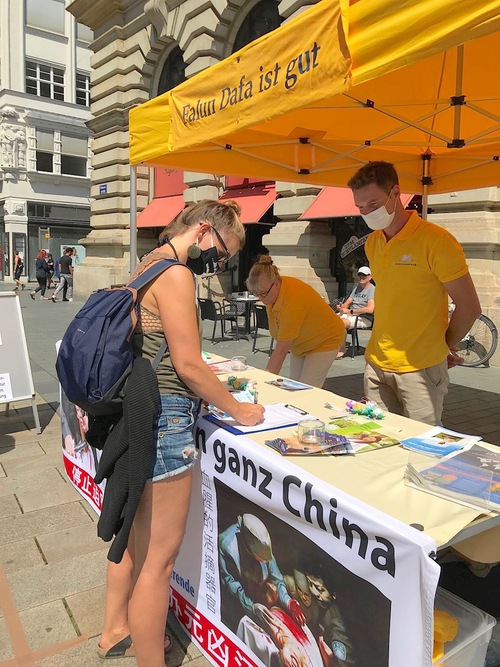 A history teacher signed the petition and told a practitioner that he had discussed the forced organ harvesting crimes with his students. He took some printed materials and planned to hold more discussions about the persecution with his students.