Many people immediately signed the petition and condemned the persecution. 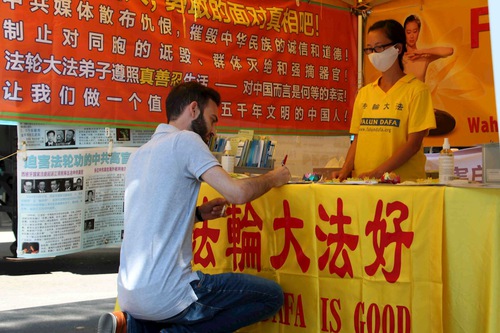 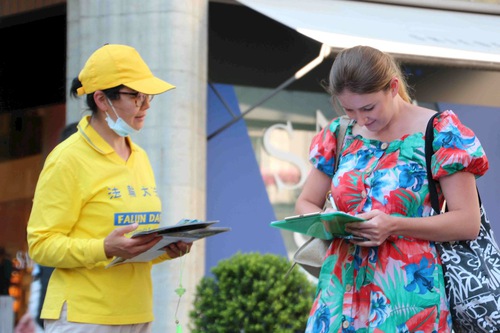 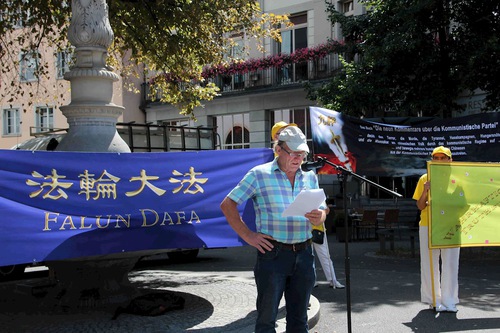 Zurich Canton Council Member, Urs Hans, spoke during the rally in support of Falun Gong. He said, “Everything was very peaceful at the beginning. I still remember the scene on TV of hundreds of people practicing the exercises in the park.

“Falun Gong is so peaceful, and the regime even encouraged people to practice. When Jiang Zemin (a former CCP leader) realized Falun Gong could free people physically and mentally, he felt threatened by it because the CCP maintains its rule by autocracy and violence. Since then, the extremely brutal persecution against Falun Gong has been carried out to this day.

He also pointed out that the CCP established the 610 Office on June 10, 1999 to eliminate Falun Gong. The function of this office is similar to the Nazi’s Gestapo in Germany. He described the CCP’s extensive use of torture and the crime of harvesting organs from living Falun Gong practitioners.

Hans said, “We must take action to publicly condemn the CCP’s inhumane acts. We are here today to remember history. We cannot keep silent in exchange for economic interests.

“The great expansion of the CCP’s power all over the world today is largely due to the fact that our corporations have put their important production resources in China, and thus rely on the CCP more and more. We sacrificed ethical and moral values, and our independence, for short-term economic gain.

“To help Falun Gong practitioners who are voiceless and persecuted in China for their belief, it is not enough to just commemorate those killed and harmed by the CCP’s terrorism, we must do something!

“We should be strong and firm in Switzerland and Europe, work hard for freedom of speech, economics, academic conversations, and global human rights, otherwise we will also soon fall into the hands of the CCP’s dictatorship.

After the speech, Hans told Falun Gong practitioners that he was planning to raise questions with the Zurich cantonal government. He said, “We should increase our efforts to investigate and expose the persecution, and to report more on the CCP’s dictatorship. 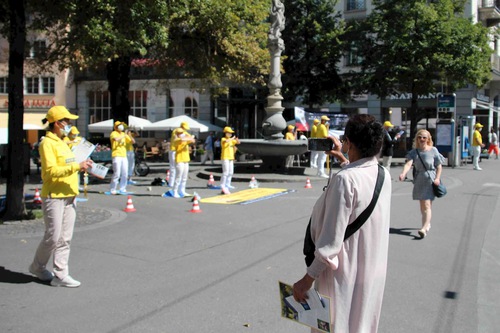 Inge intends to share the recording with relatives and friends in Brazil.

Inge from Brazil is a school assistant. She filmed the speeches and exercise demonstrations on her phone, and said she would share them with her relatives and friends.

She said that she had some understanding of Falun Gong, “I was very interested and I tried the exercises. I felt very good. If we all practiced Falun Gong we would benefit from it and become healthy. I hope Falun Gong can spread more widely so that we can have more understanding of life. I will continue to practice. People should read more about Falun Gong. It is very important.”

She believes Falun Gong has the power to help people become good, and that is why the CCP persecutes it.

She signed the petition to voice her support. “I hope many people will sign, because it is very important. I will send these videos to Brazil. People in Brazil should also keep our eyes open and not be infiltrated by the CCP.

“I hope this event will have a greater impact. We can help our brothers on the other side of the world with our signatures. Saying no to the CCP by giving our signatures is so simple and doesn’t cost a penny, and we help each other by doing this. I think it’s great.

She thanked practitioners for holding activities like this to clarify the facts to people. “I think it’s great you hold these activities and keep explaining what is happening.

“We Can’t Turn a Blind Eye”

Local resident Mr. Fatih Kula had read a report the day before about the persecution of Falun Gong. He said, “I could hardly believe this is happening, but it is true!”

Referring to the CCP’s crime of organ harvesting, he said, “This should not have happened.” He signed the petition to support Falun Gong practitioners.

He said, “Although we live in a far away and safe place (without persecution), we cannot just sit idly when such a cruel thing is happening. I want to sign this (petition to stop the CCP’s organ harvesting) to help. I don’t know how effective it will be, but it is very, very important to take action. We’re letting people (Falun Gong practitioners) know that someone is willing to work with them and support them.”

Act Together to Stop the Persecution

Ms. Grob signed the petition and said, “Live organ harvesting is awful, very bad. I can’t express what I feel in words. I cried.” She wiped away her tears and continued, “I feel so helpless. Even though we are far away from China, we should still call people’s attention to this matter, and collect as many signatures as possible.”

She hopes something can be done, “I hope enough signatures will be collected and some measures can be taken to stop this. Signatures alone are not enough, but if there are many signatures, we can move forward.”

Physiotherapist Yvonne also hopes something will be done to stop the CCP’s crime of live organ harvesting, “I was deeply touched by their (Falun Gong practitioners) speeches. I signed my name and hope people can know about this (the CCP’s live organ harvesting) and take measures to stop it.”

She said, “Persecution should not occur anywhere in the world, especially the persecution of these Falun Gong practitioners who don’t harm anyone.”

She plans to share what she learned with more people, “I think unfair treatment must be exposed, and criticized.”

A retired high school teacher knew Falun Gong had been persecuted for 20 years. After signing the petition, he said, “I hope my signature can help practitioners.” 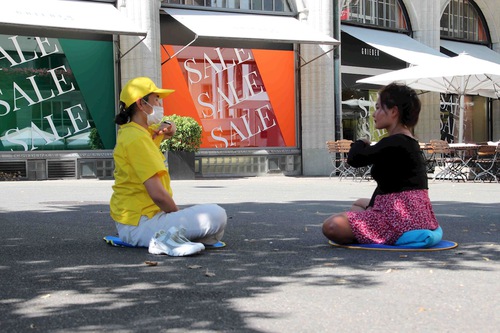 When she noticed Falun Gong practitioner’s activities, nurse Zharkyn was very happy and immediately got off the tram and walked back to learn more. She said she found the book Falun Gong on the Internet. She followed the online instruction video and learned Exercise Two.

She has not read the entire book and learned only Exercise Two, but she said she already felt positive energy. “I actually felt my palms get warm and I felt strong energy.

“I went to another clinic to work after a night shift, without any sleep in between, but I didn’t feel tired. It was because I practiced Falun Gong. I had some back pain, but since I practiced Exercise Two, my back pain left. I have so much energy now.”

She hopes to attend group practice and learn all five sets of exercises. Before leaving, she said happily, “I am very grateful to learn the correct movements. I will attend the group practice regularly.”