(Minghui.org) Falun Gong practitioners held a rally and other events on July 17, 2020, to mark the 21st anniversary of peacefully protesting the Chinese Communist Party’s (CCP) persecution. They conducted activities at five locations, and called on kindhearted people to help stop the persecution. 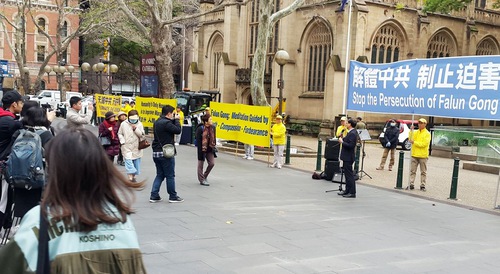 Several people addressed the rally at Sydney’s Town Hall at 12:30 p.m. They commended the practitioners’ courage and perseverance. They also called on the Australian government and politicians to work together to stop the CCP’s state-sanctioned organ harvesting from living Falun Gong practitioners. 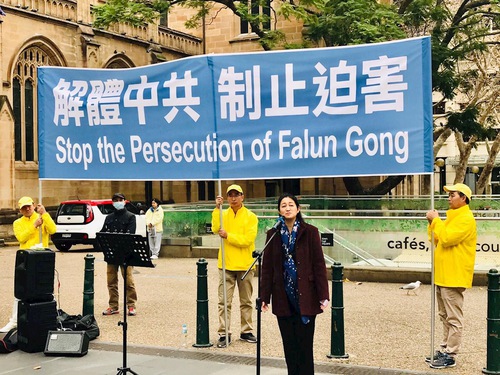 Dr. Lucy Zhao, director of the Australia Falun Dafa Association, condemned the CCP’s 21-year-long persecution and called for people to help stop it.

“Falun Gong practitioners follow the principles of Truthfulness-Compassion-Forbearance to be better people,” Zhao said. “They are imprisoned, tortured, and killed for their belief. Twenty-one years ago, the CCP initiated the persecution and even conducts live organ harvesting for lucrative profit, an unprecedented crime on this planet.”

“Facing this crime, do we choose justice or evil? There is no middle ground. We must make a choice. We must speak out for human rights and justice.”

“Do not denigrate our power as individuals. Water constantly dripping can wear down stone. We are just like that dripping water. As long as we work together and persevere, the CCP will end.”

“When history opens a new chapter, we can proudly tell our children and grandchildren that although we lived through difficulties, it was a great historical moment, because we always chose to stand with justice!” 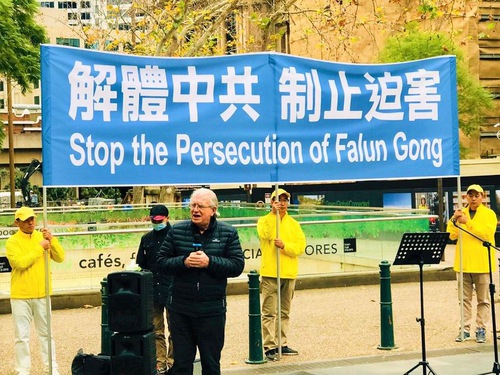 The Rev. Bill Crews AM, chief pastor of Ashfield Diocese of Unity Church

During the rally Rev. Bill Crews AM said that he could not remain silent while Falun Gong practitioners are being persecuted and even die in the persecution. He said he was against the CCP regime, but not the Chinese people.

He said Falun Gong practitioners have basic rights and freedom, like everyone else. 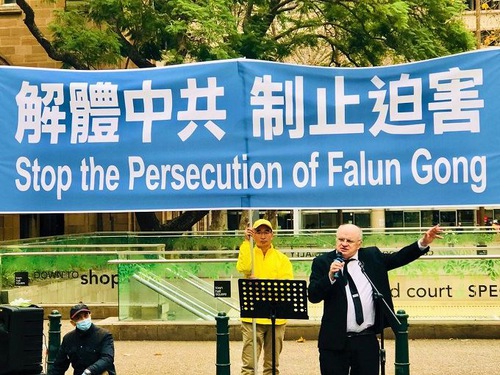 “I have participated in Falun Gong practitioners’ rallies against the persecution for years,” Councilor Cr Andrew Wilson said. He said the persecution cannot last long, and pointed out that the CCP regime has lots of experience in damaging people’s character.

He commended the practitioners’ perseverance in protesting the persecution. He predicted that Chinese people would seek out the principles of Truthfulness-Compassion-Forbearance in the future.

Working Together to Eliminate the CCP 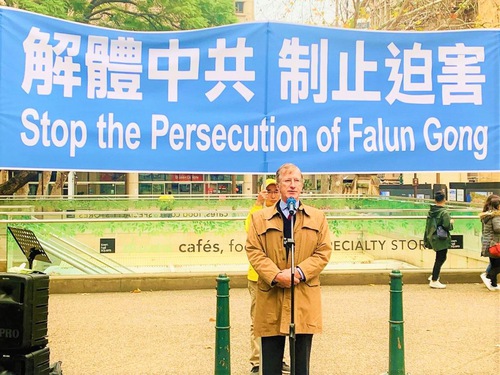 He pointed out that media around the world turned a blind eye to the persecution for fear of the CCP’s retaliation. Many countries treat it as a normal government, which is the main reason that the regime has not been brought to justice.

He called for everyone to work together to eliminate the CCP - so that Chinese people can enjoy freedom of speech and freedom of belief. 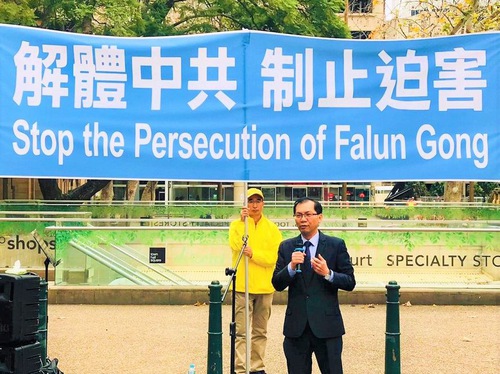 Paul Huy Nguyen, president of the Vietnamese Community in Australia, NSW Chapter, condemned the CCP, and called on the Australian government to help stop the persecution and live organ harvesting. 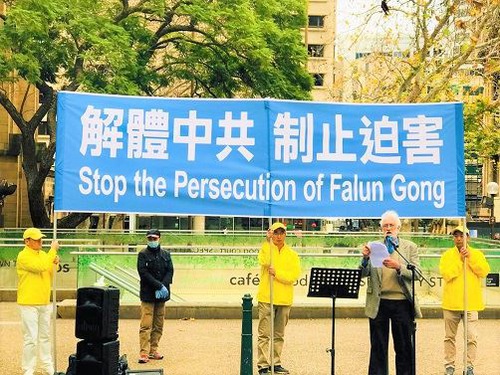 Bob Vinnicombe, human rights activist and editor of the China information website, addressed the rally and condemned the CCP regime. 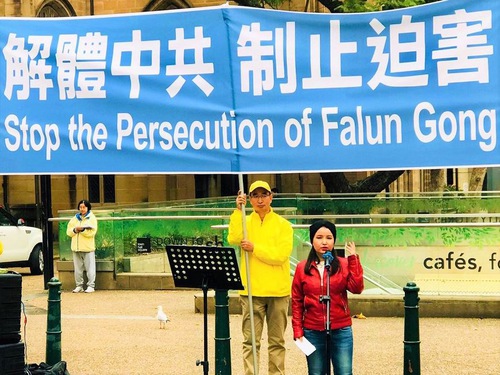 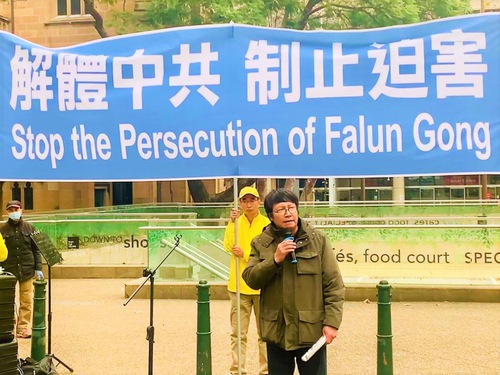 Qing Pan, founder of Sound of Australia for China, said Falun Gong brought hope to human beings. He said eliminating the CCP would save the world. 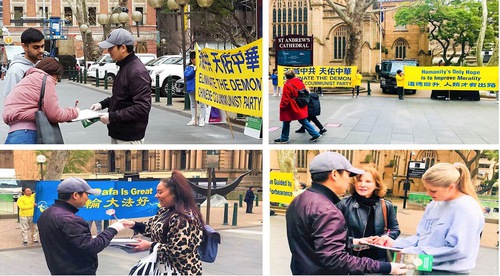 Raising awareness at the Town Hall 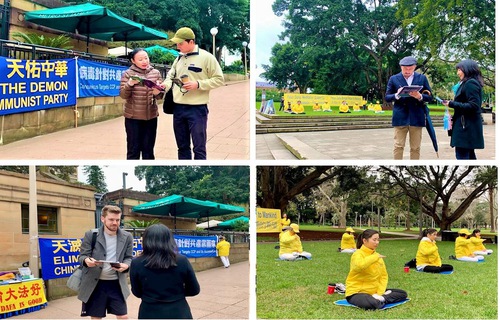 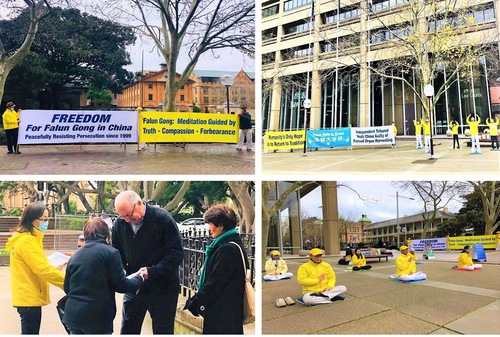 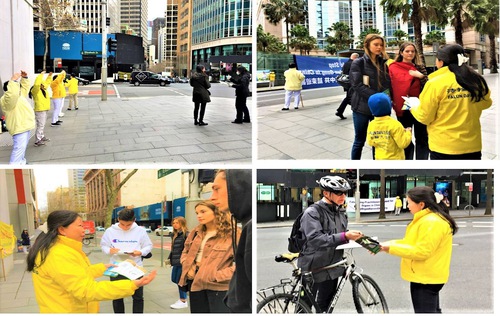 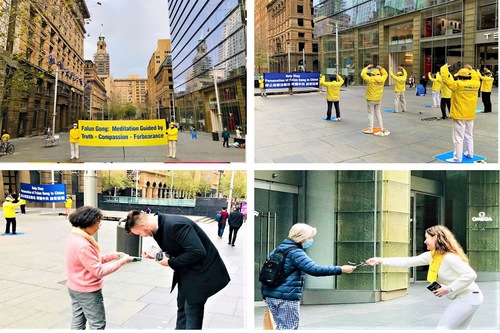 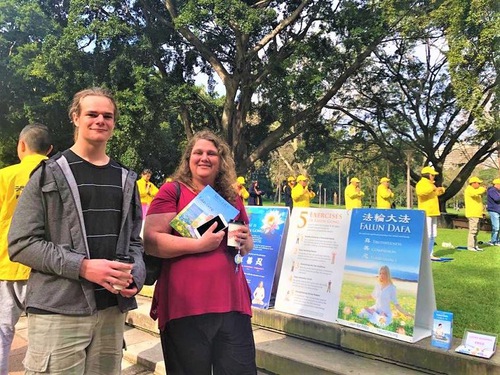 Cath Jackson and her son were happy to see practitioners doing the exercises at Hyde Park. 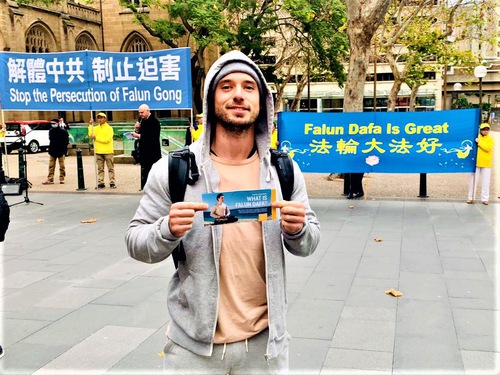 Adam Muller said, “We need to let more people know about this persecution.” 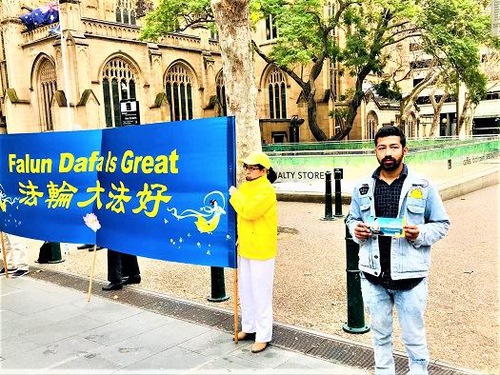 Dabess Adsikari said, “Truthfulness-Compassion-Forbearance can help each of us to become a better person.” 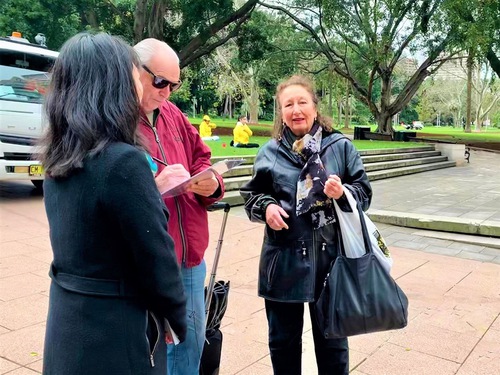 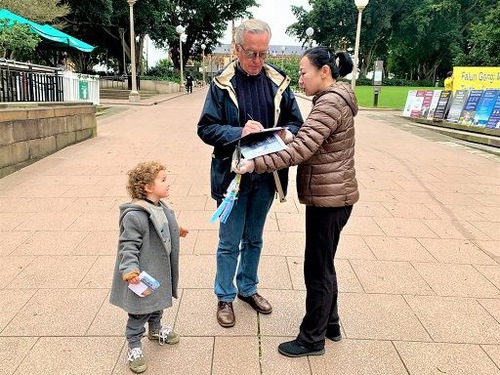 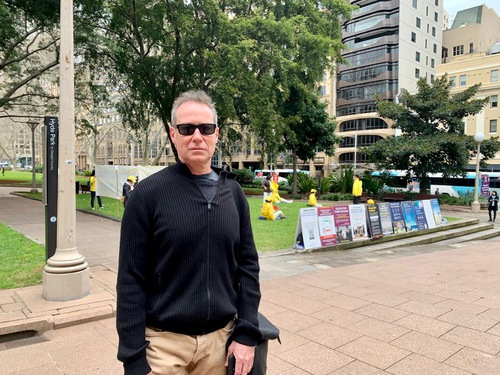 Mat Broom condemned the CCP and signed the petition against the persecution.

“Two Hebei Residents Still in Detention Months after Their Arrests”