(Minghui.org) To commemorate Falun Dafa practitioners’ 21 years of peaceful resistance to persecution in China, practitioners from San Jose and Milpitas, near San Francisco formed a convoy of vehicles. They stopped at multiple Chinese superstores in two cities and passed out information. Many Chinese people were happy to learn the facts and withdrew from the Chinese Communist Party (CCP). 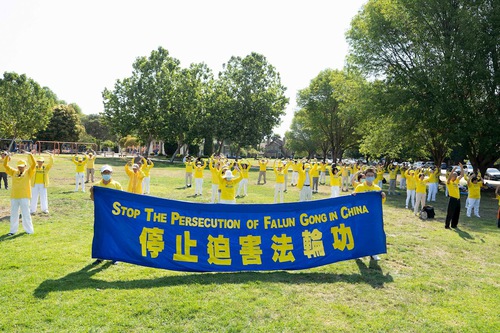 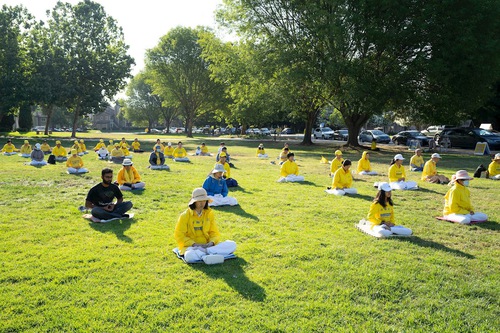 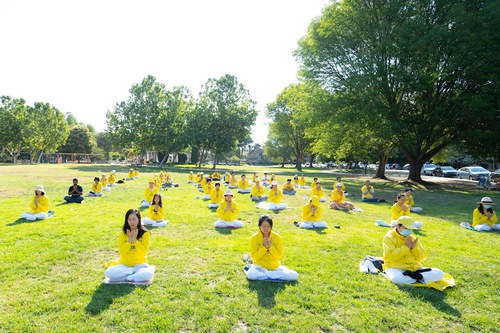 Practitioners do the exercises at Townsend Park in Silicon Valley. 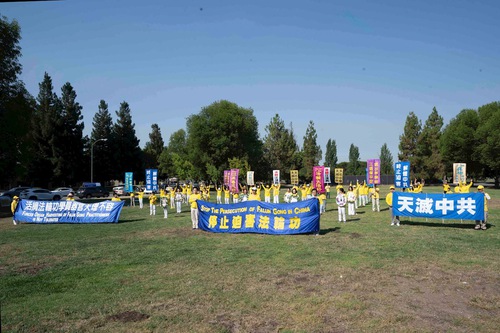 Practitioners asking to end the persecution. 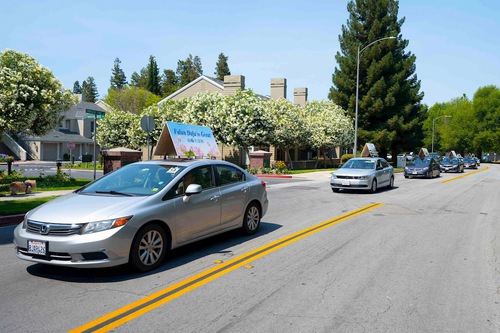 The convoy of vehicles sets off on their mission to tell people the facts about Falun Dafa. 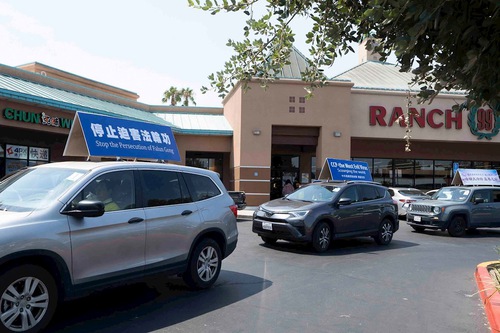 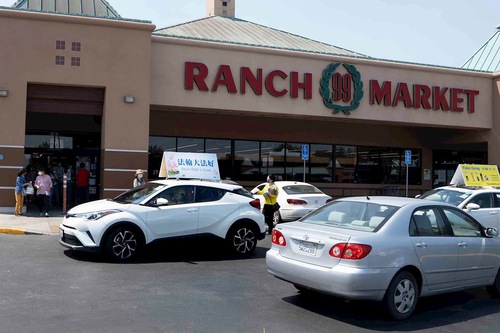 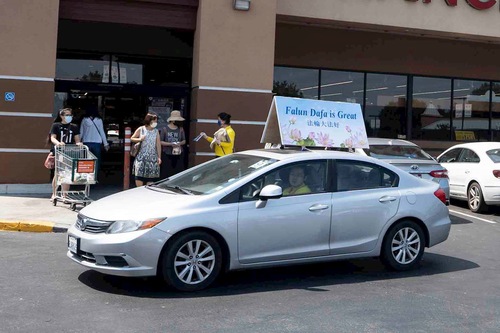 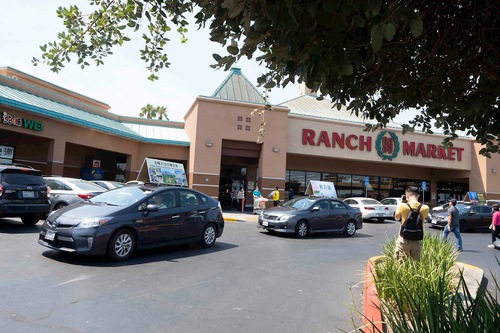 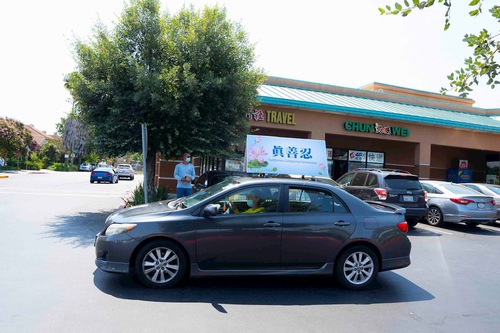 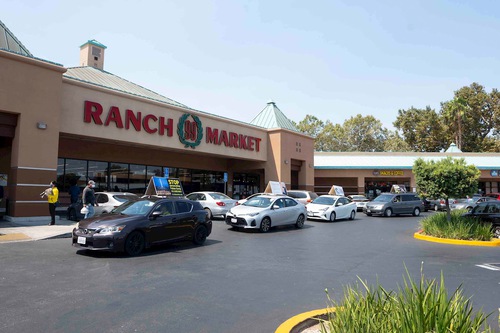 The convoy stops at a popular Chinese superstore in San Jose. 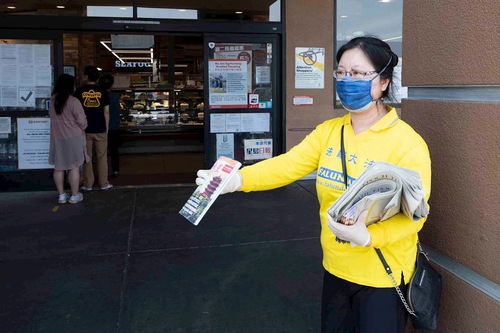 Practitioners pass out informational materials in front of a Chinese superstore.

Practitioners began their day in Silicon Valley, by practicing the exercises at Townsend Park. They shared the information materials with people who were there. They then set off and drove around the downtown areas of Bay Area cities. Each vehicle carried signs with messages such as “Falun Dafa is Good, Truthfulness-Compassion-Forbearance is Good” and “Heaven Will Eliminate the CCP.” Some people stopped and took photos of each sign.

When Mr. Chen from China noticed the sign, “Killing Practitioners for Their Organs Is an Intolerable Injustice,” he asked a practitioner whether organ harvesting was really taking place in China. The practitioner told him that the CCP has been killing practitioners for their organs since they started persecuting Falun Dafa and have never stopped. Many practitioners were tortured to death simply because they chose to uphold the principles of Truthfulness-Compassion-Forbearance. Mr. Chen was shocked when he saw the photo of a practitioner who died from persecution.

He said that he had read news about the U.S. government planning to prohibit CCP members and their immediate families from entering the U.S., and that they would expel CCP members and their families who currently reside in the U.S. When he learned that practitioners were offering to help him renounce his Party membership, he immediately withdrew from the Communist Young Pioneers and the Communist Youth League.

Many Chinese Wish to Withdraw from CCP 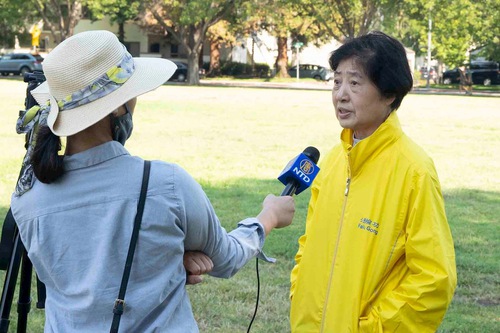 She usually suggests they use a pseudonym and that she will not disclose their information to others. If they need to, they can also get a certificate to prove that they've withdrawn from the Party.

Ms. Yang said that Mr. Wang, who came to U.S. six months ago, phoned her yesterday and said that he had thought the CCP would build a new, and better China, but to his disappointment, the CCP deceived thousands of kind people. He wanted to quit the CCP long ago after seeing the huge crimes the CCP committed. He simply had no way to quit. He was very happy that Ms. Yang was there to help him declare his withdrawal. He said it was his lucky day and that the CCP is evil.

Ms. Yang said that she's highly motivated to help people step away from the Party and remember that Falun Dafa is good. She had terminal cancer, but after she began practicing Falun Dafa, it was resolved. She explained, “I’m a living miracle and I will validate Falun Dafa as long as I live.”

She said that the CCP hiding the coronavirus shows the Party’s true, evil nature to the entire world, “The CCP will collapse. As a person who benefited from practicing Falun Dafa, it’s my duty to raise the awareness of this persecution, to share the facts with people, and help them awaken from the CCP's lies and have a beautiful future.”

New Practitioner: CCP’s Persecution Is Not a Small Matter

Mr. Vijay Kumar is a computer engineer. He said he always wanted to meditate, so his coworker told him about Falun Dafa. “I always had a very good opinion of my coworker. I admire the way he treats people and handles things. Out of curiosity, I asked him why he was so kind. He told me it's because he practices Falun Dafa.” 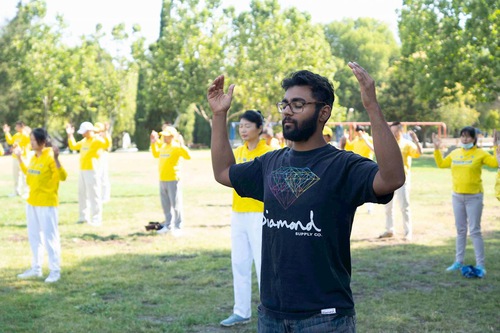 He began to read Zhuan Falun, the core teachings of Falun Dafa, and started practicing the exercises. He's now been practicing Falun Dafa for over six months. He said, “After I begin practicing, I experienced many positive changes. Falun Dafa teaches me to value morality, to have a compassionate heart, and to be responsible. My family noticed these changes and now like to be around me.”

Vijay recommended Zhuan Falun and said, “You will find answers in the book to many questions you’ve been searching for. The answers are all in this book and are straightforward.”

Many Chinese People Are Awakening

Mr. Wang Yunbo began practicing Falun Dafa in 1997. He was in his junior year at Lanzhou University in 1999 when the CCP began to persecute Falun Dafa. Because he refused to give up his faith, he was dismissed from the university, detained, and sentenced to eight years in prison. He was imprisoned for a long time and was subjected to mistreatment. Twenty of his practitioner friends were also imprisoned and tortured. 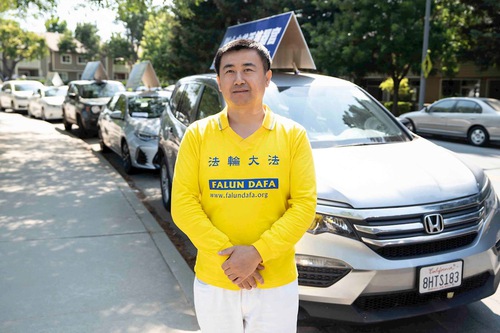 Mr. Wang said, “We are here to remind people that practitioners have peacefully resisted this persecution for 21 years. We hope to let people see the beauty of Falun Dafa and tell them of the CCP’s persecution. Practitioners resist the persecution with peace and rationality. We hope people will see practitioners’ great compassion and forbearance. We also wish to encourage Chinese people.”

Mr. Wang said that he’s relieved that many Chinese people are awakening and choose to quit the CCP and it’s affiliated organizations. By doing so he feels they will have a wonderful future.