(Minghui.org) On July 20, 1999, the Chinese Communist Party (CCP) launched the persecution of Falun Gong, which continues to this day. To raise awareness of this cruel reality, practitioners in Toronto demonstrated the exercises and held truth clarification activities in 16 Toronto city parks on July 19, 2020. 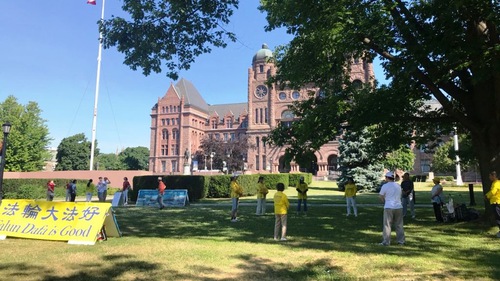 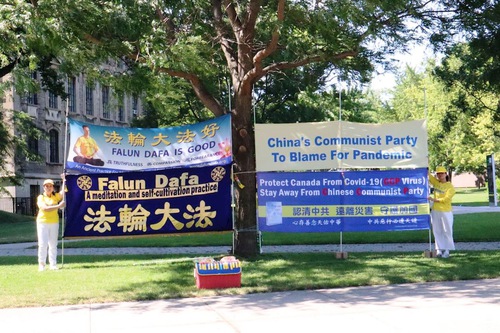 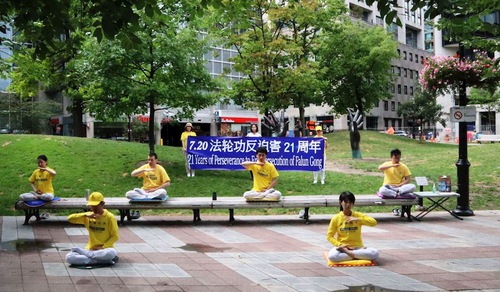 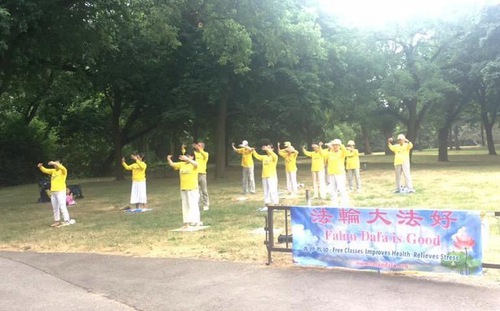 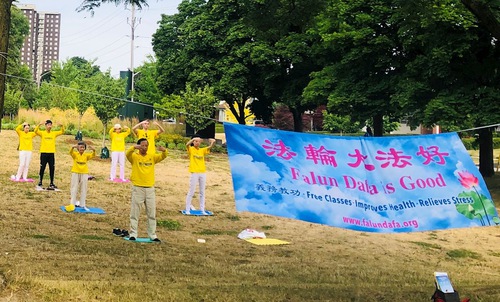 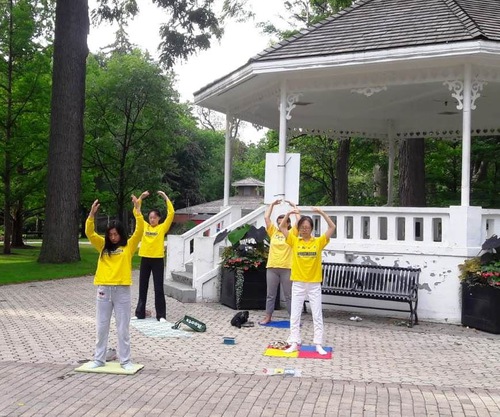 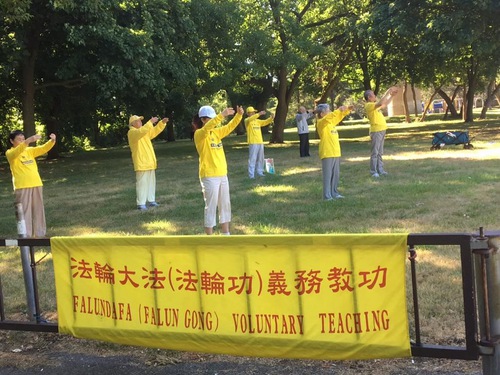 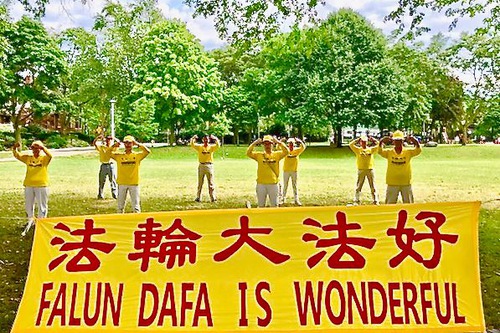 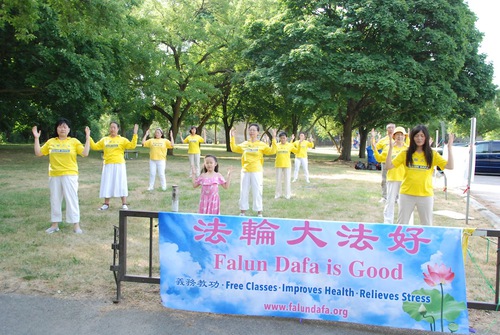 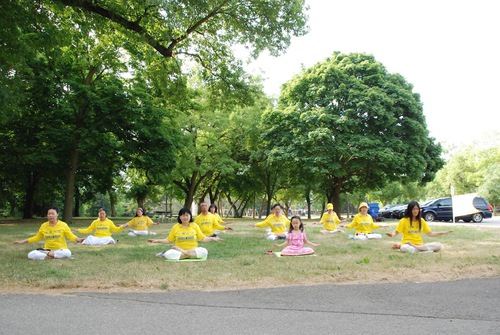 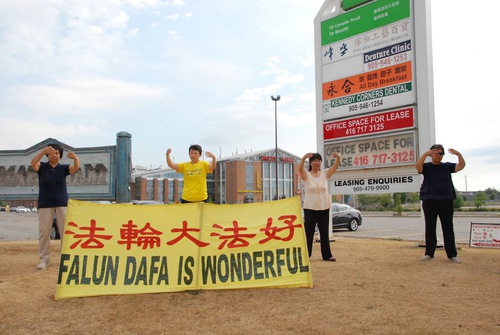 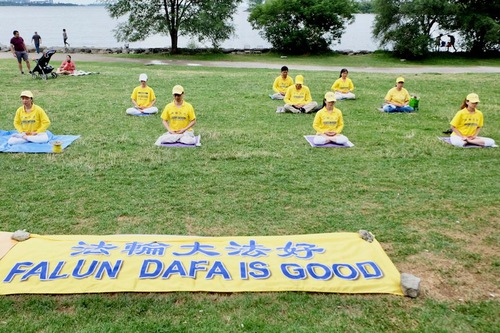 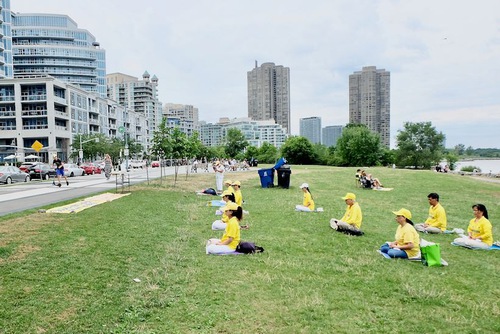 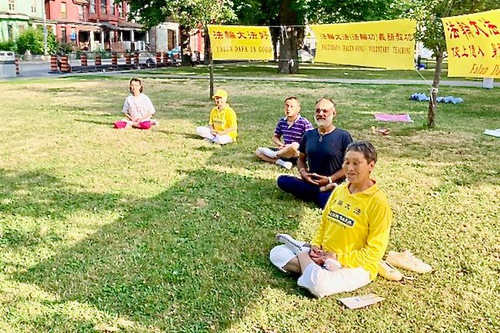 Practitioners in Toronto demonstrated the exercises and held truth-clarification activities in 16 city parks in Toronto on July 19.

On the afternoon of July 19, 2020, Toronto's sky was full of dark clouds and thunder, and it started to pour at 1 p.m. But just before the exercise demonstrations were scheduled to begin at 3 p.m., the rain stopped. The cool breeze and melodious exercise music attracted many people who stopped and asked about Falun Gong. Some said they wanted to learn the exercises. 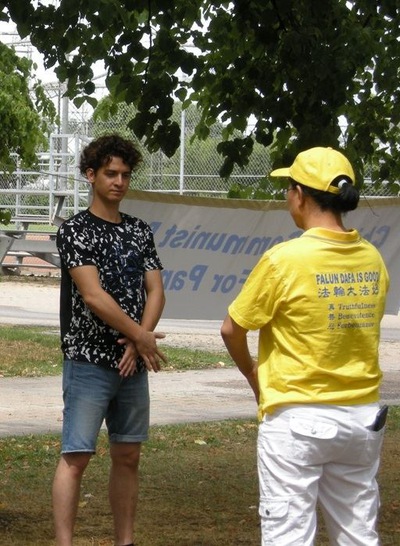 At Hendon Park, Mr. Tewtu Erd, a Toronto building designer, said he was attracted by the peaceful scene of practitioners’ demonstrating the exercises. He asked to learn the exercises and exclaimed, “This is very good. The movements are simple to learn and it makes me feel calm. I feel very strong energy and it makes me feel very comfortable. I live near this park. I’m going to learn to practice Falun Gong.”

Event Coordinator: Plans to Join Practitioners in Their Exercise Demonstration 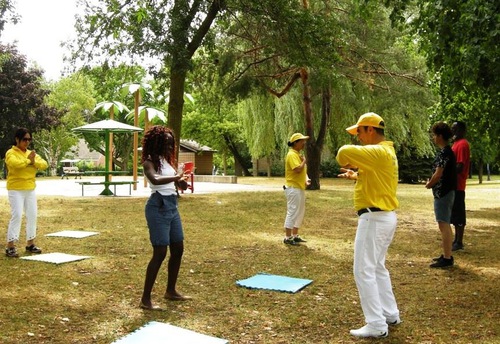 Ms. Stacey Chikoto (second from the left) said that the exercises relaxed her.

Mr. Erd and Ms. Chikoto said they would come to learn the exercises on the weekends.

Montreal Doctor: The CCP Has No Right to Take Away a Person’s Freedom to Practice Falun Gong 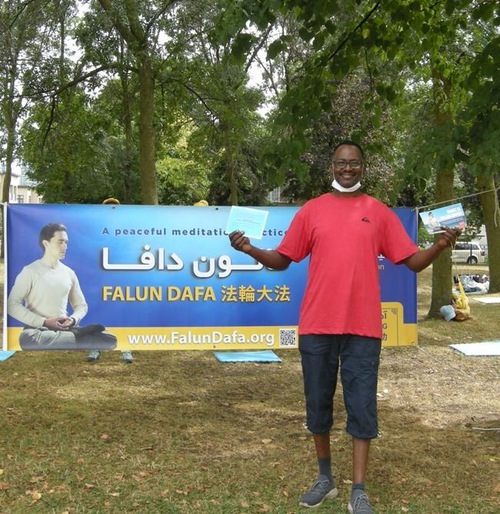 Montreal doctor Mr. Ali Avbeliskhi was visiting Toronto when he noticed practitioners in Hendon Park. He said he was attracted by the colorful banner and decided to take a closer look. After he heard how Falun Gong is being persecuted by the CCP in China, Dr. Ali said, “This is a very good practice—very beneficial for health.

“I really like Chinese people and the Chinese culture, but I do not like the CCP. The CCP is a dictatorship. It deprives people of their right to democracy and freedom. Practitioners should have freedom to practice Falun Gong. It should be the same in China. The CCP does not have the right to deprive practitioners of their right to practice Falun Gong in China.”

How Can I Help the Falun Gong Practitioners? 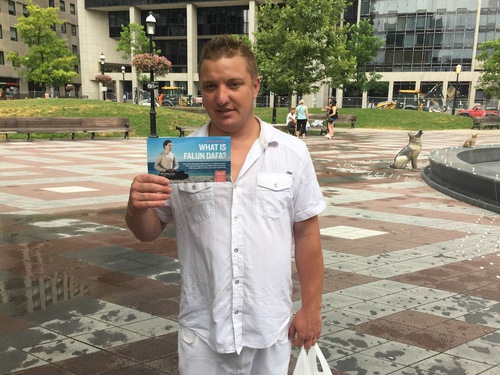 He asked what he could do to help. A practitioner said, “Please let more people know about the persecution of Falun Gong. Just like the coronavirus matter, the CCP has been covering up the truth about the virus right from the start. This not only harmed people in China, it also caused the virus to spread to the rest of the world and harmed people around the world.” Mr. Kuczek agreed. He copied down the Falun Gong website address and said that he would learn more about it at home.

Harry, a nearby resident, stopped to watch the exercises. He said, “I know about Falun Gong and that it is being persecuted by the CCP. I’ve also heard about the live organ harvesting. That is really hard to believe!” When he found out that July 20, 2020, marks 21years that practitioners have been persecuted, he said, “You are all doing a good job. I’ve been to China twice. I went to Beijing both times and also to other provinces. The Chinese people and the CCP are totally different. The people are very friendly. Under the communist regime, there is no freedom in China. A person could be sent to prison if he does the exercises in public.” He signed the petition to call for an end to the persecution in China.

Telling People about the Persecution Until the CCP Collapses 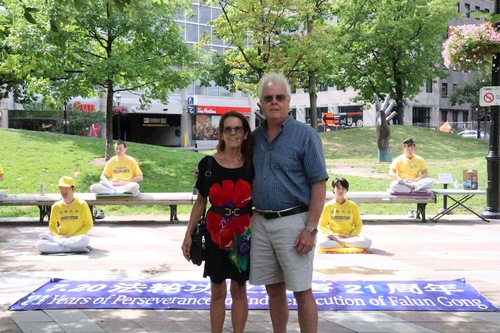 Mr. and Mrs. Rowlands said, “This is not the first time that we've heard about Falun Gong. We have heard about this for several years. We pay attention to world news and we've also been in Hong Kong. We know what is happening.”

Mr. Rowlands said, “I have known about this persecution for at least 8 years. I know that they] [practitioners are being persecuted in China. And the matter in Hong Kong last year—this is all too horrible.” Mr. Rowlands said that live organ harvesting is a criminal offense and “China's laws change by the day. It can be like that today and tomorrow it may be different. There is no principle when it comes to the laws in China. Its laws are just verbal 'orders.’ I hope that Falun Gong practitioners continue doing what they do until the CCP collapses.”

Mr. Tony and his friend took out their phones and recorded practitioners as they did the exercises. Mr. Tony said, “I know they (Falun Gong practitioners in China) live in a communist dictatorship. Cruel persecutions are happening there.” After learning that practitioners in China are having their organs harvested while they are alive, he said, “I am really glad that you are here in Canada to speak out for them.”

When Ms. Bowdidge saw practitioners handing out brochures, she asked, “Do you need my signature?” She said that she knew about the persecution in China and she wanted to do her part to help. When she heard about the live organ harvesting from Falun Gong practitioners, she said, “The CCP is really crazy.”

When practitioners were demonstrating the exercises in Riverdale Park East, Mr. Ye stopped and watched for a long time. A practitioner approached him and learned that he came from Fujian, China. Mr. Ye said that, during the 1960s, his grandfather was also persecuted by the CCP. He said, “I know that the CCP did a lot of bad things so I believe that Heaven is definitely going to annihilate it. One must quit the CCP organizations in order to be safe. I have already quit.”

He said that he loves China's traditional culture and said, “I know that Falun Dafa is good. It makes people healthy and helps them regain their morality. Are you still practicing here next week? I will come and learn the exercises.”

“Taiwan: Government Officials at Rallies and Candlelight Vigils Condemn the 21 Years of the Persecution of Falun Gong”