(Minghui.org) Twenty-one years ago on July 20, 1999, former Chinese Communist Party (CCP) leader Jiang Zemin launched an unprecedented and brutal campaign of persecution against Falun Gong. Since then, millions of innocent families have been destroyed.

The CCP's suppression of the universal values of Truthfulness-Compassion-Forbearance has continued to this day, even during the coronavirus pandemic. To mark the 21st anniversary of the day the persecution began, Falun Dada practitioners in Queensland held a rally on July 18 in Brisbane Square in the city center. They demonstrated the exercises and displayed banners to let the public know why they were there. They also collected signatures on a petition condemning the persecution. 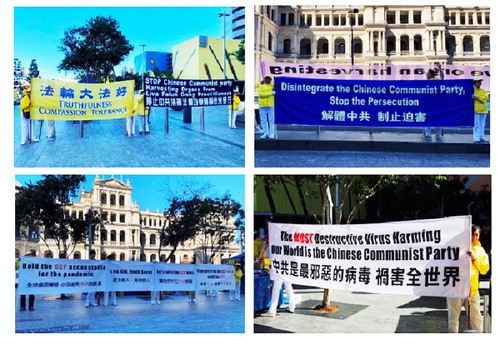 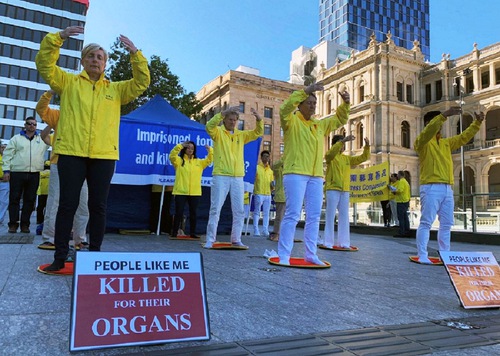 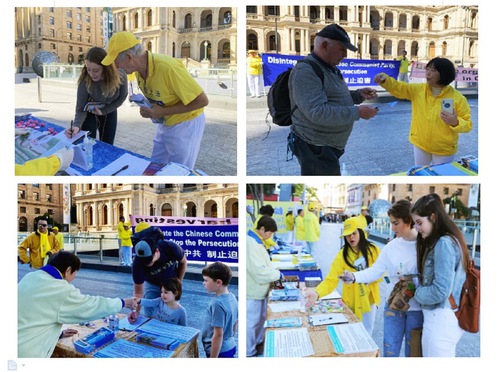 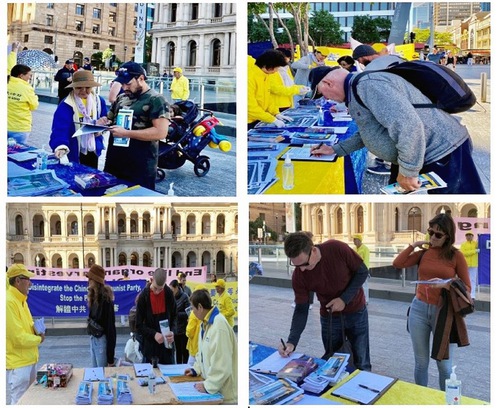 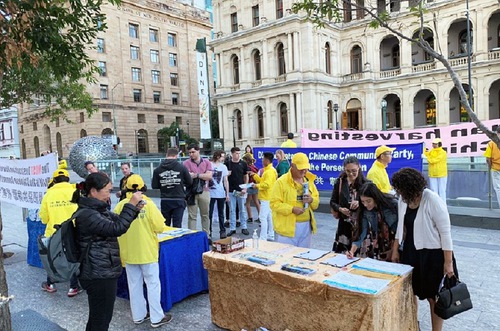 Practitioners hold activities on Brisbane Square on July 18, 2020, to make 21 years of the persecution of Falun Gong.

Detained and Tortured for Refusing to Give Up Falun Gong 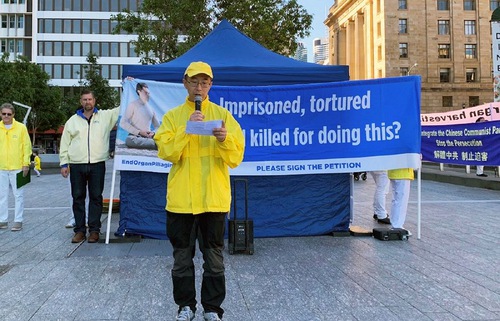 Meng Jun, former Tsinghua University professor, speaks at the rally about being imprisoned in China for 10 years for his belief.

Meng Jun, a former professor at Tsinghua University in China, began to practice Falun Gong in 1996. A classmate had told him about it, and Meng Jun found that the practice brought him physical and mental wellbeing. He was arrested at the end of 2000 and sentenced to 10 years in prison for refusing to give up his faith. He was forced to do slave labor and was constantly monitored by the criminal inmates. In 2005, he was forced to submit to a medical exam, and samples of his blood were taken. He said only Falun Gong practitioners in the prison were examined. “Thinking back, I seriously suspect this was for purposes of organ harvesting,” he said.

He arrived in Australia in 2012 on a student visa. He continued his studies at Queensland University and earned his Ph.D. with distinction. He currently works as a senior software engineer.

He said at the rally, “This 21-year-long persecution must end. The CCP is not only persecuting its citizens, it is a menace to everyone in the world as evidenced by its cover-up of the Wuhan virus that led to a global pandemic. Let’s come together and stop this suppression.” 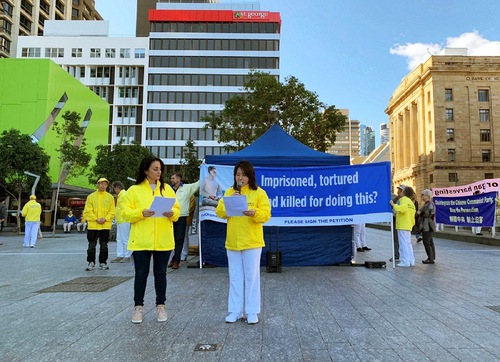 Annie Zhao (right) was persecuted in China for refusing to give up practicing Falun Dafa. She spoke about her ordeal.

Annie from Beijing recounted being persecuted in China. After she began to practice in January 1999, her health improved tremendously. She used to suffer from cold legs and this went away after she took up the practice.

After the CCP started to persecute the spiritual discipline, she went to Tiananmen Square six times to appeal. The police beat her brutally. She was sentenced to prison once and was later sent to a forced labor camp. Her son was only eight years old at the time.

“I was shackled to a bed 20 hours a day for nearly two months. The guards let mosquitoes in to bite me. Blood samples were frequently taken during the force-feeding sessions. I was also shocked with electric batons and had to do manual labor for up to 14 hours a day. I was not allowed to sleep at night,” she said.

Annie said that Falun Gong practitioners in China are still being tortured and killed for their organs. She hopes more people with a sense of justice will step forward and do something to stop these atrocities. 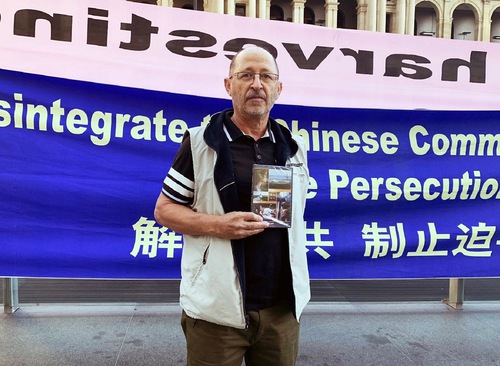 Raymond Tabone, a senior loan consultant, has been following China’s human rights situation for quite some time.

“You have done a great job. I hope you succeed. I want to help you. Many people still don’t know what’s happening in China today. We heard Scott Morrison criticising the communist regime lately, but I think the Australian Government should have done this 20 years ago. People only saw clearly what the CCP wants to do after the coronavirus outbreak. The Chinese government wants to turn the whole world into a communist party. How can we let this happen? We are a democratic country. Like America and England, we share the same beliefs,” he said.

He also spoke about China's organ harvesting from prisoners of conscience. “I have been watching a program called “China Focus.” There was a hidden camera and a conversation with a doctor in one episode. He said there were several kidney organs to choose from. Normally, you would be put on a waiting list to have your kidneys replaced. I cannot believe such a terrible thing is still happening in the world today.”

Raymond also said he has never thought Chinese people are bad. It is simply that the CCP is oppressing its people. “Look at the floods in China now. The regime has done nothing about it,” he said. 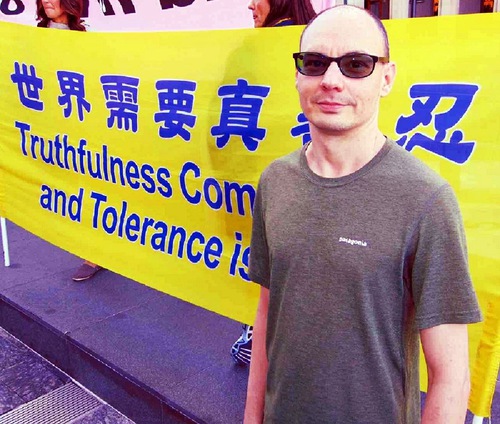 Jason Kargos, an IT expert who works in Brisbane, has a lot of respect for practitioners peacefully resisting the persecution.

“It is of utmost importance that this persecution end. This has gone on for 21 years, especially the taking of organs and selling them for a profit. It is shocking. The EU, United Nations, and more governments should pay attention to this important issue. People need to know the truth. Some countries have now seen clearly the CCP for what it is and are taking actions to reject communism,” he said. 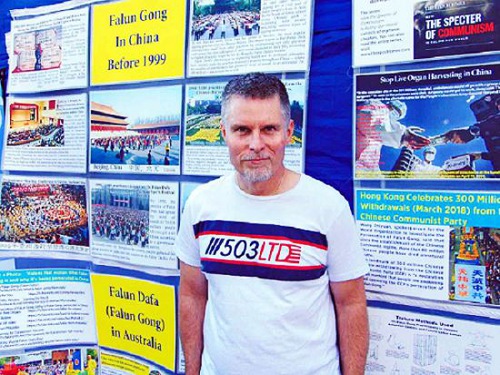 Mr. Wood, a construction manager, lives in the Brisbane Bay area and has worked in Hong Kong. When he learned that the CCP has arrested and tortured so many Falun Gong practitioners, he said, “I absolutely believe this is true. From what’s happening in Hong Kong, from the Wuhan virus, all these incidents show just how evil the CCP is. I have many friends in Hong Kong. The regime ruthlessly suppressed Hong Kong residents just because of peaceful protests. I support Falun Gong in resisting the persecution 100 percent.” 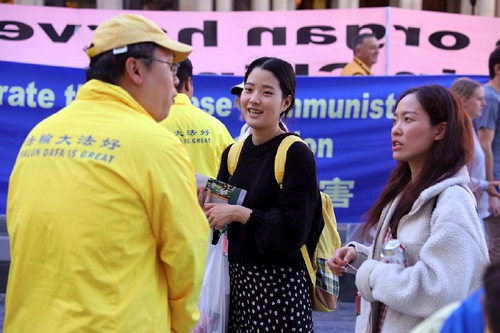 Students from Korea Ms. Pu and Ms. Jin were shocked to learn about the brutal persecution of practitioners in China.

Ms. Pu and Ms. Jin, students from Seoul, said they knew a little about Falun Gong from what they had learned back in Korea. They found a practitioner who could speak Korean at the rally and learned more about the persecution. They were horrorified by what they heard and promptly signed the petition condemning the persecution. 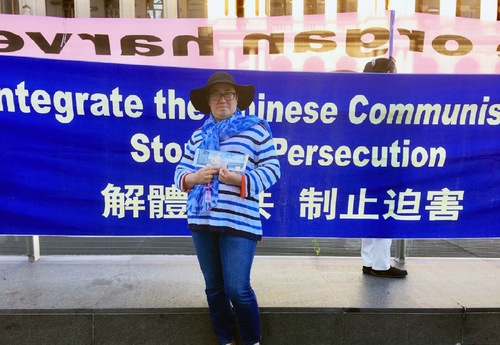 Georgina calls on the Australian Government to help end the persecution. 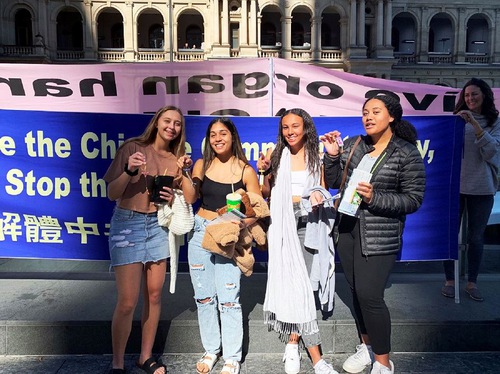 A group photo in front of a banner calling for an end to the persecution. The women are holding paper lotus flowers with messages on them about Falun Dafa. They signed the petition to show their support after learning about the persecution. 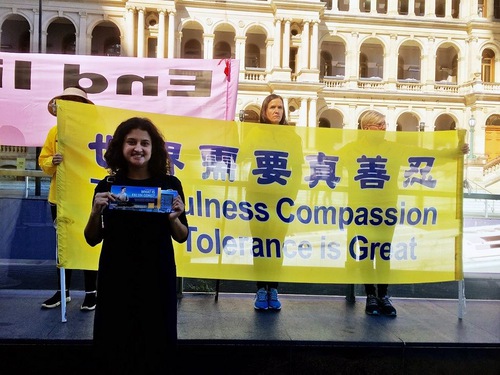 Kaiti Sharma was very sympathetic towards Falun Gong practitioners after learning about the persecution in China. She signed the petition to call for an end to the atrocities.

Xiao Hui (alias), a tourist from China who has stayed on in Australia due to the Wuhan virus, stopped to read the information boards. A practitioner explained to her that what she had heard about the practice in China were lies fabricated by the CCP to demonize practitioners and justify the persecution. She expressed her sympathy for the plight of practitioners in China.

Xiao Hui asked why the message on the banner called the coronavirus the “CCP virus.” She was afraid this would make Westerners discriminate against Chinese people. The practitioner explained that the virus started in Wuhan, China. The regime covered up the severity of the situation because of its corruption and disregard for human life. That allowed the virus to spread worldwide. Calling it the CCP virus, in fact, creates a distinction between the Chinese people, the Chinese outside of China, and the CCP. It also prevents racial discrimination, because Chinese people are victims of the virus, too. Xiao Hui agreed and decided to renounce her membership in the Communist Youth League. She also took several information leaflets to read.

Several Chinese passed by the rally that day and asked about the persecution. Some decided to sever their ties with the regime by renouncing their memberships in the CCP and its affiliated youth organizations. A few were surprised to see that so many Westerners had taken up the practice and they then expressed interest in learning Falun Gong, too.