(Minghui.org) During the past month, the Australian government relaxed restrictions on public activities and Falun Gong practitioners started collecting signatures calling for an end to the Chinese Communist Party’s (CCP) persecution. Their petition received great support from the public.

Since the persecution was launched on July 20, 1999, the verified number of deaths of Falun Gong practitioners due to the persecution has reached 4543 cases. According to the Minghui website, 5312 practitioners were arrested in China and 39 were killed in the first half of 2020 alone. However, these numbers only represent a fraction of the actual numbers due to the CCP’s censorship.

The Australian people condemned the CCP’s atrocities and called for the Australian Government to work with other governments around world to stop the CCP’s crimes. 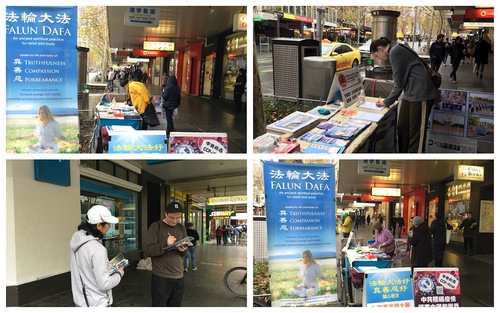 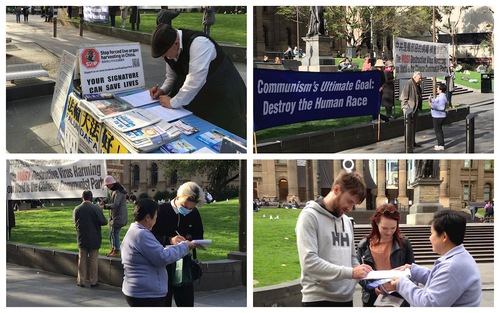 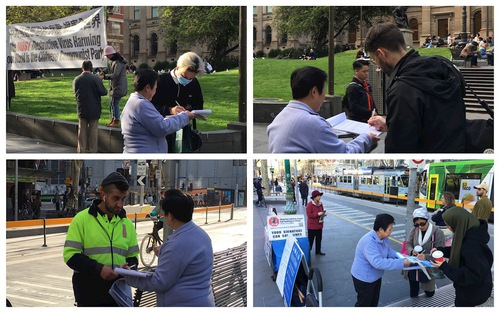 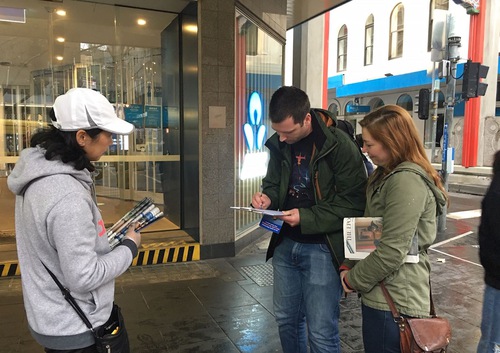 Ryna and her husband sign the petition in Melbourne’s Chinatown

Ryna, a college professor, and her husband were saddened by the persecution. Ryna said the 21-year-long persecution was completely unacceptable. She knew that Falun Gong was a peaceful belief and the CCP’s propaganda was illogical.

“Truthfulness, Compassion and Forbearance are universal values and great moral principles. I think the Chinese people have been completely misled by the propaganda,” she said.

Ryna’s husband said he has told his family and friends about the persecution of Falun Gong in China. The couple said they would like to see the Australian Government openly put pressure on China to end the persecution. They said the public and international society should pressure China together. 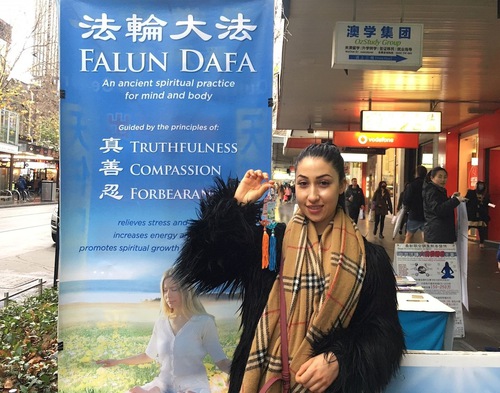 Lola, a college student studying psychology, signed the petition and said that she couldn’t believe such cruel persecution and organ harvesting were still going on.

“It’s obvious that the persecution should stop. All countries should work together to stop it. It’s absolutely the right thing to do,” she said. 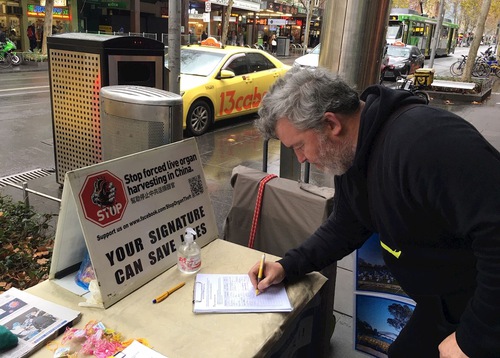 Mathew, a middle school teacher, and his daughter Hannah signed the petition. Hannah said that everyone should be able to enjoy freedom of belief, because this is a basic human right. Mathew said that Australians need to decide what is more important: human rights or money? He said that human rights were the foundation of Australia and people's actions should follow their words. 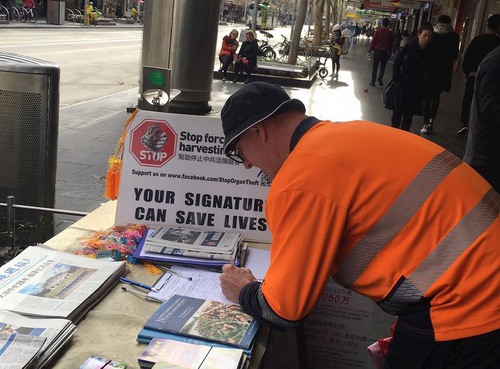 Grant, a local resident, says organ harvesting is a crime against humanity, and the Australian Government and people should unite against the CCP. 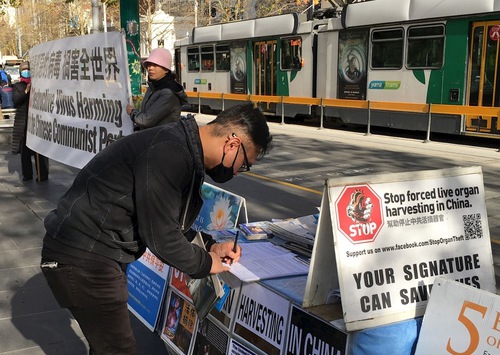 Francis, an IT professional, had watched documentaries about the persecution of Falun Gong. He said he admired Falun Gong practitioners for what they have done.

“The Communist Party has a completely different ideology from the free world. They use the world’s resources for their own benefit and don’t consider the consequences. It’s very dangerous. People should reject it,” he said. 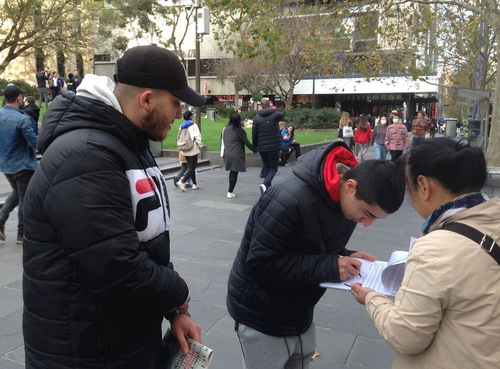 Zard, a high school student, and his friend sign the petition.

High school student Zard and his friends planned to help spread information about the persecution of Falun Gong on social media.

“I have done some research on the Chinese Communist Party. I found that it has persecuted not only a large number of people of its country, but also many religious groups. Falun Gong is speaking for everyone and spreading powerful and great messages,” Zard said. 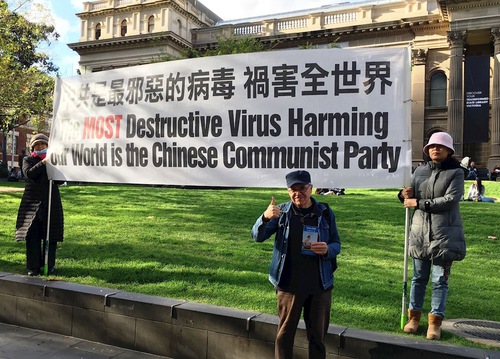 Kevin, a retired local resident, said he loved reading and was fascinated by Chinese culture. He said the Cultural Revolution in China had brought a huge disaster upon the traditional culture. He was shocked to learn that the CCP had killed more Chinese people than the Japanese invasion during WWII.

Kevin has been paying attention to the persecution of Falun Gong since the very beginning. He said the legal system in China offered no protection of human rights, like forced land seizures, forced demolitions, and the persecution of Falun Gong and especially the forced organ harvesting was cruelty beyond imagination. He praised Falun Gong’s peaceful resistance and the work to awaken the public by spreading the truth.

“Truthfulness-Compassion-Forbearance are universal values. There is absolutely nothing wrong following these principles. If everyone could follow those principles, policemen and security guards would have easier jobs,” Kevin concluded. 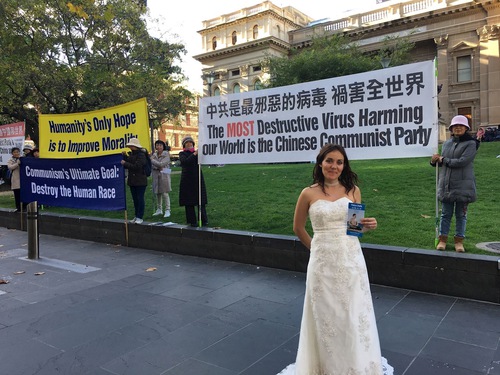 Angela, a bride taking her wedding photos in front of the state library, shows great concern over the persecution of Falun Gong. 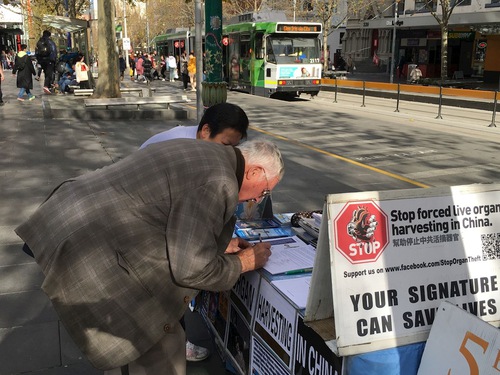 John, another local resident, said he had been observing the situation in China for many years and knew that the Chinese Communist Party had tried to control the world. He condemned its infringement on freedom in Hong Kong and praised Falun Gong’s principles as “right on the dot.” He encouraged practitioners to keep up their great work for human rights.