(Minghui.org) “July 20, 1999 is an unforgettable day. It was the day Falun Gong was wronged, the day the Chinese Communist Party was added to the column of shame,” said Li Li-lian during a rally held by Falun Gong practitioners near the Chinese Embassy in Ottawa on July 17.

Li, who had been tortured by the communist regime for her belief in Falun Dafa, added that thousands of Falun Gong practitioners died as a result of the brutal persecution. Some of them even had their vital organs harvested by the government sanctioned program to sell to transplant patients. “This ridiculous persecution was initiated because Falun Gong practitioners want to practice their belief in Truthfulness-Compassion-Forbearance, mankind's universal values.” 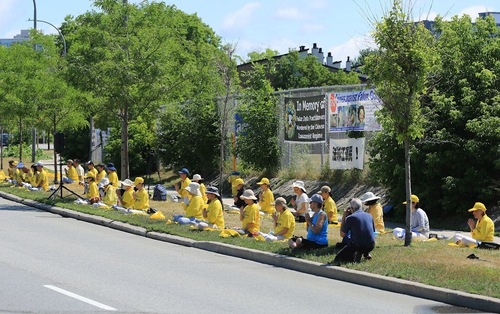 Falun Gong practitioners in Ottawa held a peaceful protest in front of the Chinese Embassy on July 17, 2020.

During the rally, three practitioners described their experiences of being persecuted in China, including Li Li-lian, William Wang and Jenny Wang. 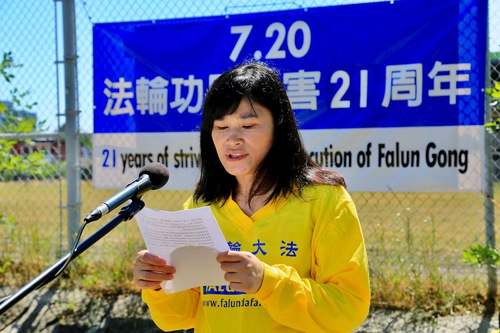 Li Li-lian speaks at a rally in front of the Chinese Embassy in Ottawa held on July 17, 2020 to raise awareness of the 21-year-long persecution of Falun Gong.

Li was arrested and jailed twice in China. Local authorities and the 610 Office ransacked her house twice and confiscated her personal belongings. She was tortured and had her blood samples forcefully taken multiple times while she was imprisoned. 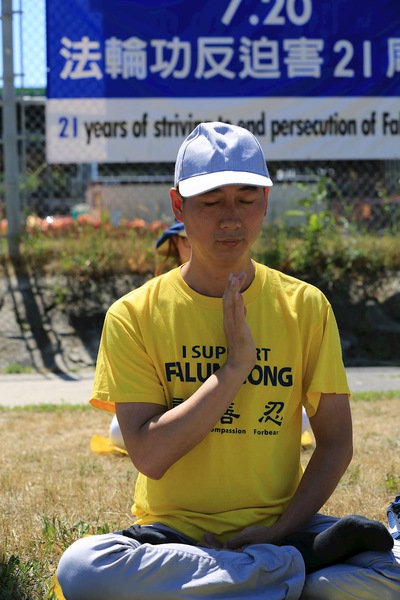 William Wang, worked as an airplane design engineer in China.

William Wang, an airplane design engineer in China, had similar experiences. The authorities collected his blood samples many times while he was imprisoned in a detention center.

“I read in the media that many other practitioners had the same experiences I did,” he said. According to an investigative report by senior human rights lawyer David Matas, and David Kilgour, the CCP collected blood samples from Falun Gong practitioners to match transplant patients.

Jenny Wang, a teacher who was highly respected by her colleagues and school leaders, was dismissed from her job after she appealed for Falun Gong in Beijing in January 2000. The CCP pressured her both financially and mentally to force her to give up her spiritual belief, Falun Gong.

While she was detained in Beijing she also witnessed policemen beat up and torture a practitioner who was over 80 years old. “A policeman fiercely whipped him with a belt and then made him stand outside in the freezing cold for hours. He was dressed in thin clothes and his hands were cuffed behind his back,” Jenny recalled.

“Falun Gong will not succumb to violence. As long as the Chinese Communist Party continues the persecution, we will not stop telling the world the facts of the brutality. Evil can never defeat justice,” Li Li-lian said.

William Wang said in his speech that in history, no persecution of righteous belief has ever succeeded. After the Romans persecuted the Christians the empire suffered four plagues until they repented to God and ended the persecution.

In her speech, Jenny Wang said, “Our determination to practice Falun Gong won’t change. Our belief in Truthfulness-Compassion-Forbearance cannot be destroyed.” 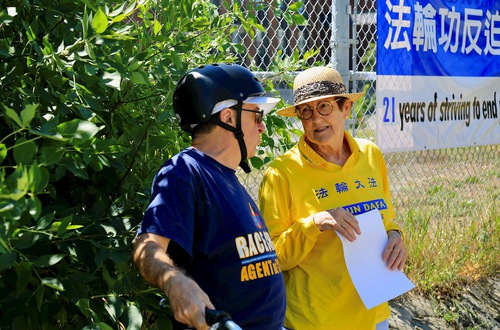 Roger B, a federal government retiree, said the persecution is not acceptable.

Many passing drivers honked their horns to show their support for the rally. Roger B, a federal government retiree, said he learned about the persecution twenty years ago and that it is not acceptable.

He said, “The Chinese Communist Party won’t tolerate any differing voice, no matter how tiny it is. In Canada we already see this. The communist regime must be condemned. I wish our prime minister would step up to oppose the regime. Unfortunately, many elites in our country have surrendered to the communist regime.”

According to Dai Gong-yu of Falun Dafa Association in Canada, more than 60 Members of Parliament have signed a bill supporting Falun Gong and condemning the persecution in China.