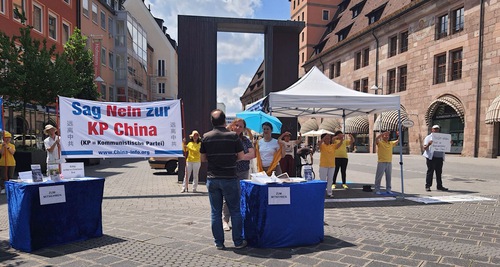 Nuremberg is the place where tribunals were held after World War II against prominent leaders of Nazi Germany for their roles in the Holocaust and other war crimes.

Practitioners held up banners which stated, “Stop Persecution of Falun Gong” and “Say No to the CCP” on Hallplatz. They demonstrated the five sets of exercises and told people about Falun Gong. Many passersby stopped to watch the exercise demonstration, talked with practitioners, and signed a petition calling for an end to the persecution.

A young man named Nova had a long discussion with a practitioner, Ursula. Nova said that he was a Marxist. Ursula asked him about Marxism and why he believed in it. Nova couldn’t explain but said he simply wished all people could live well. Ursula told him that millions of people died due to the Communist Party's various persecutions over the decades and many crimes were committed under the name of Communism. Ursula suggested another way to help people: If people could value morality and follow the principles of Truthfulness-Compassion-Forbearance, they would enjoy good lives like Nova wanted.

Nova smiled and said, “Yes, this is what I want!” He took information about Falun Gong and thanked Ursula. His face radiated with excitement. 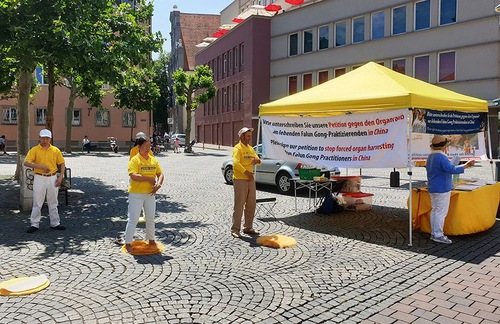 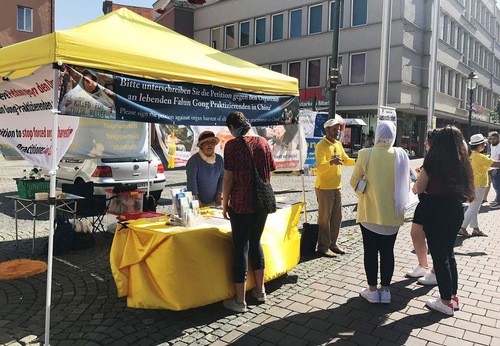 Practitioners in Augsburg set up a booth on Moritzplatz. Because of the global impact of the pandemic, many people are concerned about the situation in China. They know that the CCP covered up the true situation in China, so now people wonder what is really happening there.

A continuous stream of people signed the petition. One young woman told a practitioner that she had gone to college in China and one of her classmates was imprisoned for practicing Falun Gong. She knew about the persecution and hopes the practitioner’s family in China is safe.

A middle-aged woman was appalled by the CCP’s atrocity of harvesting organs from living Falun Gong practitioners. She said, “What have our politicians done about it? They should take action to stop it!”

Another woman said that a Chinese doctor she knew had told her the number of organ transplants in China was much bigger than the officially reported number. She quickly signed the petition. 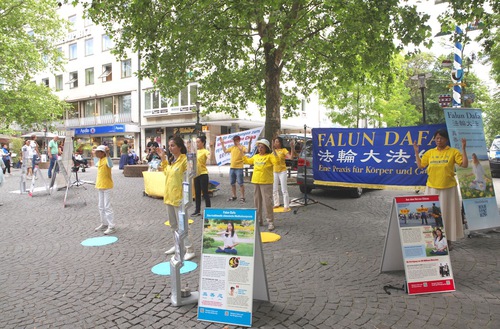 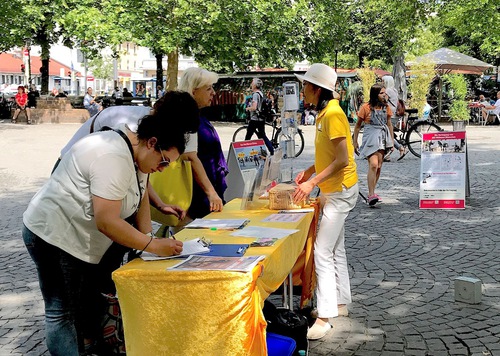 As soon as practitioners started setting up their booth on Rotkreuzplatz in Munich, people approached them to sign the petition. A woman said one of her friends had a Chinese wife, whose father died from the CCP’s persecution. She said, “It’s ridiculous for Germany to do business with the Chinese Communist Party! The regime has no respect for human rights!” She took some introductory flyers for her friend.

Anne Spory, a local resident, stated her reason for signing the petition, “I know many unimaginable and unfair things happen in China. People of faith are persecuted and deprived of their freedom. The simple way to treat totalitarianism is to not do business with them. Falun Gong represents positive values. It’s trying to improve the lives of all people on the Earth.” She thought the CCP’s persecution of people following Truthfulness-Compassion-Forbearance was due to the CCP’s ideology.

Lothar, a nine-year-old, asked practitioners for detailed information. She signed the petition with her parents’ permission. She said, “I hope the Chinese people will see that I think this persecution is wrong. I hope the persecuted people will have the freedom to express themselves. Truthfulness-Compassion-Forbearance is important.”

Gabi, who came with Lothar, also signed the petition. She said, “I asked myself, ‘If you know it [organ harvesting], why don’t you stand up to oppose it?’ I want to be part of the group opposing it. It’s against human nature to persecute people who are just following Truthfulness-Compassion-Forbearance.”