Ottawa Artist: Stories Behind the Paintings

(Minghui.org) Kathleen Gillis decided to participate in the National Arts Drive held on June 20, 2020. The event was held by the RAW arts organization to allow people in Ottawa to enjoy arts outdoors during the coronavirus pandemic. Ms. Gillis displayed four paintings in her front yard so that her neighbors and friends could see them. Through her artwork, they learned about her belief, Falun Dafa, and the persecution of this meditation practice taking place in China. 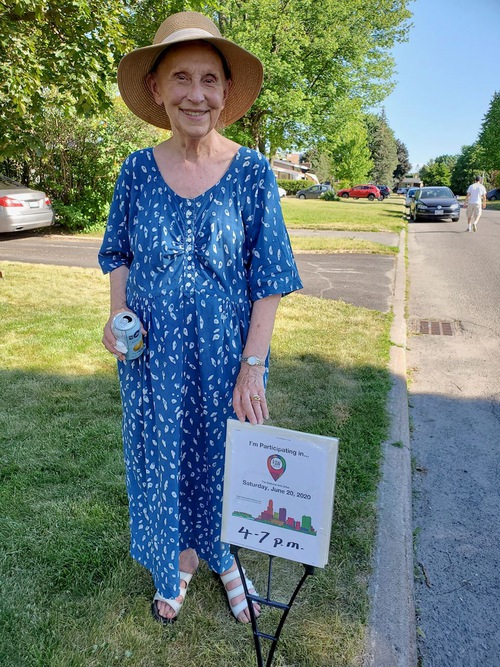 Kathleen Gillis, a painter in Ottawa, Canada, displays her paintings on June 20, 2020.

Ms. Gillis finished the painting titled “Liu Chengjun” in 2003, depicting a Falun Dafa practitioner’s suffering. Mr. Liu tapped into TV signals and broadcast a video about the Chinese Communist Party’s persecution of Falun Dafa in 1999. He was later arrested and tortured to death. (Editor’s note: Some practitioners in China used this method to tell people about the persecution because they were denied all legal channels of appeal.) Ms. Gillis says the painting shows that tribulations are only temporary while noble belief and firm hope are eternal.

Practitioners often peacefully protest in front of the Chinese Consulates around the world to demand the CCP stop the persecution. Ms. Gillis and other practitioners went to the Chinese Consulate in Ottawa every Wednesday. She added these details into her painting “Observer-Participant.” The work also shows Gods from the East and the West to symbolize that Falun Dafa is practiced around the world. 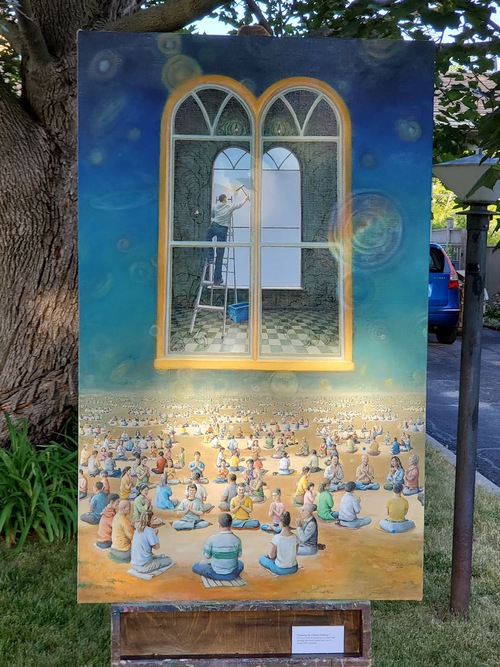 Another work, “Cleaning the Chinese Consulate,” was only partly finished. The painting shows practitioners meditating at the bottom with two windows at the top. One window looks into the Chinese consulate, and the other sees the sky. A practitioner standing on a ladder is cleaning the window so that people inside the consulate can see the blue sky outside.

The art drive lasted a few hours, and many families strolling the neighborhood stopped to view the paintings. They praised the quality, detail, and peaceful messages the art conveyed.

Ms. Gillis wanted to be an artist since she was little and began her career after college. “In the 30 years I was in education and art, I was lucky to become a Falun Dafa practitioner. It is an important milestone, and I have the responsibility to tell the truth to people.”

“After I began practicing Falun Dafa, my thoughts and my creations became clear. My work has more depth, and the purpose for my creation is obvious.”

Ms. Gillis sees it as her responsibility to precisely record the actions of Falun Dafa practitioners, what the CCP did during the persecution, and what the practitioners did to end it. “I'm fortunate to be part of this special period of history. How can I not record all of this as an artist?” she said.