(Minghui.org) The province of Qinghai, in western China, adjacent to Tibet and Xinjiang, is known as the origin of both the Yangtze River and the Yellow Province. Like other provinces in China, Qinghai has also been persecuting Falun Gong practitioners since the Chinese Communist Party launched a nationwide campaign against the practice in July 1999.

According to recent information received by the Minghui website, Mr. Tang Fabang, an English teacher in Xining, the capital of Qinghai, died at Menyuan Prison between 2010 and 2015. Mr. Tang had been imprisoned for refusing to renounce his faith in Falun Gong.

When practitioner Mr. Wu (alias) was being held at the Minhe Detention Center in May 2014, officer Chen Jie, while attempting to threaten Mr. Wu, revealed how Mr. Tang had been mistreated at the detention center.

When practitioner Mr. Gu (alias) was sent to Dongchuan Prison in September 2015, an officer said to him, “Tang Fabang already died in Menhyuan Prison. If you don’t give up [your belief], you will die here, too!”

Mr. Tang was not the only practitioner in Xining who died as a result of the persecution of Falun Gong.

Ms. Fan Lihong, 27, died in January 2002 after being committed to a mental hospital multiple times for refusing to renounce Falun Gong.Ms. Tan Yingchun died in a labor camp on December 29, 2002, at the age of 46.Ms. Zhang Xuefeng died on November 20, 2003, less than one year after being released from a labor camp.Mr. He Wanjie died on May 28, 2003, while serving 17 years in Menyuan Prison, and his wife Ms. Zhao Xiangzhong died on February 22, 2004, shortly after she was released.Mr. Ping Chunfeng died in 2005 after being drugged in a labor camp and becoming mentally disoriented.Ms. Huang Fengying, 65, died in 2006 after repeated harassments by authorities.Mr. Wei Haiming died in July 2012, shortly after serving five years in prison.Mr. Zhang Youzhen, a practitioner in Huzhu County, Qinghai Province, was also confirmed to have died on June 19, 2003, after being tortured in detention.

Mr. Tang was an English teacher at Lejiawan Elementary School. He went to Beijing to appeal for Falun Gong after the suppression started in 1999. He lost his job as a result of his appeal.

His first labor camp term at Duoba Forced Labor Camp expired in February 2001. Because he refused to renounce his belief, Mr. Tang’s term was extended. Mr. Tang was handcuffed behind his back, along with another practitioner, Li Shengxi, by officer Lu Xin. The two of them were forced to jog under the burning sun for a long time, followed by solitary confinement. Seven days later, Mr. Tang was in a life-threatening condition and returned to a regular cell.

After being released from the labor camp on December 16, 2001, Mr. Tang was arrested again for his faith on December 28 that year and sent to the same labor camp after the New Year. The guards beat him and shocked him with several 100,000-volt electric batons for two hours. He was then handcuffed behind his back and put in solitary confinement for seven days. To protest the mistreatment, he started a hunger strike in April 2002. He was in a life-threatening condition multiple times during those two years at the labor camp due to the torture. 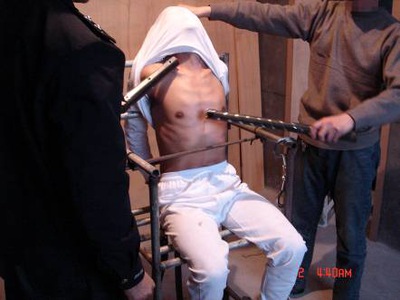 Because the 610 Office agents harassed his employer and relatives many times, the health of his parents deteriorated. His wife could not work normally and his son was discriminated against.

Upon his release, Mr. Tang was forced to stay away from home to avoid being harassed. When he did return home to see his wife and child, he was arrested by agents from the Xining Domestic Security Division and Pengjiazai Police Station. He was tied up on a tiger bench torture device with all four limbs immobilized while being interrogated at the Xining Domestic Security Bureau. The police took turns watching him and did not allow him to sleep. Three days later, however, Mr. Tang was able to escape the facility.

Officers from Xining Domestic Security Bureau arrested Mr. Tang again on September 8, 2009. They took him to Ershilipu Detention Center and filed his case with the court.

He was sent to Menyuan Prison in 2010 and placed in the First Ward. He refused to renounce his faith and was kept in solitary confinement for several months. He went on a huger strike in protest and was force-fed.

The guards played audio recordings that slandered Falun Gong on a loudspeaker, which stressed Mr. Tang, whose health was declining. He eventually had organ failure and died at Qinghai Red Cross Hospital. When, exactly, Mr. Tang died remains to be investigated.

Several officers were responsible for persecuting Mr. Tang, including Guo, deputy political director of the First Ward in the prison, and Chen Jie, director of the psychology department at Golmud Drug Rehabilitation Center (a brainwashing center formerly known as Golmud Labor Camp). Chen was involved in brainwashing of many practitioners in Qinghai and participated in Mr. Tang’s arrest.

Entrepreneur Passes Away Shortly After Five Years of Imprisonment