(Minghui.org) Dr. Lun-Hsiang Yuan at the National Taiwan University Hospital Yunlin Branch graduated from medical school when he was 25. He is a young expert of tumor surgery and the Da Vinci Robot Surgical System. Years of tenacious work has tempered him into a surgeon with superb skills. However, Dr. Yuan always felt that he was waiting for a teacher who would lead him to a higher and more profound spiritual realm.

Dr. Yuan said, “I felt that the knowledge and skill I attained during my entire medical career couldn’t help me clear up my confusions in life. There always seemed to be something deeper I hadn’t come across.”

Given Dr. Zheng’s recommendation, Dr. Yuan started reading Zhuan Falun as well. Since that day, he has not stopped reading the book. “After reading it the first time, I realized that I had finally found my true teacher!” he said. He also read all the other publications by Master Li Hongzhi.

“I felt I was transported to another dimension while reading the books, as if my brain had been unlocked. The teachings answered all my questions thoroughly. I asked myself, ‘Who is able to explain the universe, human beings, and the history of the Earth so clearly? The author must be divine!’”

Greatly shaken by Falun Dafa, Dr. Yuan started treating himself as a cultivator.

“I had been regarded as a good surgeon, but soon after I started my cultivation, a patient died from complications after surgery. Even though the chance of survival was as low as 1 out of 10,000, it greatly disturbed me.” Dr. Yuan cried in his office. He felt extreme guilt and the same sadness as the patient’s family.

He had saved countless lives and always received praise and appreciation, but the patient’s death made him lose the courage to attempt another surgery. When it rains, it pours. His financial situation suddenly worsened. Conflicts arose at home and work. He faced dilemmas from every direction. However, Dr. Yuan didn’t forget that he was a Falun Dafa practitioner.

Soon afterwards, a new patient insisted that Dr. Yuan operate on his tumor. “I told him that a patient of mine had died and advised him to go to another hospital, but this patient completely trusted me and wouldn’t leave. It appeared as if it was arranged by Master.”

As he could not refuse, Dr. Yuan let go of his fear and decided to do the surgery. He said, “After I made the decision, I studied the Fa intensively and tried to eliminate my fear and attachments. The surgery turned out to be a great success! I knew I had passed this test. Everything started to go well from then on.” Recounting his experience, Dr. Yuan said he couldn’t have broken through without Master’s help. 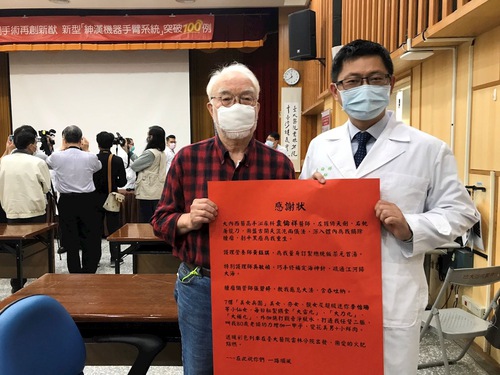 Dr. Yuan and his patient

Looking within after this tough test, Dr. Yuan said, “I used to be complacent. I only saw my skill and usually blamed anything I could think of if a surgery didn’t go well. After this terrible stumble, I realized a surgery relies on the cooperation of a whole team. The surgeon isn’t the only leading role. It requires everything to be done well.”

Dr. Yuan also drew inspiration from Shen Yun shows, when every dance movement and musical note worked together perfectly. He realized that the process of cultivation is letting go of attachments, following the Dafa principles without doubt, and embodying the extraordinary through the most ordinary.

With many urgent and stressful life-and-death situations at his job, Dr. Yuan said the Falun Dafa exercises allowed him to remain stable and calm. “I used the break before each operation to do some Falun Dafa exercises, which brought amazing results. Accidents stopped happening. The whole operation was carried out in a desirable direction. I could only hear the patients’ heartbeats and my own voice. It was a peaceful and pure atmosphere of righteous thoughts. The true meaning of peace dawned on me,” he said. 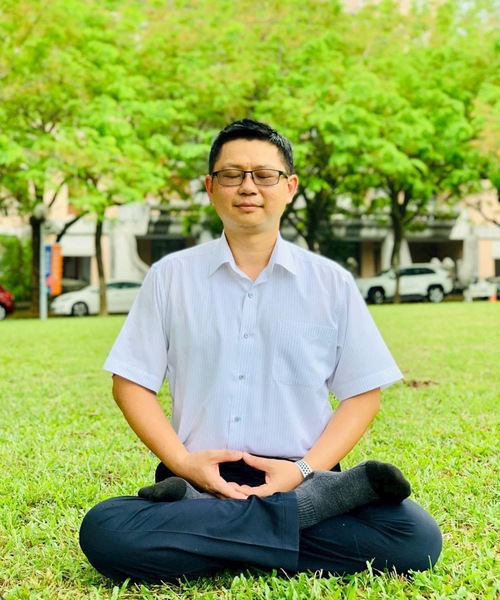 Dr. Yuan said that he had learned from Falun Dafa how to let go of attachments to himself and put himself in other people’s shoes. “Having studied Western medicine for years, I could quickly identify others’ shortcomings and answer any critique. It became my obstacle at work and in my family life.

“My character has improved by studying the Fa. I realized my goal isn’t winning indiscriminate applause but rather to become a cultivator in accordance with the qualities of the universe. So, when I notice something my team needs to improve on, I don’t ignore it for fear of offending someone. I point it out calmly and sincerely, and explain it from the perspective of patient safety and the overall situation.”

He continued, “The same principle applies to family life. I used to work hard in order to be called a good husband and father. After a busy day of work, I would rush back home to help my wife with housework.” Dr. Yuan said he realized the “difference between husband and wife” as described by ancient Chinese culture referred to the roles of the individual instead of their status.

His wife is a stay-at-home mother who raises their four boys, as her husband has a stable income. She was fully supportive of Dr. Yuan concentrating on his career. He was very appreciative of her support, which made it possible to continue his education in his spare time.

Dr. Yuan always keeps in mind that he is a Falun Dafa practitioner. Whether he runs into pleasant or unpleasant things, he always treats them as good opportunities to improve his character. As he passed tests and changed his view of life, he became happier and more outgoing.

There is a common saying in the medical field: “If you are a good surgeon, you are probably not very good at research. If you are good at research, you probably don’t have a good family life.” Dr. Yuan said, “I’m confident that I’m good at all of the above, because I cultivate in the righteous Way. Tempering myself according to Truthfulness-Compassion-Forbearance can only make me better, thanks to Master and Dafa!”

“938 Falun Gong Practitioners Targeted for Their Faith in May 2020”

“Jilin Woman in Her 80s Harassed for Her Faith, Son Faces Extortion by Police”