(Minghui.org) Some Falun Dafa practitioners from the Netherlands demonstrated outside the Chinese Embassy in the Hague on April 24, commemorating an event where more than 10,000 Falun Gong practitioners peacefully appealed for justice to the Beijing government on April 25, 1999.

Just as practitioners behaved in the event 21 years ago, those in the Netherlands had no slogans and remained quiet and peaceful. The practitioners unfurled banners imprinted with the words “Falun Dafa,” “The World needs Truthfulness-Compassion-Forbearance,” “Dissolve the Chinese Communist Party, End the Persecution” and one banner about the Chinese Communist Party (CCP) concealing vital information about the Wuhan coronavirus, which caused enormous harm to the rest of the world. 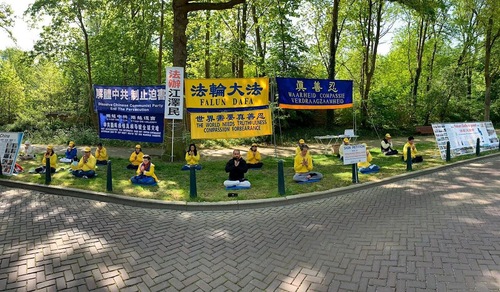 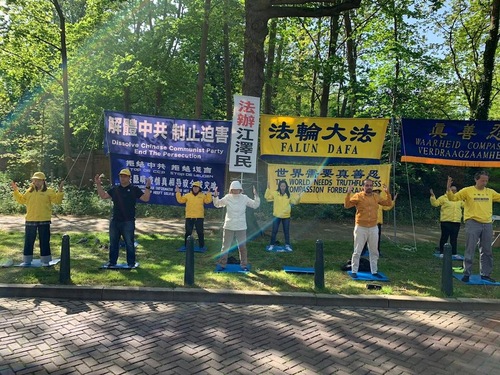 Practitioners perform the Dafa exercises outside the Chinese Embassy on April 24, 2020.

Because of the Wuhan coronavirus, many companies, schools and stores were closed in the Netherlands. However, the local government approved practitioners’ protest request with a limit on the number of attendees.

Ms. Feng has participated in the same protest in past years. She was among those who appealed in Beijing on April 25, 1999 and had fled China to the Netherlands 7 years ago.

Practitioner Gökhan Tunc came to the Netherlands when his parents emigrated from Turkey. He used to have a severe skin disease, but it was cured after he started practicing Falun Dafa. He participated in the protest to speak up for Falun Dafa and Chinese practitioners who couldn’t partake.

Falun Dafa practitioners in the Netherlands have organized many activities in Amsterdam, Rotterdam, and remote townships to raise awareness of the ongoing persecution in China. They aim to rectify the CCP's hate propaganda against Falun Dafa and to expose the brutality of the persecution, which has continued for the past 21 years. Thousands of locals have supported practitioners in opposing the persecution. 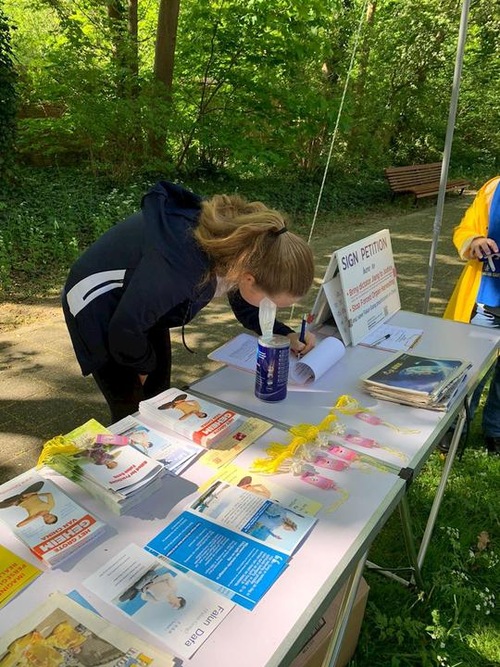 Signing a petition to bring former CCP leader Jiang Zemin to justice. Jiang launched the persecution of Falun Gong in 1999.

“A Fundamental Cure for the Pandemic”