(Minghui.org) May 13, 2020, was the 21st World Falun Dafa Day and the 28th anniversary of Falun Dafa's introduction to the public. To honor this special occasion, each year government officials issue proclamations and congratulatory letters. 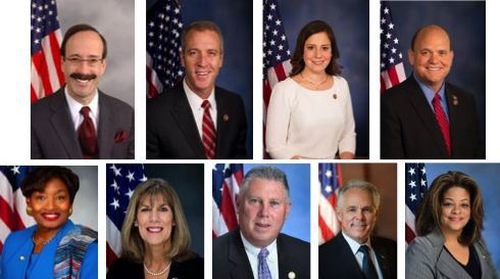 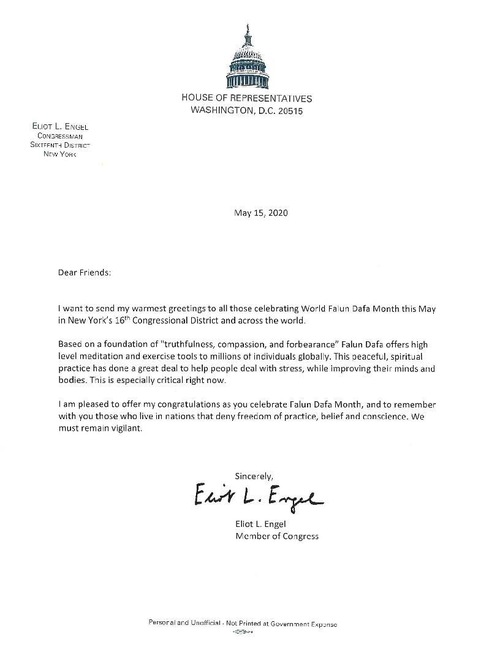 “I want to send my warmest greetings to all those celebrating World Falun Dafa Month this May in New York’s 16th Congressional District and across the world.” Representative Eliot L. Engel stated in his letter.

“Based on a foundation of “Truthfulness, compassion, and forbearance” Falun Dafa offers high level meditation and exercises tools to millions of individuals globally. This peaceful, spiritual practice has done a great deal to help people deal with stress, while improving their minds and bodies. This is especially critical right now.” 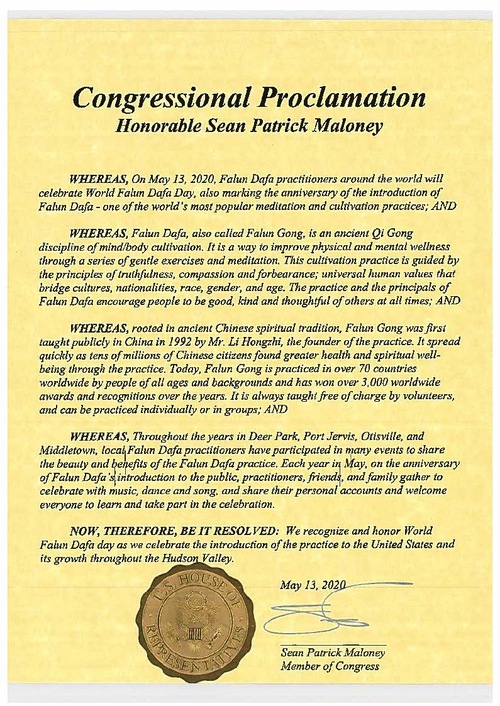 “Falun Dafa, also called Falun Gong, is an ancient Qi Gong discipline of mind/body cultivation,” the proclamation reads, “It is a way to improve physical and mental wellness thorough a series of gentle exercises and meditation. This cultivation practice is guided by the principles of truthfulness, compassion and forbearance; universal human values that bridge cultures, nationalities, race, gender, and age. The practice and the principles of Falun Dafa encourage people to be good, kind and thoughtful of others at all times.”

“Throughout the years in Deer Park, Port Jervis, Ottsville, and Middletown, local Falun Dafa practitioners have participated in many events to share the beauty and benefits of the Falun Dafa practice. Each year in May, on the anniversary of Falun Dafa’s introduction to the public, practitioners, friends, and family gather to celebrate with music, dance and song, and share their personal accounts and welcome everyone to learn and take part in the celebration.” 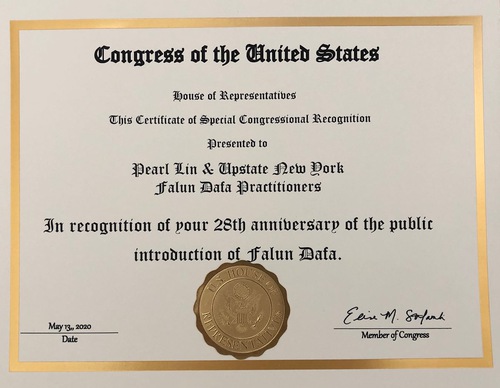 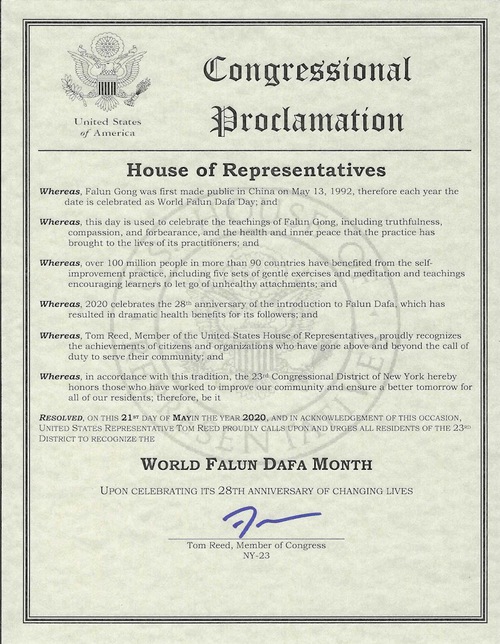 “Falun Dafa was first made public in China on May 13, 1992, therefore each year the date is celebrated as World Falun Dafa Day,” the proclamation reads.

“This day is used to celebrate the teaching of Falun Gong, including truthfulness, compassion, and forbearance, and the health and inner peace that the practice has brought to the lives of its practitioners.”

“Over 100 million people in more than 90 countries have benefited from the self-improvement practice, including five sets of gentle exercises and meditation and teaching encouraging learners to let go of unhealthy attachments.”

“2020 celebrates the 28th anniversary of the introduction to Falun Dafa, which has resulted in dramatic health benefits for its followers.” 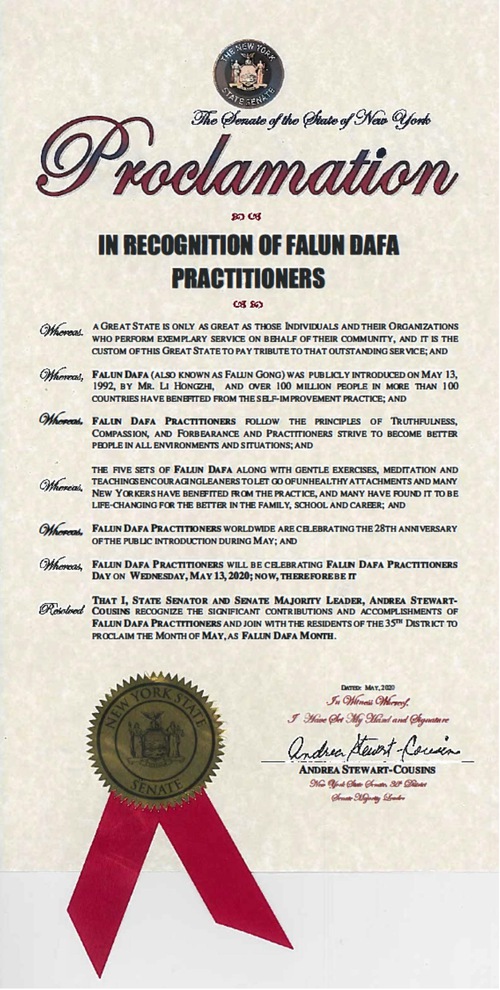 “A great state is only as great as those individuals and their organizations who perform exemplary service on behalf of their community, and it is the custom of this great state to pay tribute to that outstanding service,” the proclamation from New York Senator and Senate Majority Leader Andrea Stewart-Cousins reads.

“Falun Dafa (also known as Falun Gong) was publicly introduced on May 13, 1992, by Mr. Li Hongzhi, and over 100 million people in more than 100 countries have benefited from the self-improvement practice.”

“Falun Dafa practitioners follow the principles of truthfulness, compassion, and forbearance and practitioners strive to become better people in all environments and situations.”

“The five sets of Falun Dafa along with gentle exercises, meditation and teachings encourage learners to let go of unhealthy attachments and many New Yorkers have benefited from the practice, and many have found it to be life-changing for the better in the family, school and career.”

“Falun Dafa practitioners worldwide are celebrating the 28th anniversary of the public introduction during May.” 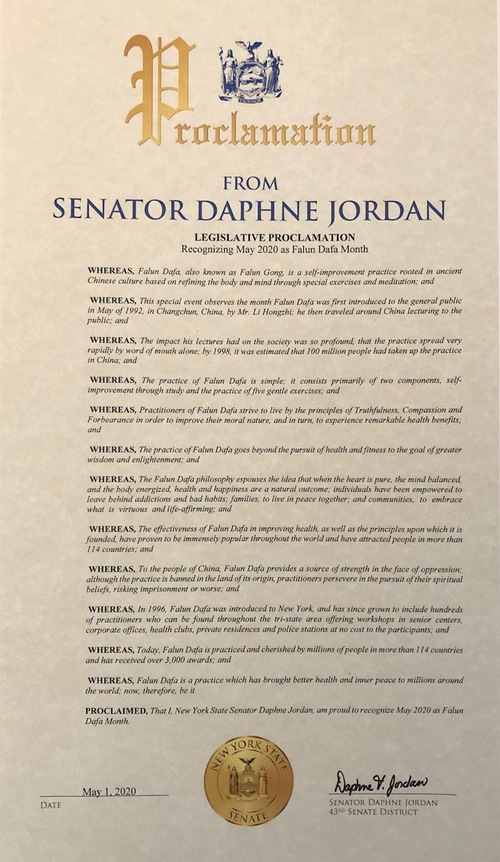 “This special event observes the month of Falun Dafa, which was first introduced to the general public in May of 1992, in Changchun, China, by Mr. Li Hongzhi; he then traveled around China lecturing to the public,” the proclamation from New York Senator Daphne Jordan reads.

“The impact his lectures had on the society was so profound, that the practice spread very rapidly by word of mouth alone; by 1998, it was estimated that 100 million people had taken up the practice in China.”

“The practice of Falun Dafa is simple; it consists primarily of two components, self-improvement through study and the practice of five gentle exercises.”

“Practitioners of Falun Dafa strive to live by the principles of Truthfulness, Compassion and Forbearance in order to improve their moral nature, and in turn, to experience remarkable health benefits.”

“The Falun Dafa philosophy espouses the idea that when the heart is pure, the mind balanced, and the body energized, health and happiness are a natural outcome; individuals have been empowered to leave behind addictions and bad habits; families, to live in peace together; and communities, to embrace what is virtuous and life-affirming.”

“To the people of China, Falun Dafa provides a source of strength in the face of oppression; although the practice is a banned in the land of its origin, practitioners persevere in the pursuit of their spiritual beliefs, risking imprisonment or worse.”

“In 1996, Falun Dafa was introduced to New York, and has since grown to include hundreds of practitioners who can be found throughout the tri-state area offering workshops in senior centers, corporate offices, health clubs, private residences and police stations at no cost to the participants.” 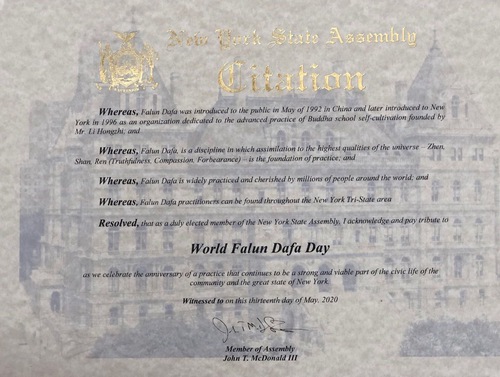 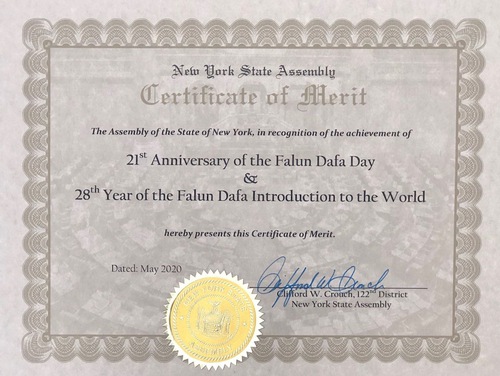 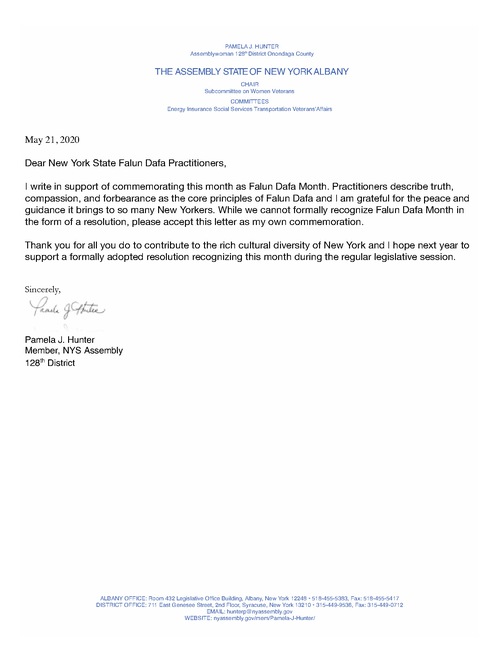 Letter from New York Member of Assembly Pamela J. Hunter in support of annually commemorating May as Falun Dafa Month.

“Thank you for all you do to contribute to the rich cultural diversity of New York and I hope next year to support a formally adopted resolution recognizing this month during the regular legislative session,” Ms. Hunter wrote.