(Minghui.org) Over 500 young Falun Dafa practitioners from more than twenty countries held an online conference on May 23, 2020. They exchanged their stories on how they improved by following Falun Dafa's principles as a guide in their lives. Eighteen practitioners spoke and shared their life-changing experiences in four languages, including Chinese, English, Spanish, and Vietnamese. The speakers were from the U.S., Australia, Canada, Taiwan, Latvia, Argentina, and Vietnam. 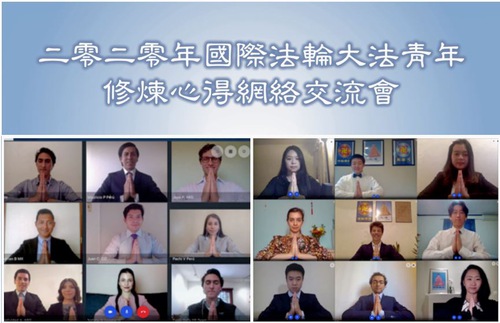 Over 500 young Falun Dafa practitioners from more than twenty countries shared their cultivation experiences during an online meeting held on May 23, 2020.

The conference connected young practitioners around the world during the CCP virus (coronavirus) pandemic, and they encouraged one another to cultivate more diligently. 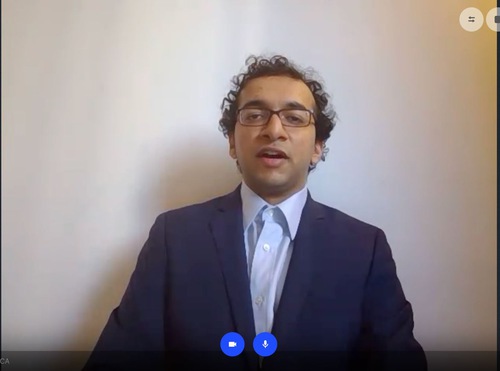 Prashant from Canada said he learned Chinese in order to study Zhuan Falun in the Chinese language.

Prashant grew up in India and is a graduate student in Canada. He said he was motivated to learn Chinese because he wanted to read Master Li’s teachings in the language Master taught them in. By using online software he was able to translate each word in Zhuan Falun and at the same time, he learned Chinese.

“Initially, it looked like a very difficult task to achieve. However, I believed that since Master taught the Fa to all sentient beings in Chinese, that meant that the Chinese language itself also belonged to all sentient beings. I was merely claiming my birthright. This understanding helped to strengthen my resolve to continue learning. After four years, I was able to read all of Zhuan Falun in Chinese at a reasonable speed. This enabled me to join any group Fa-study with Chinese practitioners,” Prashant said. Now he can read all of Master’s lectures in Chinese. 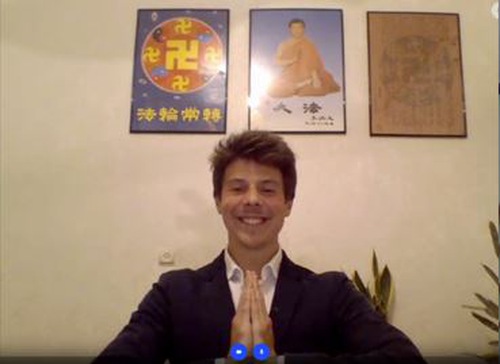 Raimonds talks how he was able to meditate every day for two years.

Raimonds from Latvia began practicing Falun Dafa six years ago. For him, one of the biggest challenges was sitting and meditating for an entire hour. Through memorizing Master’s poems, he strengthened his will and endurance. He learned not to fear pain and not to give up when it became most painful.

Two years ago he decided to practice the sitting meditation every day even if it meant that he had to wake up early or stay up later when he was exhausted. “I’ve never skipped a day since then,” he said. “It’s been almost two years, 650+ days now. It’s become a natural part of me, and I don’t even count the days as I did in the first year. But through doing this I have truly tempered my will, deepened my understanding of the Fa and my true self, and I have experienced magical feelings. I've even sometimes seen various scenes.”

American Youngsters Learn to Give up Attachments 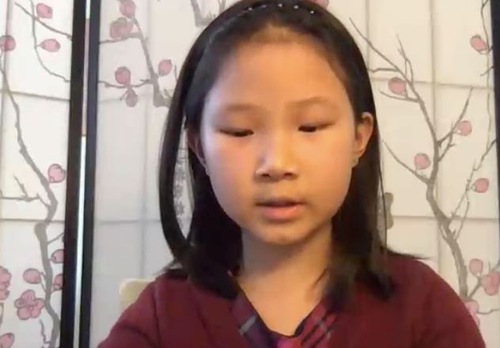 Catherine read her sharing article, titled “Blossoming Like a Lotus Flower in Dafa”

Since the pandemic broke out, eight-year-old Catherine studied the Fa online for three hours every day with other young practitioners. Catherine’s older sister liked her favorite plush toy and she was sad every time her sister took it away from her. One day she realized that she was too attached to material things. She gave her sister the toy as a birthday present.

She talked about how she practiced forbearance because she knew that it was important, “A few days ago I exercised with my aunt and we held our arms up (the second exercise, holding the wheel) for an hour. When I reached the half-hour mark, my arms were in so much pain that I shed a few tears, but I thought to myself that I must keep going. In the end, I endured and finished the entire hour of wheel-holding.” 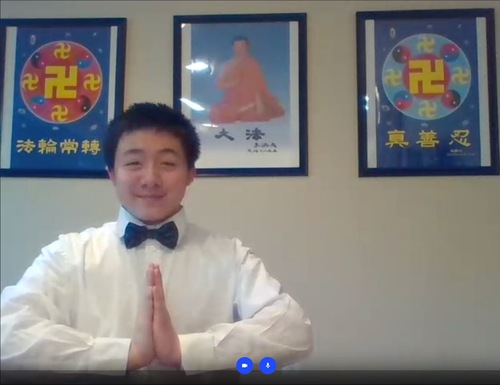 Boen thanks Master and fellow practitioners with “Heshi” after his experience sharing.

Boen’s mother asked him why he wanted to practice Falun Dafa one day after they studied the Fa. Boen said, “Without thinking, I said, ‘I want to go home with Master. I don’t belong to this human society; I don’t want to remain in the six-fold path of reincarnation.’”

Boen, 13, said he spent too much time watching online videos, and this upset his parents. Whenever his parents disciplined him, Boen didn’t think he was in the wrong and instead had a bad attitude. However, after he looked within and reflected on his behavior, he realized his mistake. “At last I tried to look inside and find what I really did wrong. I looked inside, and after I did, not only did my attitude get better but also, I felt like the problem really was my fault,” he said. “I apologized to my dad for my attitude and arguing, and everything got better. My xinxing improved. The rest of the day was like nothing happened at all. Looking within is a treasure that Master has given to us practitioners.” 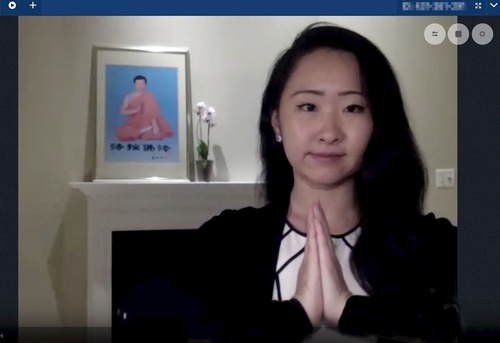 Emily greets Master and practitioners before reading her article.

Emily is majoring in dentistry. She had a strong desire for fame and wanted to stand out among her peers. She thought about changing her career and pursued an additional six-year residency in the most rigorous program so that it would greatly advance her career. However, she was enlightened after she read Master’s Fa teaching about how a Ph.D. medical science student let go of his attachment to self-interest because he was willing to forgo his doctorate degree in order to not kill laboratory mice. Through reading this Fa teaching, she was able to recognize her strong attachments to fame and self-interest, allowing her to broaden her perspective and take these issues lightly.

She said, “I now understand that everything I have achieved is through Dafa. My true responsibilities lie in Dafa and not in my career.” 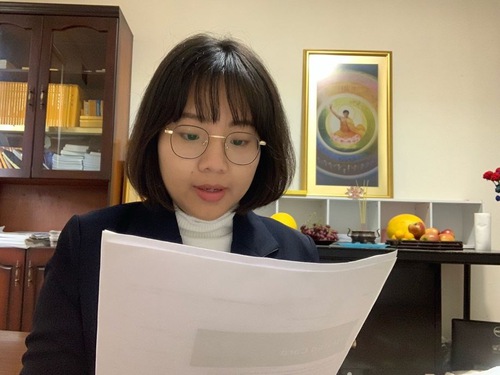 Vietnamese practitioner Danni discusses how she clarified the truth about Falun Dafa to her family.

Danni, a Vietnamese practitioner currently living in Australia, shared her experiences on clarifying the truth about Falun Dafa and validating the Fa to her family. Originally, her family was against her practicing Falun Dafa because of the heavy Communist Party culture in Vietnam. Danni took her father's criticisms as opportunities to look within and improve herself. She began to change her behavior and practice compassion towards her family by taking care of her grandparents and sharing her understandings from the Fa with her father about his troubles at work.

When Danni’s grandfather’s health began to decline, Danni told her father to say, “Falun Dafa is good, Truthfulness-Compassion-Forbearance is good,” to her grandfather. She told them stories of people who soon recovered after saying these words. Danni’s father did not believe in Falun Dafa, so she initially did not expect her father to believe her or repeat the words. She found that he gradually changed.

Through reciting the nine words, Danni’s grandfather’s condition has been improving. Every time her father visits her grandfather, they recite the words together. Now, Danni’s father joked that she had convinced three family members to believe in Falun Dafa.

Danni said, “My father excitedly told me, my grandfather’s situation was getting better. He memorized the nine words and read them very well. Every time dad comes to visit him, he and my grandpa read them together.”

Young Chinese Practitioner: Clarifying the Truth to Her Coworkers

Coffey shared her experiences of clarifying the truth about the persecution of Falun Dafa to her boss and coworkers in the U.S. When she received her work visa, she used the opportunity to gift everyone at her work with a little lotus flower and a card that announced her first day of work as an official employee. The card also explained what Falun Dafa is and about the CCP’s persecution in China.

Coffey said, “Almost every single person came by just to say thanks and to congratulate me on my H1B visa status. Then they hung the small lotus flower I gave them on a very clean and visible place on their desks. Now the little lotus flowers printed with “Falun Dafa is Good” and “Truthfulness, Compassion, Forbearance” have populated my entire work building.”

Later, she also collected signatures from her coworkers on a petition against the CCP’s organ harvesting from Falun Dafa practitioners. One group of colleagues were the last ones to sign the petition, but she didn’t know them very well. When she decided to talk to them, they all signed the petition, and the manager of the group introduced her to another group of people who also signed the petition. The manager who had just learned the truth explained to the group what the petition was about.

“Very quickly, every row on my petition was filled, and I even had to make two extra rows for all the signatures to fit,” said Coffey. “Thank you Master, for arranging this. I’m happy that I did not miss the chance to clarify the truth to these compassionate people just because I didn’t know them personally.”

The conference deeply moved the attendees, with several saying they were moved to tears while listening to the different stories. Many attendees also expressed their gratitude for having a conference to bring young practitioners together during a worldwide pandemic: “The conference was held during this time when things are a little bit chaotic in the world, so hearing others talk about how they maneuvered around the situation and improved themselves during this testing time as cultivators were really uplifting and encouraging.” One college professor who was listening to the conference said, “You remind us, the adults, of cultivating as if we were just starting.”

As this was an international conference, some young practitioners woke up very early in the morning to attend or stayed up very late to listen to all of the experience sharing articles in their entirety. Many young practitioners commented that they felt inspired by how relatable the experiences were and how strong everyone’s righteous thoughts were: “I was very inspired by everyone’s sharing and each of them helped me find my own shortcomings. I realized that I have so much to improve in terms of my xinxing and I am very thankful for this cultivation environment.”