(Minghui.org) May is a special month for Falun Dafa practitioners. On May 13, 1992, Mr. Li Hongzhi introduced Falun Dafa to the public in his hometown of Changchun in Northeast China. The meditation system, based on the principles of Truthfulness-Compassion-Forbearance, has since spread around the world and has benefited people in more than 100 countries. Since May 13, 2000, practitioners everywhere have celebrated May 13 as World Falun Dafa Day.

In Australia, practitioners have benefited from Falun Dafa, both physically and spiritually for more than two decades. On May 2 and 3, 1999, Master Li attended the Australian Falun Dafa Experience-Sharing Conference and gave a lecture, which was later published as Teaching the Fa at the Fa Conference in Australia.

More than 2,700 practitioners from several continents joined the conference and listened to the lectures in Sydney. Recalling that conference 21 years ago, many practitioners remembered the experience very clearly, and below are their stories.

John Deller attended the lectures in May 1999 in Sydney and said he remembered being touched when Mr. Li mentioned the universe’s characteristic of Truthfulness-Compassion-Forbearance.

“It was like a light went on in my heard,” he explained, “Regardless of wealth, age, gender, or cultural background, one can always be assimilated to these principles. That is why I considered that this is the best way for us to return to the origin or our true home.”

During the conference, John felt that he was being immersed in a strong energy. “When continuing to read Falun Dafa books afterward, I gained more understandings about life and how to uplift my mind nature,” he said.

Master Li has given three lectures in Sydney, the first one in 1996. Mr. Luo, a Chinese practitioner in Sydney, had the good fortune to hear Master Li lecture all three times. He said Master Li answered all the questions he had about cultivation.

“My deepest impression at the time was that Master will give his disciples the very best,” he explained. “Because Master explained to us that over the long course of our lives, our lives have gradually deviated from righteousness and purity, and Master could help us return to our best, most righteous state. My understanding was that Master will give us the very best, so I became determined to persevere in cultivation until the very end.” 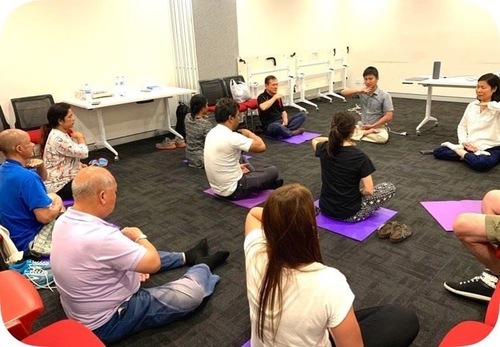 New practitioners learn the Falun Dafa exercises during a nine-day workshop hosted by the City of Canterbury-Bankstown in March 2020.

Janine Rankin from Melbourne had been learning the practice for three months when she listened to Master’s lecture in Sydney in 1999. She had been searching for spiritual guidance since the age of 16, and she found Falun Dafa teachings very profound.

Before the Sydney conference, Rankin said her celestial eye had already been opened by Master. “I was seeing things in other dimensions and different levels of particles—just like what is described in Zhuan Falun,” she explained, “When Master was giving lectures, I surprisingly found that his body was transparent and I could hardly believe my eyes.”

From that conference, Janine said she learned the importance of studying the Fa.

Angela, a 71-year-old originally from Malaysia, used to be a sincere Buddhist. Five years after moving to Australia, she had a number of health issues: she often had headaches and needed surgery to remove gallstones. After she began to read Zhuan Falun, the main teachings of Falun Dafa in January 1999 her health recovered miraculously.

She attended Master's lecture in Sydney in May 1999 and recalled that Master’s compassion moved her to tears. The lecture also helped her understand issues related to Buddhism. “Since then, my husband and I have been dedicated to practicing Falun Dafa,” she said.

She returned to Malaysia last year to celebrate her 70th birthday with family and friends. Though her 74-year-old elder brother had been too weak to travel, Angela was energetic like a young person. Many of her relatives and friends witnessed this and were impressed by Falun Dafa.

Mr. Xiao, the CEO of an independent Chinese media in Melbourne, said he had only learned the five sets of exercises when he attended Master’s lectures in Sydney in 1999. Sitting far away from the stage in the back, he remembers being in tears as soon as he saw Master. “I did not know why—probably because I had been waiting for this for a long time,” he explained.

When Master was answering questions from other practitioners, Mr. Xiao felt as if Master was looking at him and saying those words to him. “Participating in that conference is something I will always remember,” he said, “Master's wisdom and compassion strongly shook my soul.”

“Master Has Been Protecting Our Materials Production Site for Years”