Titled “Harassment & Intimidation of Individuals in Canada Working on China-Related Human Rights Concerns,” the report was a joint effort between the Canadian Coalition on Human Rights in China and Amnesty International in Canada. 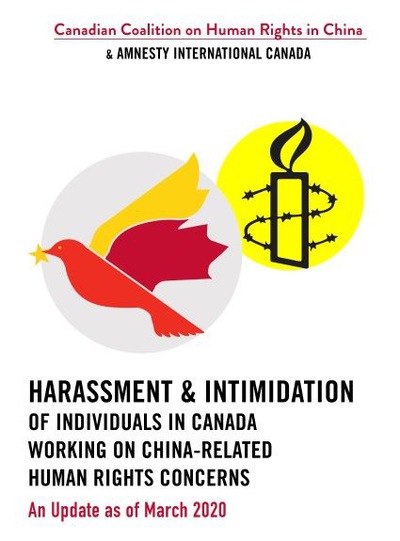 A report released recently by Amnesty International Canada and the Canadian Coalition on Human Rights in China.

This is an update of an earlier report by the two organizations published in 2017 that described organized attacks on activists who advocate for China-related human rights issues.

“The Chinese government has long pursued a strategy of extending political and cultural influence abroad, with the goal of suppressing dissidents and mobilizing overseas Chinese communities to act as agents of China’s political interests,” the report stated.

The report called on Canadian officials to take immediate action to address this issue. Such organized attacks have taken place on college campuses and secondary schools across Canada. The victims include Hong Kong democracy advocates, Falun Gong practitioners and various minority groups.

“Since 2017, practitioners of Falun Gong have continued to be targeted in Canada through incidents of harassment that appear to be linked to the Chinese state apparatus,” the report wrote, “There have been a number of incidents in Ottawa, Calgary, and Winnipeg involving threats, bullying, and harassment of Falun Gong practitioners, as well as false correspondence, a hallmark of the Chinese government, sent out in the alleged-name of Falun Gong in efforts to discredit them. The Falun Gong group in Ottawa has observed that these are not isolated cases, but rather part of a longstanding pattern of persecution by Chinese state authorities.”

One such incident occurred on June 22, 2019, during the annual Dragon Boat Festival. When Falun Gong practitioner Gerry Smith attended the event in a public park in Ottawa, the festival’s CEO ordered him to take off a shirt with words ‘Falun Dafa’ (another name for Falun Gong) and the principles of the spiritual practice: ‘Truthfulness, Benevolence, Forbearance.’ The CEO of the event said the Chinese Embassy was a sponsor of their event and that his shirt was an “inappropriate political statement.” The CEO also said seven to eight other Falun Gong practitioners who were doing the meditation exercises in the same park needed to leave.

“The Chinese government has long attempted to justify its persecution of Falun Gong by vilifying the non-political spiritual practice as a ‘political movement’,” the report wrote, “Many photos from the day clearly demonstrate that the Falun Gong practitioners who were present at the park were not engaging in any form of political protest or demonstration (i.e. no banners or speakers), and that they were simply practicing meditation exercises.”

Grace Wollensak from the Falun Gong group in Ottawa said this was not an isolated incident, but part of 20 years of persecution of Falun Gong by the Chinese state apparatus, including through its consulates and embassies overseas. A Chinese-language article about the incident was posted on websites inside China, labeling Falun Gong practices as being political and unwelcome at an event in Canada. The reports quoted the Festival CEO and repeated anti-Falun Gong propaganda.

Falun Gong practitioners have continued to face incidents of harassment in major Canadian cities over the past three years. “In August 2017, two men disrupted Falun Gong practitioners rallying in front of the Chinese consulate in Calgary, ripping off their event banner and swearing at them. Witnesses claimed that after the confrontation had subsided, two individuals came out of the Chinese consulate to talk to one of the disrupters, inciting suspicion that they had directed them to interrupt the demonstration,” the report stated.

Jeff Yang, the Falun Gong group coordinator in Calgary, also described repeated harassment and insults over the past few years (as recently as June 2019) against Falun Gong practitioners by a man of Chinese descent.

“The use of fake letters and emails has long been a hallmark of the Chinese Communist Party’s overseas campaign against Falun Gong practitioners, to disparage them and to undermine their reputation,” the report stated.

These disturbances against Falun Gong practitioners have continued for three years. “Bizarre, offensive, and sometimes threatening letters and emails have been sent in their name, including to politicians including Judy Sgro (Liberal MP in December 2017) and Peter Julian (NDP MP in March 2019), in an apparent effort to discredit Falun Gong and hurt their relationships with recipients,” the report stated.

Besides not allowing her to attend the Miss World pageant in China, Lin “has also faced intimidation from Chinese state agents acting via her father and grandparents, giving them warnings that if she did not stop her human rights work she would risk turning her family against each other,” the report stated.

Under the influence of the Chinese Communist Party (CCP), Chinese-language newspapers in Canada have also been slandering Falun Gong practitioners. “In July 2015, Today Commercial News, a Chinese newspaper active in Canada, was forced to publish a retraction and issue an apology after reprinting a defamatory article about Falun Gong that had previously been published in the People’s Daily, the official newspaper of the Central Committee of the CCP,” the report stated.

In January 2020, however, Today Commercial News published a second article of a slanderous nature against Falun Gong.

Urging Action from the Canadian Government

Lin’s case is an example of a common strategy used by the Chinese government against outspoken advocates to pressure them through the harassment of their family members living in China, the report stated. Lin has also reported exclusion by parts of the Canadian-Chinese community due to pressure from the Chinese embassy or consulate.

The report urged more action from the Canadian government to address these issues, for example:

1) Appoint a centralized focal point within the government to be the primary frontline contact for individuals and groups facing harassment and intimidation linked to activism on human rights concerns in China;2) Maintain high-level diplomatic engagement with China on the harassment and intimidation issue;3) Continually reassess economic and trade ties with China and prioritize human rights concerns in their bilateral relationship;4) Work with other governments to raise concerns about Chinese human rights violations;5) Affirm its opposition to these violations of normal diplomatic practice;6) Establish an independent public inquiry into methods and incidents of interference specific to the education sector; and7) Examine legislation in other jurisdictions countering covert foreign interference and consider enacting similar legislation in Canada.