(Minghui.org)  As I share my story of how Falun Dafa restored my health and provided me a path to divinity, I wish to express my heartfelt thanks to Master Li on this special World Falun Dafa Day, May 13, 2020. Thank you, Master Li, for giving me a second life! Thank you for giving a second life to millions of people!

Completely Healed after the First Seminar

I had poor health since I was a child and remember visiting doctors frequently. I couldn't remember a single day without illness. I suffered from tracheitis, pleurisy, myocarditis, and pneumonia. These illnesses affected me from childhood through to when I became an adult.

I developed a heart problem in 1990 and I went to a well-known hospital in Beijing that specialized in the treatment of cardiovascular diseases. An examination showed that I had arrhythmia and I was hospitalized the same day. The doctor could not find the cause of my condition.

My heart was beating at a rate of more than 40 beats per minute and I had more than 30 premature beats per minute. The premature beats could not be controlled, though I was being treated with various medications. I fell into a critical state several times and was hospitalized for four months. I didn’t get any better. I was transferred to another hospital and fell into a critical state again. I asked to be discharged after they saved my life. I gave up on the idea of having any medical treatment after that.

I lay in bed all day after I came home and had to take oxygen to support my life. I couldn’t take care of myself. My husband had to look after the whole family and did everything, big and small. I cried all day because I could not change the situation. I felt hopeless and wished I could die.

In 1992, one of my colleagues told me that a very good qigong class was going to be held. She recommended that I attend. My husband accompanied me to the class, and I had the good fortune to attend the first seminar Master held in Beijing.

During the lectures, I understood that the purpose of life is returning to one’s original self and becoming a good person according to the principles of “Truthfulness-Compassion-Forbearance.” I had never heard anything like that before when I had studied any of my previous qigongs. I felt that Master was different from other qigong teachers and was very righteous.

When Master was cleansing practitioners' bodies, I could feel that Falun (Law wheels) were rotating around my body and adjusting my illnesses. I smelled a sandalwood fragrance in the hall. One day there was the smell of a strong Chinese herbal medicine emitting from my body. I wondered why there was still such a smell when I had stopped taking Chinese herbal medicine a year ago. From Master’s lectures I understood that Master had pushed the bad things out of my ill body.

During the lectures, Master said that he was going to install a Falun in each one of us. He asked us to extend our hands. I held out my hand. Master asked us what we felt. I felt my palm was warm and that a Falun was rotating on it.

I experienced dramatic changes in my body and mind after several days. I went to the lecture hall in a taxi by myself. Soon my premature heartbeats and arrhythmia symptoms reduced. I completely recovered after I practiced Falun Gong for some time.

I attended Master’s second seminar. On the last day, practitioners took photos with Master and asked for his autograph. Master wrote down these two verses for me on a piece of paper:

“Cultivating gong has a pathmind is the wayOn the boundless sea of Dafahardship is your ferry”(“Falun Dafa,” Hong Yin) 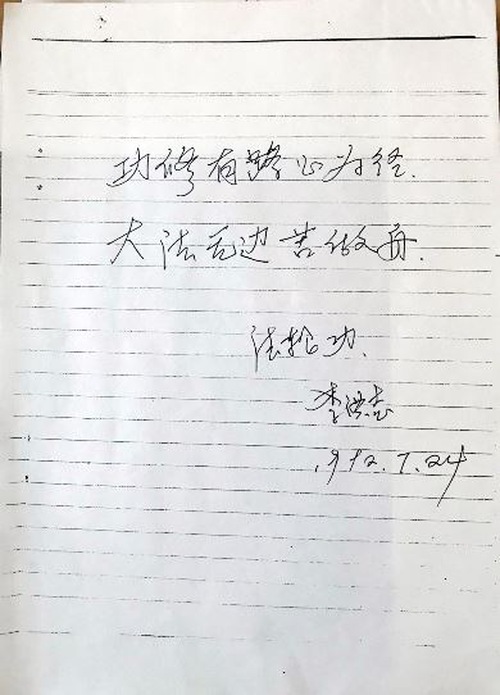 Picture of Master’s Inscription
This precious piece of paper has been with me all these years. I didn’t have a high-level understanding of Dafa then, but I made up my mind to cultivate only Falun Dafa and never to give up.

I felt lighthearted and my family became more harmonious after I practiced Falun Dafa. My neighbors and friends were amazed by the improvement in my health, and many of them also took up the practice.

Witnessing Miracles in the Seminars

1. Removing Tumors in Other Dimensions

Master introduced Falun Gong as a qigong practice initially. He treated illnesses for practitioners and ordinary people. I witnessed many miracles during this initial stage.

One of my relatives was diagnosed with an unusual tumor called grape hysteromyoma. A doctor said he had to remove her uterus to remove the tumor. She was young and didn’t want to lose her ability to have children, so she came to learn Falun Gong.

While removing her tumor, Master grabbed in the air a few times. She felt an unexplainable power taking something out from her belly thread-by-thread. She felt her belly become lighter after a while. She had an examination in the hospital later on and found that the tumor had disappeared. She didn’t spend a penny or have surgery but her tumor was gone. She has been healthy ever since.

Master held a seminar in the Army's Second Artillery Auditorium in Beijing. A 40-year-old female practitioner came to Master for treatment. She had a hemangioma on her neck. The doctor said that it was too dangerous to remove it by surgery because it was too close to her trachea. Master got some details from her and then stood opposite her. Master grabbed in the air near her neck a few times. Her tumor became smaller and smaller then vanished. It took only a few minutes. Dozens of practitioners witnessed this scene. Everyone was shocked but felt happy for her. She went home and vomited blood clots and some sticky stuff then completely recovered.

2. A Deaf Boy Can Suddenly Hear and Speak

Another memorable event took place at the Army's Second Artillery Auditorium. Master and his daughter came out from the backstage area when a young father with his five- or six-year-old boy stopped Master politely. The boy looked lovely, with chubby cheeks and big eyes, but he was deaf and couldn’t talk. The father asked Master to cure his son.

Master agreed kindly. He looked at the boy’s ears and then started to cleanse his body. Master grabbed in the air near the boy a few times and then asked his daughter to pat the boy’s ears on each side. The boy was not happy when Master’s daughter patted him but soon a miracle happened. Master talked to the boy and asked him to count to five. The boy heard Master and clearly counted to five. Everyone heard his voice.

His father was amazed and so touched that he knelt down in front of Master and started kowtowing. Everyone around was shocked and then became excited. I will forever remember this scene.

More and more people came to attend Master’s seminars after 1994. There were over one thousand people and sometimes several thousand people in each seminar. I went with a dozen practitioners from Beijing to Changchun to attend the 7th Seminar of lectures held by Master in Changchun in April 1994.

Several practitioners and I walked from our hotel to the Mingfanggong Auditorium in Jilin University on the third day of the seminar. A big truck was in front of us and its trailer was full of solid iron pipes with some stretching beyond the back of the trailer. We were walking behind the trailer chatting. All of a sudden the truck stopped. We were not aware of this and continued walking. An iron pipe stopped right in front of my neck only 10 centimeters away from me. I felt something had prevented me from going forward. The practitioners behind me were terrified, but I was fine and safe from danger. I realized that Master was protecting me.

I couldn’t see what Master had done for me in other dimensions, but my knowing side must have been able to see that Master had dissolved the tribulation for me. No words could express my gratitude to Master for his compassion. That was the reason I could not stop my tears in this dimension. There are thousands upon thousands of practitioners. How much suffering has Master borne for us over so many years? No practitioner knows.

My Luckiest Time Being with Master

We followed Master and attended the 1992 Oriental Health Expo. Master received the most awards of all the qigong masters at the expo. Much to our surprise, each of the staff members received a card from Master in January 1993.

Master wrote on my card: 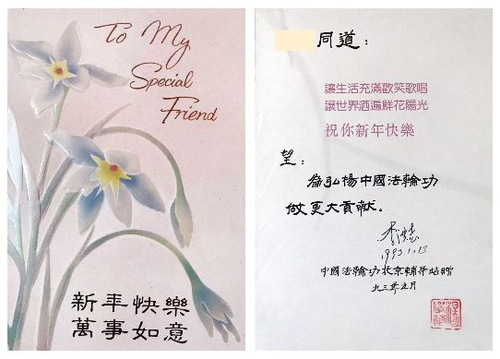 Card (The practitioner’s name has been redacted to avoid persecution.)

I was so moved. I only did what I should have done. Master gave me such a warm and precious gift. Master’s words were what I wanted to do. I would make greater contributions to the spread of Dafa. I have kept this precious card as well as the beautiful memories associated with it.

Master led some practitioners and attended the Oriental Health Expo in Beijing in December 1993. I was fortunate enough to become one of the staff members again. There were more than 100 Chinese medicine and qigong stalls at the expo, and there were not many people at the other stalls. The Falun Gong stall had the most people.

One practitioner grabbed in the air and held a spirit in his hand while he treated a patient’s illness. He asked me to listen and I heard the spirit shouting. Some spirits were tough and bit the practitioners, who bled and blistered just like Master said in his lecture.

Another practitioner emitted energy from his hands when he was curing illnesses for the patients. His energy flashed like electricity and whoever he treated recovered immediately. It was amazing. Patients who had cancer, tumors, were paralyzed or had spirit possession were all cured at the expo. I witnessed all of these things personally.

Because of his amazing power to cure illnesses, Master received the highest award “Cutting Edge Scientific Progress Award” and the “Special Gold Prize.” Master also won the title of “Most Popular Qigong Master.” We were so happy and truly felt that Falun Dafa was the universal Dafa and the most righteous Fa, just like what Master has said. Each of our staff members received an honorary certificate that was awarded by the Expo. We felt so blessed for being able to contribute to the spread of Dafa.

Unwavering Belief in Dafa Despite the Persecution

I have spent half of my life cultivating in Falun Dafa, since 1992. I have followed Falun Dafa’s principles of “Truthfulness-Compassion-Forbearance.” Master’s teachings have encouraged me and have kept me determined in my righteous belief through the ups and downs and during difficult times.

Because I had benefited from practicing Falun Dafa, I stepped out to tell people the facts after the Chinese Communist Party (CCP) started the persecution in July 1999. I was arrested and detained several times. But my belief in Dafa has never wavered over the past 20-plus years despite the harsh environment. It is unpardonable that the CCP persecutes Falun Dafa. I believe that it will not be long until the truth of Falun Dafa is revealed to people.

“My teaching Dafa widely is to offer salvation to all.” (“Seeking Discipleship with Teacher” from Essentials for Further Advancement)

Who can really know the profound meaning of this sentence? How much does Master have to bear and sacrifice to save us? It is Master’s boundless compassion to offer salvation to all. No human language can possibly describe it. Thank you, Master, for spreading this beautiful Dafa, which gives people in this sinful world an opportunity for hope and a bright future!

“Woman Serving Eight Years for Her Faith Abused in Prison”

“A Season of Reflection and Gratitude”