(Minghui.org) Falun Dafa practitioners from Miaoli celebrated World Falun Dafa Day by holding various activities throughout April and May. May 13 is the 28th anniversary of Falun Dafa’s public introduction and coincides with Mr. Li Hongzhi (the founder's) birthday. It's also the 21st World Falun Dafa Day.

Practitioners in Miaoli, Taiwan held the activities at Toufen Park and Bo’ai Park on April 12, and Family Park and Yuanli Stadium on April 19. 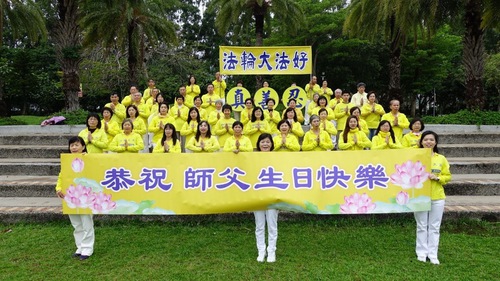 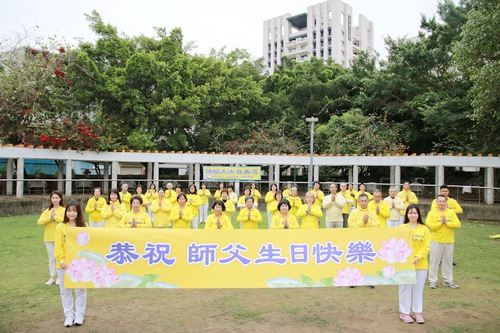 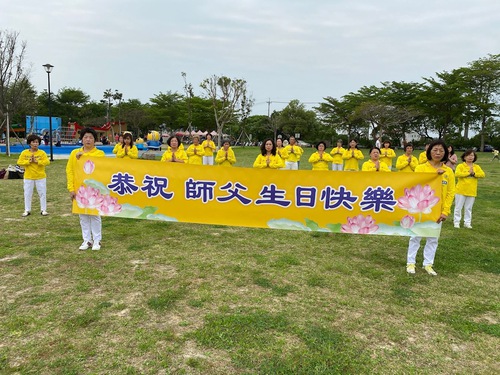 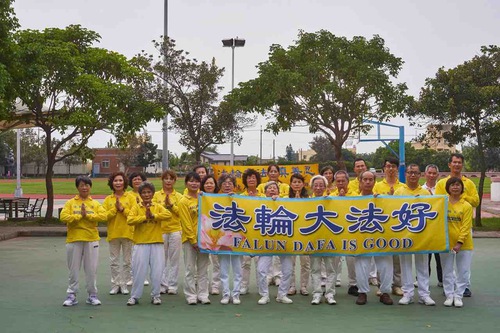 Falun Dafa, also known as Falun Gong, was introduced to the public in Changchun, China on May 13, 1992, by Mr. Li Hongzhi. Due to its marvelous health and moral benefits, Falun Dafa quickly spread to over 100 countries and more than 100 million people practice it.

To mark this public introduction, practitioners set May 13 as World Falun Dafa Day and celebrate it every year, as well as wishing Master Li a happy birthday.

Due to the coronavirus (often referred as the CCP [Chinese Communist Party] virus for its initial cover-up and misinformation) pandemic, practitioners in Miaoli followed the government’s prevention policy and conducted their celebratory events on multiple days and at different locations.

They told people about Falun Dafa and how the CCP is persecuting it. Some people knew that Falun Dafa is good, but couldn’t understand why the CCP wants to persecute the spiritual belief. Practitioners explained that the CCP controls China through lies and violence, which are against Falun Dafa's principles of Truthfulness-Compassion-Forbearance.

Many people were appalled to learn of the CCP’s state-sanctioned live organ harvesting. Due to the worldwide pandemic, people have increasingly become aware of the evil nature of the CCP. 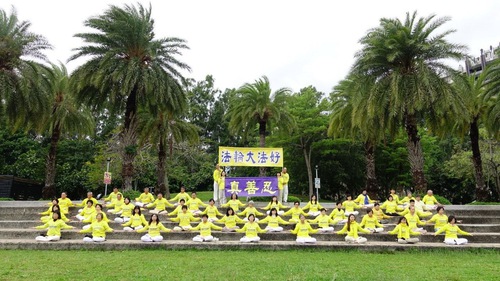 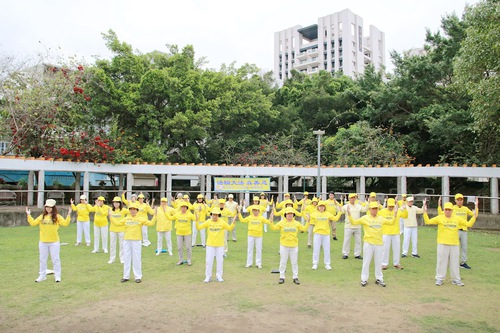 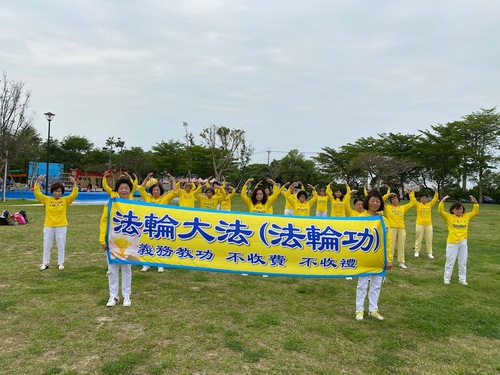 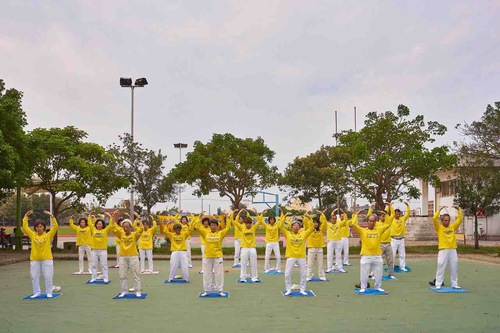 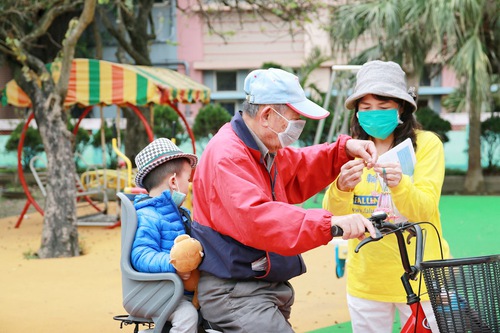 A passer-by accepts a paper-folded lotus flower from a practitioner.

Practitioners Express Their Appreciation for Master and Falun Dafa

Hsu Wan-fei has practiced Falun Dafa for 17 years. Before she began practicing, she relied on several medicines. She often had stomachaches and easily caught colds. She was later diagnosed with phase two cervical cancer. Chemotherapy made her vomit, lose weight, and she felt ill. She felt life was hopeless and very hard.

One day, a friend told her that many people enjoyed better health after they began practicing Falun Dafa and the classes were free. She immediately looked for a Falun Dafa workshop and attended it.

When she returned to the hospital for a check up a month later the doctors told her the tumor was gone. Wan-fei shed tears of gratitude and knew she was so fortunate to practice Falun Dafa! Since then, she has been healthy. 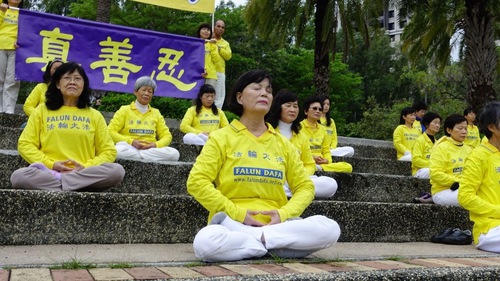 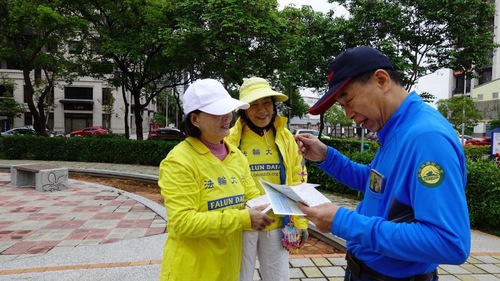 Talking with a passerby about Falun Dafa. 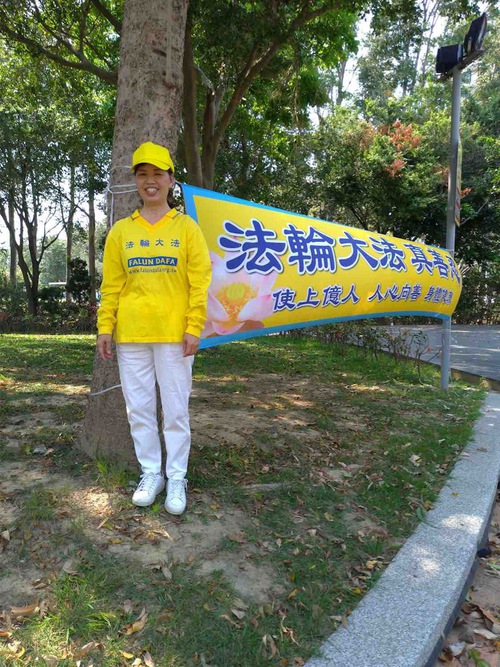 Soon after Hong Ching-mei started practicing Falun Dafa in 1997 all her illnesses disappeared. She follows Master Li’s teachings and looks within to eliminate her negative thoughts and attachments. She felt great after she passed a tribulation and knew she had improved.

She always strives to be a better person. “I appreciate Master,” Ching-mei said. “I will be more diligent in cultivation. I wish Master a happy birthday.” 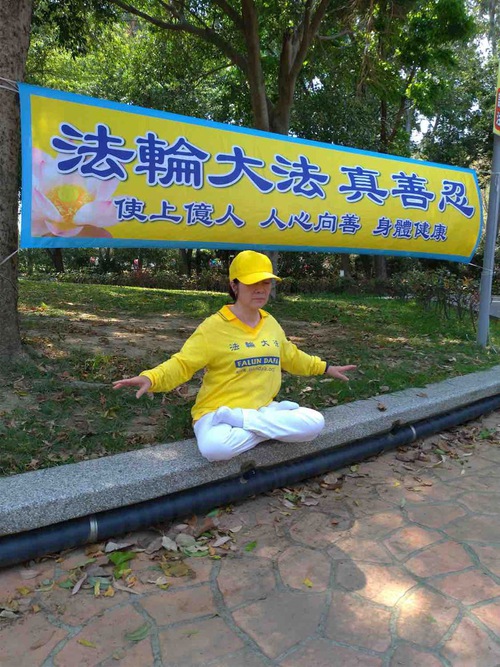 Before Yang Yue-lan started practicing Falun Dafa in 1998 she had gynecological problems, asthma, allergies, stomach ulcers and kidney problems. She spent a lot of money on treatments but nothing helped.

She followed Truthfulness-Compassion-Forbearance in her daily life, and all her illnesses disappeared after she began practicing. Because she knows Falun Dafa is good she wants to tell others, so she participates in various efforts to raise awareness of the CCP’s persecution. She distributes fliers to residents and tourists. She's also made phone calls to police officers, prosecutors, and judges in China to clarify the truth for over ten years.