(Minghui.org) Editor’s note: The persecution of Falun Dafa officially began on July 20, 1999, with sweeping arrests of practitioners all over China. When the communist regime denied all avenues of appeal and continued to detain, brutalize, and slander practitioners, a number of practitioners traveled to Beijing, where they held banners to publicly call for an end to the persecution. Some practitioners from outside China went to Beijing as well, such as the three from Australia described in this article.

I am a Falun Dafa practitioner from Europe and Australia. When I first got the book Zhuan Falun in 1997, I read it from cover to cover. It took two days and one night, and I felt as though I was holding my breath until I finished. I thought the book was the secret of secrets that I had been looking for all my life.

I had previously studied the philosophy of Buddhism in college, read countless books on spirituality, and had many dreams in which masters tried to teach me, but none of them felt “right.” I yearned deeply to find my true master and my true purpose in life, and I even considered becoming a nun in a Buddhist temple.

So, when I finally found Dafa I cherished it immensely and even found it too precious and high-level to share with others. Of course, I soon realized that this was not Master Li’s (the founder) wish at all, so I participated in events to introduce Dafa to the public.

During the Hong Kong experience sharing conference in 1999, many practitioners of Chinese descent decided to go to China afterward to appeal and put an end to the persecution that had just begun. I understood their reasons, but did not contemplate it any further. But after I sat in meditation one evening, a thought came to my mind: “I am going to China.”

This thought came out of nowhere, and I felt that it was not from my human self. It felt very clear and somehow different from all my other thoughts that came from attachments, even well-meaning ones. So, I made up my mind.

When I told other practitioners in Australia, some thought it was a good idea, but others cautioned that if my intentions were not right, I might damage the reputation of Dafa by going to extremes and acting out of zealotry. Many thought that the best way for Western practitioners to safeguard Dafa and support practitioners in China was to stay in Australia and appeal to the government there.

I agreed with them but couldn’t shake the feeling that my decision to go to China stood apart from all these considerations and was a “straight line” that I had to walk.

The only thing left was to figure out what I would do there and how to do it. I thought that once I was in China, I would find a way to support Chinese practitioners in upholding the Fa and perhaps share our experiences of cultivating in different environments. I also wanted to let them know that practitioners all over the world were asking their governments for help to end the persecution in China.

A Chinese practitioner from Australia who'd introduced me to Dafa pointed out that my motives were too vague. She said that if I was so determined to go through with it, I should at least write a letter and hand it into the Chinese Government. I had already written similar letters to the Australian Government and agreed with the idea.

I knew, however, that I would not go to Tiananmen Square to hold up a banner. Chinese practitioners were putting their lives on the line and only resorted to appealing on Tiananmen Square because all avenues of appeal had been blocked and they were left with no other choice. I saw their actions as truly magnificent and brave. But for a Westerner, I understood at the time that the worst thing that could happen was to be quickly and quietly deported, and this would not accomplish much.

The process of writing the letter to the Chinese government actually helped to crystallize my thoughts and intentions. I thought of Master’s teaching to always think of other people first, and it allowed me to quickly discard attachments in order to uphold Dafa in a positive way. I was learning to use only my “divine side,” as it was the only part of my nature that contained all the positive things given by Dafa. Even with the best intentions, how could one succeed in upholding such a great Fa using the limited, petty human side with attachments hiding behind every intention?

I told two practitioners who are brothers about my intention to go to China. They also wanted to go, but I worried that three blond Westerners would draw too much attention and risk all of us being deported straight away. We accepted the possibility and planned to hand in the letter to customs officials if it came to that.

We met a practitioner from Australia, who gave us an electronic device that contained the text of Zhuan Falun. We read a lecture every night and did the exercises every day in the hotel room. We met a Chinese practitioner who was about 18 years old. She and the Australian practitioner asked where we wanted to go. We said, “Tiananmen Square.” 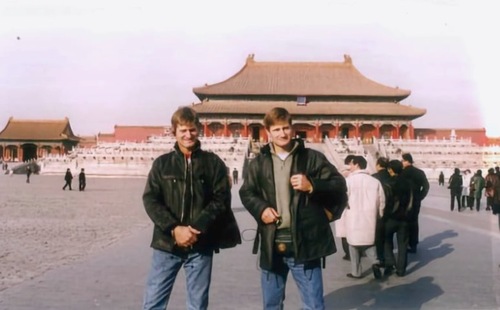 The two brothers in Beijing

The five of us walked straight through the middle of the square, which was surrounded by police vans and officers. We just walked and shared our experiences. The young practitioner told us that she was alone at home because her whole family was in jail for appealing to the government and speaking out for Dafa. 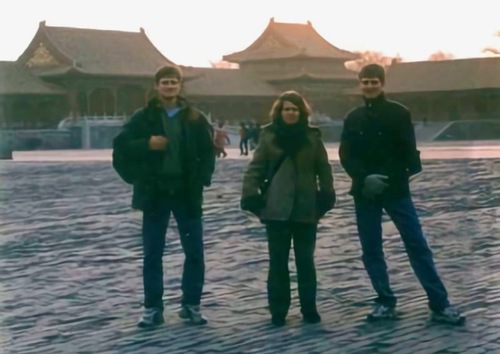 The three of us in Beijing

The days that followed were full of challenges. We lost contact with the Chinese group. Not being able to speak Chinese, we couldn’t order food. It was extremely cold outside, and trying to extend our hotel stay one day at a time was nearly impossible because we couldn’t communicate with the staff.

Every time we went out, we had to prepare ourselves to be asked whether we were Dafa practitioners, which would mean handing in the letter to the police and ending our trip. But once we had resigned ourselves to this worst-case scenario, we became more relaxed. Every day we talked about our attachments as soon as they came up and knew how important it was to let them go. It seemed as though the tests that we passed were crucial in enabling us to stay in China yet another day.

It soon became apparent that we had no control over any part of our trip. We waited for practitioners to contact us if they wanted to meet. In the meantime, we decided to be like ordinary tourists and go with the flow. 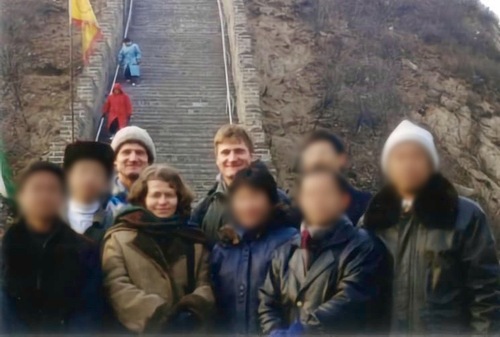 The three of us with other practitioners at the Great Wall

On the second day, a practitioner from Sydney asked if we wanted to go on a bus with twenty other practitioners to drive around Beijing and share experiences. I decided against it. If the bus was stopped by the police, it probably would have meant getting deported. I didn’t want our presence to put the other practitioners at risk either. Later, we heard that those practitioners were arrested while sharing experiences in a hotel room.

Walking the streets of Beijing, I saw people suffering from the cold and poverty. We were suffering too, but we had Dafa. I thought of the millions who were suffering like this without knowing the Fa. And the thousands of jailed practitioners were suffering even more to protect the Fa for everyone.

I felt deeply humbled and realized that every second in this maze offered endless opportunities for us to enlighten to higher principles. With Master’s help, we were “gliding” through all this suffering, learning to act without intention (wuwei) and letting go of more and more attachments. At the same time, I felt how effortless cultivation can be and how easily attachments fall away if one surrenders completely to Master’s plan. There was order in everything that happened to us, and we just needed to look within and make the right decisions when opportunities appeared.

One day we were forced to find another hotel. There was an expensive place down the street, but they refused to accommodate us. The owner had spent two years in Melbourne as a student, however, and he became very friendly with us. We asked if he knew of a good place to visit outside Beijing, and he suggested Xi’an. He immediately arranged tickets for us on a night train and even drove us to the station as well.