(Minghui.org) Professor Wang Zhongyu is one of the over 100 million people worldwide who practice Falun Dafa, also called Falun Gong. He says his physical and mental wellbeing have improved significantly as a result of regularly reading Zhuan Falun, the main book of the practice. He also feels that Falun Dafa has given him inspiration in his field of research. 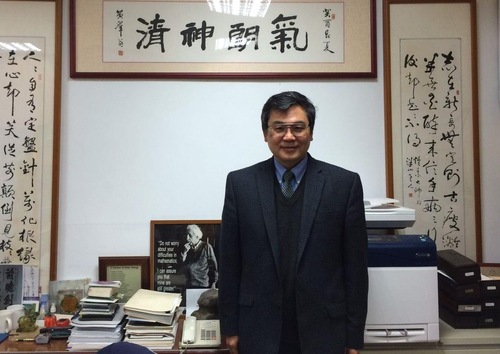 Professor Wang Zhongyu saw improved physical and mental health through practicing Falun Dafa. He also feels that the practice has given him inspiration and enabled him to make breakthroughs in his academic research.

Professor Wang Zhongyu obtained a degree in civil engineering at Taiwan's National Central University (NCU). He studied martial arts while attending the university, and became very interested in qigong and cultivation practice. At the end of 2005, he worked at the University of Texas in the U.S. When he mentioned to his department secretary that he was searching for a qigong practice, she suggested that he try Falun Dafa.

He took the secretary's advice and started reading Zhuan Falun. The first time he read the book online, he read the following paragraph:

He was moved by these words because they echoed the theory of mechanics he was studying at the time. He completed Zhuan Falun in three days. Initially, he'd thought it would be similar to Buddhist scriptures but was surprised that it was completely different. The book talked about actual cultivation practice, and this was what he had been searching for, for many years. He contacted a Dafa practitioner who was teaching at National Central University. The practitioner shared with Professor Wang about the positive changes he and his family experienced after they began practicing Falun Dafa. So, Prof. Wang bought every available Falun Dafa book and started to practice.

Prof. Wang frequently caught colds, had fevers, sore throats and suffered from various aches and pains. The most significant change he's experienced after taking up Falun Dafa is increased immunity and high energy levels. He's 61 years old now, yet he looks much younger than others his age.

He and another professor went mountain climbing once. On the way back, his companion developed a high fever which led to his face being paralyzed. His colleague's doctor said he had little chance of recovery. Prof. Wang encouraged him to practice Falun Dafa. Later, his colleague said, “When I was watching Master Li's [Falun Dafa's founder] lecture tapes, I felt my facial nerves being adjusted.” When Prof. Wang went to see him, his colleague's facial paralysis was gone. The incident strengthened his own faith in Dafa.

Prof. Wang studied mechanical engineering for his PhD and has conducted in-depth research in the theory of mechanics and its application. He said that Dafa has given him inspiration in his academic work. He is able to use this knowledge to develop new engineering techniques, and monitor structures such as bridges, buildings, tracks, and electrical towers, to evaluate whether their functions are sound and make recommendations for reinforcement and repair.

“Through practicing Falun Dafa, I'm able to grasp the principles behind things and I come up with ingenious, innovative approaches to solving engineering problems,” said Professor Wang.

He noted, “Dafa's principles of Truthfulness-Compassion-Forbearance are a real manifestation of the work I do in my area of research.” In light of the frequent natural disasters occurring in recent years, Prof. Wang hopes to develop techniques that can be used to protect human lives.

Learning to Treat Others with Kindness

Prof. Wang said that his character has also improved as a result of practicing Falun Dafa. As a scholar professor, he used to compete for academic research programs and pursue success in his career. He would be unnecessarily strict with his students when he was under pressure and he frequently lost his temper. After studying the teachings of Dafa, he understood the meaning of life and learned to treat others with kindness.

He said, “Compassion is very important. If you aren't compassionate, you won't be able to get along well with others. When you run into conflicts with people or become upset about something, it's caused by your attachment. If you get angry with your students because you don't like what they do, you aren't being tolerant. Acting this way is against the teachings of Falun Dafa.”

The more he practiced cultivation, the more Prof. Wang realized that compassion comes from being selfless. This has taught him to see things from other people's perspectives and reflect on his shortcomings when he runs into a problem.

He adopts the same principles when handling family relationships. His wife, who also practices Falun Dafa, reminds him about the teachings when he loses his temper. He shared, “The best thing about cultivating Falun Dafa is that we have the teachings to guide us. They act as the criteria for our thoughts and actions.”

Raising Awareness about the Persecution in China

As chairman of the Taiwanese Association for the Rescue of Falun Gong Practitioners Being Persecuted, Prof. Wang has actively participated in screenings of Falun Dafa documentaries at several universities in Taiwan. He realized that the Chinese Communist Party has infiltrated the academic circle in Taiwan. He hopes that he can talk to his colleagues with compassion about the persecution of Falun Dafa in China and expose the brutal crimes committed by the Chinese Communist Party.

“Belated News: Liaoning Man Incapacitated after Years of Imprisonment for His Faith, Dies a Decade Later”