Changing from Being Bossy and Irritable to Being Kind and Gentle

(Minghui.org) Before being introduced to Falun Dafa, Lian Yin grew up with her parents’ great hopes and dreams squarely on her shoulders.

“My father is the eldest child,” she said, “and I would have been the eldest grandchild in terms of status in the family had I been born a boy. But my parents still hoped that I would bring honor to the family by excelling academically, earning a Ph.D., and gaining the respect of others by becoming a distinguished leader.”

Lian Yin felt duty-bound to fulfill her parents’ expectations. “I love my parents. I wanted to do well to please them, like the time I ran for president of our campus chapter of AIESEC (Association Internationale des Étudiants en Sciences Économiques et Commerciales) and went to Canada as an exchange student. Actually, I’m very much an introvert, and I had to force myself to do those things.”

Putting up a facade of confidence has not been easy for her. “On the surface, I appeared confident and outgoing, but inside I was very unhappy and fearful. I paid too much attention to what other people thought of me and read too much into how they would look at or behave towards me. Before leaving the house, I always had to tell myself that I was the best, that I would not fail. I was miserable!”

“Before giving birth to me, my mother had a dream in which I was surrounded and escorted by the ‘Eight Deities’ on my descent to this human world. Under my family’s influence, I was a vegetarian from a young age and had come into contact with many religions. But, in my quiet moments I was always mulling over why my life had turned out the way it had, and if I had indeed come from the heavens.”

Taking Up Cultivation in Dafa

Forever on the search for answers to her mental struggles, she read many books on religion. “Once, I found a great book and recommended it to my professor, but he said to me, ‘I have already found the greatest book on earth.’ I asked him what the book was. He told me it was called Zhuan Falun.”

Lian Yin bought the book, but it was not until a brush with death that she came to understand the real meaning of the book.

“That day I had stomach pains,” she said, “so I went to the pharmacist to buy medicine. But on the same night, I was in so much pain that I couldn’t move or speak, and for the first time I felt I was about to die. I used to think I could achieve anything by working hard, but that experience was a shocking reminder to me that human life is extremely fragile, and it can end in the blink of an eye. One day, after finishing my classes, I caught sight of Zhuan Falun on my bookshelf and felt compelled to read it again. This time I was touched to the core. I had a strong feeling that I had been looking for this for a long time and had finally found it.”

The book woke her from the nightmare of her past. She said, “I had to work really hard in the past to build myself up mentally so as to appear strong and confident. But, after reading the book, all my past self-doubts and unhappiness seem to have been wiped away by Master Li (the founder of Falun Dafa). I had never felt more confident and at peace with myself.”

It was not just a spiritual rebirth but also a physical one for Lian Yin. “My health was not that good before. I suffered from period pains, which was sometimes so bad that I passed out. Starting from when I was little, I used to have all sorts of medications in my bag–for my eyes, my period pains, and my brain–which I took in large quantities on a daily basis. After I decided to practice Falun Dafa, I could let go of my medicines. Falun Dafa is really amazing!” 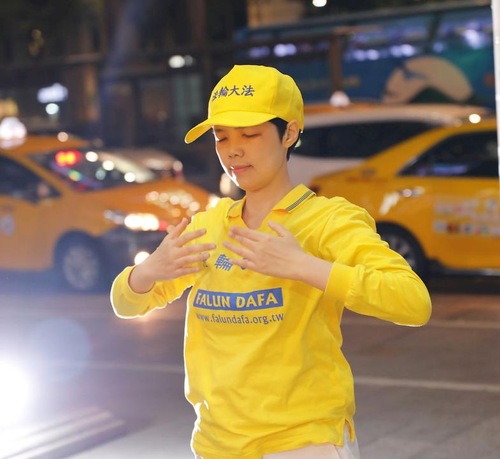 Kindness Heals Division in the Family

Lian Yin’s decision to practice Falun Dafa was met with opposition from her parents. “Since I was young, our family’s religious belief has always been a big part of what we do together as a family. They took my breaking away from that belief as a betrayal.” It has not been easy for her under such enormous pressure from her family, but she has never given up on her newfound faith.

“I’m certain that practicing Falun Dafa is the best choice I have made in my life. But being part of this family also means that I have a responsibility to show everyone the beauty of Dafa. I never liked doing housework, and my parents used to nag me about that. But since I started practicing Dafa, I’ve taken the initiative to do the dishes, clean the house, and spend time talking with my parents. I’ve become more appreciative of the sacrifices and contributions they make for the family.

“If I do something wrong, my parents will remind me, ‘Don’t you Falun Dafa people practice Truthfulness, Compassion and Forbearance?’

“One year, my parents caught the flu. My father coughed day and night and had to seek urgent treatment in the end. He called and told me that he might be hospitalized, so I went to the hospital and warmed his hands and face with hot towels, gave him massages, and constantly changed his hot water bottles to keep them warm. To ease his cough, I put a rolled up rug under his neck so he could lay in comfort.

“I wrapped myself in a jacket to keep warm in the air-conditioned room. Even though it was cold and noisy in that four-bed room, I felt very peaceful inside and thought about what Master had said:”

“Of course, in practicing cultivation in ordinary human society, we should respect parents and educate our children. Under all circumstances, we must be good and kind to others, not to mention to our family members. We should treat everyone in the same way. We must be good to our parents and children and be considerate of others in all respects. Such a heart is thus unselfish, and it is a heart of kindness and benevolence.” (Lecture Six, Zhuan Falun)

“I knew I was able to give so much of myself to care for my father because I was a practitioner,” she reflected.

Lian Yin’s considerate and peaceful demeanor slowly dissolved her father’s misunderstanding of Falun Dafa. “When I asked my father later if he wanted to listen to Master’s lectures, he agreed. The more he listened, the quicker his condition improved. He was discharged after four days. I think my parents used to worry whether they would be looked after in their old age because they didn’t have a son. But now they’ve realized otherwise.

These days, whenever she talked to her father about the pressure of work or other difficulties in her daily life, her father would advise her, “You can recite, ‘Falun Dafa is good.’ You have nothing to fear because you practice Truthfulness, Compassion and Forbearance.”

After taking up Falun Dafa, Lian Yin realized that quite a few students at her school also practiced. Luo Yu Tang was one of them.

Lian said, “I used to look at a potential date based on his looks or strong emotion he evokes in me. A love affair was supposed to be exhilarating! But being with Yu Tang, I found him very easy to talk to, much like talking to my family, and I didn’t have to put up a facade or hide anything from him.”

Over time, Yu Tang became a good friend she could talk to about her problems. She said, “One of my project partners demanded that I finish my part and hand it to him two weeks before the deadline. I refused and was suspicious about the request. I moaned about it to Yu Tang. To my surprise, he said that person must have had a good reason for his unusual request and that I should just do it. Yu Tang always thought about others first, and it didn’t matter if it meant he had to shoulder more work or responsibilities. I, however, was the opposite. I would first make demands of others and find reasons to justify them.”

Lian Yin found herself very much at ease with the considerate and down-to-earth Yu Tang. Their relationship blossomed, and the two married in 2012 with the blessings of their parents.

Having been brought up like a boy in the family, her strong personality proved hard to change. She said, “I was actually quite strong-willed. When we first got married, I made all the decisions and expected my husband to do as he was told. If he disagreed, I would argue, “I’ve told you the best way to get it done. Why don’t you listen to me?” Later on, I came across this poem in Hong Yin III:

“I felt as if it was describing me. I repeated those words to myself over and over again as I kept examining myself, made changes to shed my dominating personality, and learned to be a gentle, supportive wife.”

She realized that problems occur when one’s thoughts or actions are not aligned with the teachings of Dafa. That’s the time to correct oneself by looking within first instead of finding fault in others, she said.

“Everyone is different due to their life circumstances and their fate in life. I can’t control anyone else’s life, including those of my family. Later on whenever there was a disagreement between my husband and me, I would ask him, ‘What do you think about this? Is this the right way?’ I would even go as far as asking him why he would think in a certain way. Was it because I overlooked something?”

Yu Tang noticed the changes in his wife. He said, “Now, when she comes across any work issues, she would discuss with me the possibility that she might have been resentful or jealous, or not have really considered the issue from the other person’s perspective. Often there would be a change in the outcome as soon as she started to examine herself and take the initiative to change herself first.” 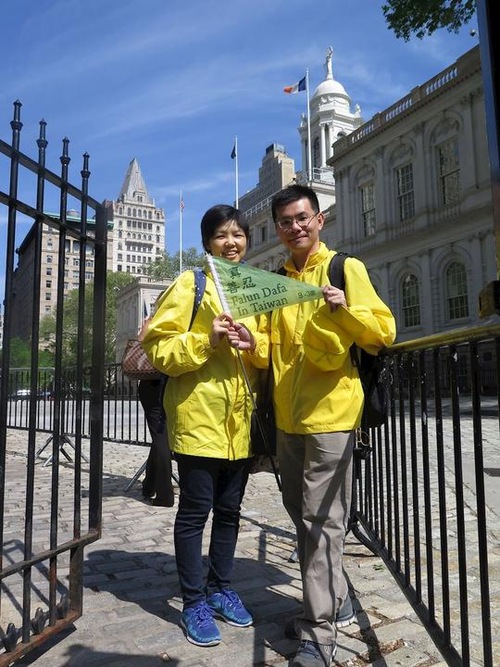 “With a shared purpose you came to the worldIn gaining the Fa you have led the wayAscend to heaven on a future dayUnfettered, with boundless power of Fa”(“Fulfilling the Wish,” Hong Yin, Translation Version C)

Lian Yin and her husband support each other and are working toward the same goals in Dafa. She said, “We normally go to tourist sites to send righteous thoughts. He goes on Saturdays and I go on Sundays. We sometimes go abroad to join practitioners’ activities. We are very supportive of one another even though we don’t have a lot family time together.”

Lian Yin said Falun Dafa not only changed her into a kind and gentle person but also gave her a healthy body and a sunny personality. “I’ve changed from being a bossy and irritable person to being generous and thinking of others’ needs first. I’m very grateful to Master. In my experience, everything Master has said is so very true. If you really live by the principles of Truthfulness, Compassion and Forbearance, you would consider yourself to be most fortunate to have become a Falun Dafa cultivator. I also hope that more people will come to understand ‘Falun Dafa is good!’”

“Belated News: Dalian Doctor Dies in Depression Due to Persecution of His Family”