(Minghui.org) Brazilian Falun Dafa practitioners gathered in Sao Paulo on the last weekend before Christmas in 2020 to hold a parade. Practitioners on a float informed spectators via a loudspeaker about Falun Dafa and the persecution of Falun Dafa in China. 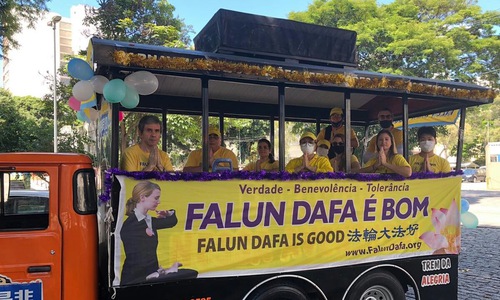 With Christmas and New Year’s Eve approaching, Brazilian practitioners wish their Master a Merry Christmas and a Happy New Year from afar.

Sao Paulo is the largest and most populous city in Brazil. Falun Dafa practitioners decorated their float with balloons and ribbons, and hung banners with the words “Falun Dafa is Good,” and “Stop the Persecution” on the front, sides and rear of the float. The float travelled through the city center slowly while practitioners demonstrated the exercises on it, raised awareness through the sound system, and handed out flyers on the street. 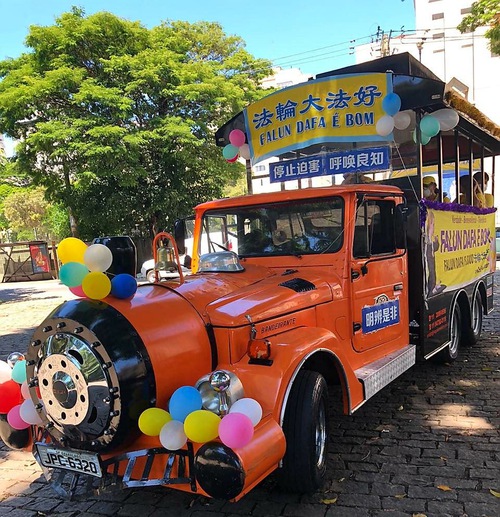 Practitioners put their hearts into creating the float to share Falun Dafa with the people of Sao Paolo. 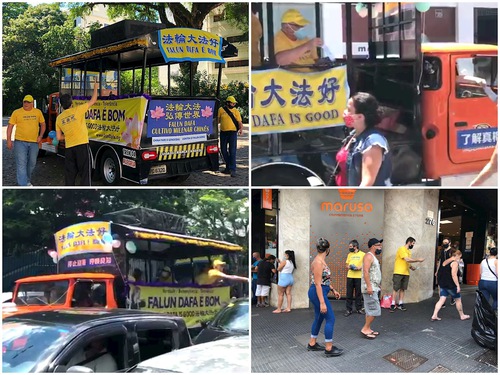 The Falun Dafa float travelled through the city center, attracting the attention from people in vehicles and pedestrians.

The float attracted the attention of many people, both Brazilians and Chinese, as it passed by. People took photos the float and some even chased after the float while taking videos. Some people listened to the information broadcast from the float and came to ask practitioners for flyers.

When the float passed the wholesale market that is frequented by many Chinese people, practitioners handed the Chinese who were running the stalls copies of the Nine Commentaries on the Communist Party and a weekly Minghui publication.

Brazilian Falun Dafa practitioners hope that more people throughout the world can learn about and benefit from Falun Dafa.

“Heilongjiang Woman Sentenced the Second Time for Her Faith”