Mr. Kwok Cheuk-kin, who is well known for his judicial activism, said that this attempt to sabotage practitioners only exposes the CCP’s fear of truth. The Falun Dafa Association of Hong Kong condemned the CCP’s repeated crimes and called on Hong Kong authorities and citizens to safeguard freedom of speech. 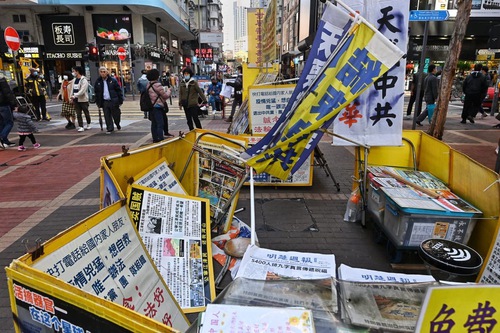 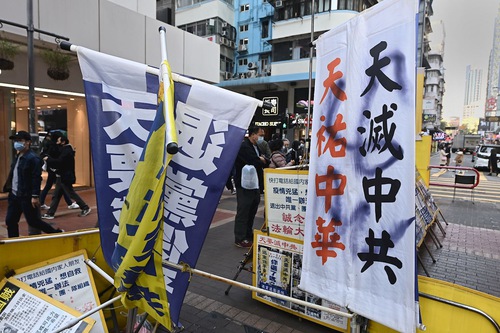 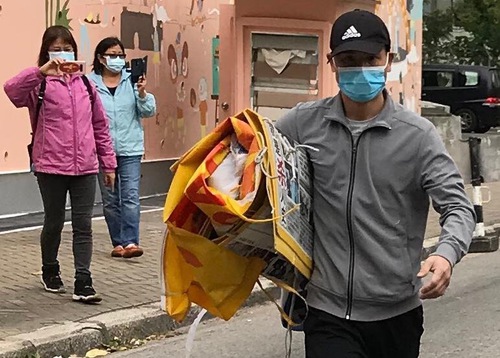 This man wearing a mask and a cap vandalized several information booths in Wong Tai Sin and other places. His two companions photographed him on December 19.

After someone knocked down the Falun Dafa display boards in front of SOGO at Causeway Bay around noon on December 19, 2020, they ran away. Similar vandalism happened a month ago. On the afternoon of December 19, a man whose face was covered with a mask and wearing a cap aggressively destroyed the Falun Dafa displays and took the banners at the booth in the Wong Tai Sin District. Mr. Zhuang, the Falun Dafa practitioner at the booth, recorded a video of the destruction. At the same time, several women with mainland Chinese accents who are members of the “Hong Kong Youth Care Association” (HKYCA), a Hong Kong-based CCP agency that persecutes Falun Dafa, verbally abused Mr. Zhuang. 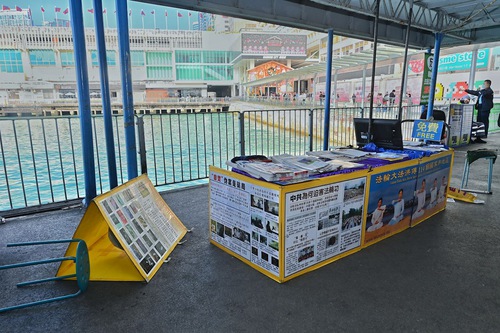 Falun Dafa display boards in Tsim Sha Tsui were knocked down, and some were thrown into the sea on December 20, 2020. 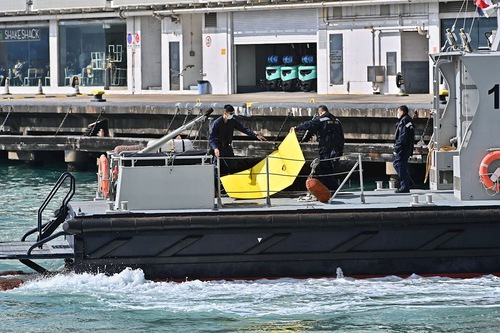 The police retrieved the display boards from the sea.

A thug knocked down the display boards in Tsim Sha Tsui on December 20 and threw some boards into the sea. He approached Falun Dafa practitioner Ms. Chen, who was holding her pushcart which had a TV in it. The assailant pulled out one of the banner poles from the cart and broke it. Then he pulled out the other pole and threw it into the sea. 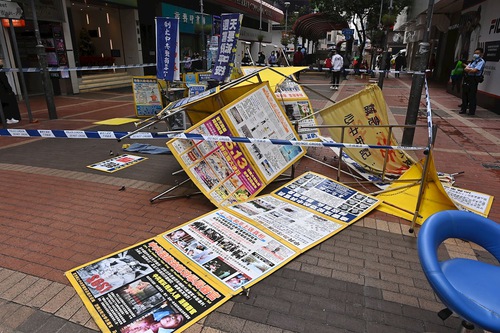 The Falun Dafa information booth on Soy Street was vandalized on December 13, 2020

Ms. Shi, a Falun Dafa practitioner who witnessed the vandalism on Soy Street, said, “A man who looked like he was in his 30s came over. Without saying a word, he kicked the display boards and smashed the booth.” When Ms. Shi took out her cell phone to take photos, the man ran away. Shi reported it to the police, who blocked the site with caution tape. The booth on Argyle Street was also destroyed.

The Falun Dafa information booth in Mong Kok was vandalized in August 2020. On August 24, two concerned local residents caught a perpetrator and turned him into the police. He was charged with criminal offenses.

Liang Zhen, president of the Falun Dafa Association of Hong Kong, condemned the CCP thugs and called on Hong Kong police and citizens to safeguard freedom of speech. 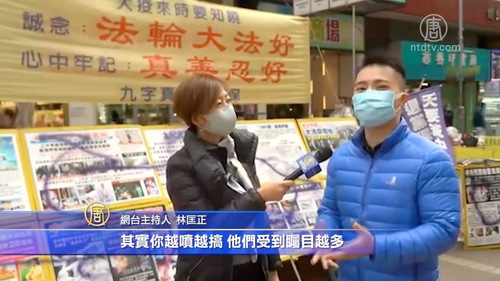 Writer and commentator Mr. Bruce Lam Hong Ching said that he's seen Falun Dafa information booths since he was young. “The more the CCP sabotages their efforts, the more the public's attention is drawn to Falun Dafa,” he said. 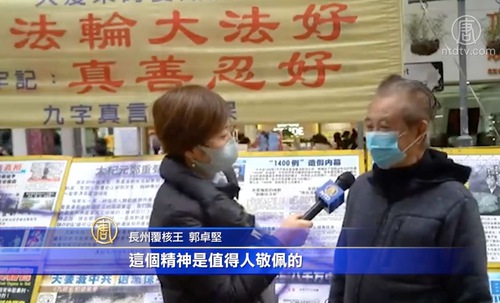 Mr. Kwok Cheuk-kin, whose nickname is “king of judicial review”, said that the Falun Dafa booths have a legal right to be on the streets according to Article 26 of the Basic Law, but the CCP doesn’t want people to find out about the persecution. Mr. Kwok called on people to report these crimes to the police and help stop them, and safeguard freedom of speech in Hong Kong.

Kwok praised practitioners, “Falun Dafa practitioners have shown admirable spirit in upholding freedom of belief, even though they have been suppressed for many years!”

Some people left messages online, calling for supporters of the Anti-Extradition Law Movement to check on the Falun Dafa booths in Mong Kok when they have a chance to and do their best to help (stop the sabotage). 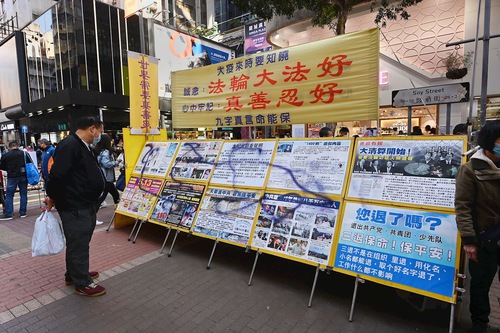 The recent wave of vandalism has caused people to pay more attention to Falun Dafa. 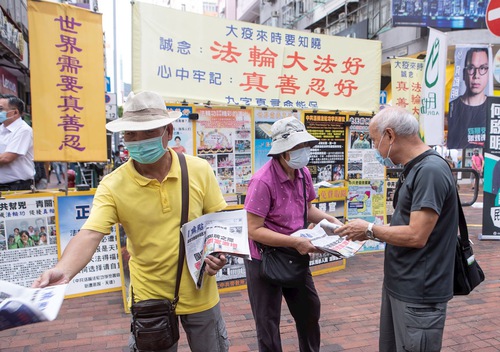 Despite the CCP's implementation of the National Security Law in Hong Kong, Falun Dafa practitioners continue to clarify the truth.

“Trump: “To Protect The Integrity of Your Sacred Right To Vote””