(Minghui.org) According to information received by Minghui.org, at least 499 Falun Gong practitioners in Jilin Province have died as a result of the persecution of their faith over the past two decades. Falun Gong, also called Falun Dafa, is an ancient meditation practice that has been persecuted by the Chinese communist regime since 1999.

Sixty-one percent of the practitioners were once detained and the others (39%) faced ongoing harassment from the authorities for refusing to renounce their belief. Many of the detained practitioners were relentlessly tortured, and large numbers were injected with drugs that damage the central nervous system.

The confirmed 499 death cases occurred in nine cities across Jilin Province. Changchun City, where Falun Gong was first taught to the public in May 1992, has the most cases, at 167. Combined with 137 cases in the provincial capital, Jilin City, the two cities accounted for 61 percent of the total deaths in the province. The numbers of deaths in other cities are as follows: 44 in Yanbian, 35 in Baishan, 34 in Siping, 34 in Tonghua, 22 in Songyuan, 19 in Liaoyuan, and 7 in Beicheng.

Because of the information blockade and the resulting difficulty in getting information out of China, the confirmed number of deaths is believed to only represent a portion of those who have died in the persecution so far. 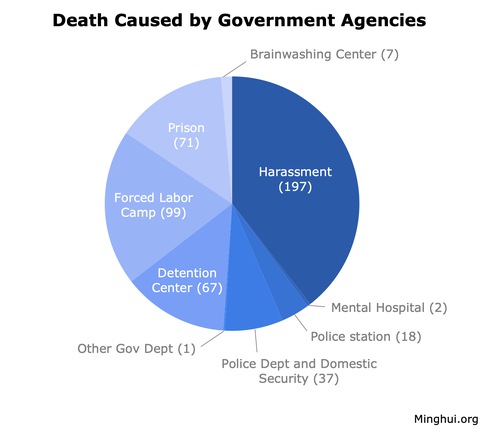 The following is an overview of the causes of death as perpetrated by government authorities and government agencies.

Agents from the 610 Office, police officers and government officials constantly went to the practitioners’ homes to harass them in order to prevent them from regularly studying the Falun Gong teachings and doing the Falun Gong exercises. Many of these practitioners had already sustained physical and mental trauma while they were detained or imprisoned. Without being able to do the exercises, they had no means to regain their health. Some of the practitioners’ chronic or terminal illnesses that disappeared because of their practice of Falun Gong relapsed. There were also practitioners who fled trying to avoid persecution. Many of them subsequently died as a result of the stress and deprivations of living away from home.

After the practitioners were sent to the various detention facilities, guards viciously beat them, tortured them, or injected them with unknown drugs. Often, when the practitioners were at the brink of death, in order to shirk responsibility, the authorities had their families come pick them up or they released them in the name of “medical bail” or “bail awaiting trial.” Many practitioners died shortly after they got home.

Oftentimes the medical professionals in the mental hospitals injected or fed the practitioners with nerve-damaging drugs. These once healthy practitioners either died on the premises, or became mentally disoriented. Some were sent home to die.

When practitioners were tried in courts, the court officials harassed and abused them, which eventually led to their death.

1. Ms. Zhao Fengying Dies After Being Detained and Fined by County Government

Ms. Zhao Fengying was a practitioner from Wangjia Village, Fuyu County. In March 2000, she went to Beijing to appeal for her right to practice Falun Gong. She was illegally detained for 15 days and fined 5,300 yuan by the county government. Ms. Zhao was traumatized by the persecution. She died of a heart attack in July 2001 at the age of 38.

Ms. Wu Lianjie lived in Baicheng City. She was tortured in Jilin Women’s Forced Labor Camp with two other practitioners, Ms. Wang Yuhuan and Ms. Man Qiujun, from May to October 2000.

On the night of August 19, 2001, Ms. Wu was distributing Falun Gong literature in Gongzhuling City, when several officers arrested her and took her to the Gongzhuling Public Security Bureau. She died the next day on August 20. She was in her 50s. The police claimed that she committed suicide by jumping from the building.

An insider disclosed that when Ms. Wu was falling from the fifth floor on the early morning of August 20, 2001, someone looked down from upstairs but didn't show any surprise in his facial expression. Experts analyzing the situation suspect that the police probably beat Wu Lianjie to death or to near death and then, in order to shirk responsibility, they threw her from the fifth floor so as to make it look like suicide. Her case is pending further investigation.

Ms. Li Jing was a 21-year-old student at the Jilin Province Professional Business College. She had been detained many times in 1999 for going to Beijing to appeal for justice for Falun Gong.

On October 31, 2000, officers from the Changchun City Public Security Bureau sent Ms. Li to a labor camp to serve a three-year term. She was released early in 2001.

Changchun City policemen Li Haifeng and Li Zhuji from the Xi'an Square Police Station brought her from Qiqihar City in Heilongjiang Province to Changchun City in Jilin Province on October 11, 2001. Her young life ended at a location 80 kilometers (about 50 miles) from Qiqihar City. The police claimed that Li Jing died from jumping out of the train, but her family suspected that she was tortured to death.

Mr. Liu Chengjun lived in Changchun City. On March 5, 2002, he and several other practitioners tapped into the city’s cable TV network and successfully broadcast a program about the true story of Falun Gong in Changchun and Songyuan for about 50 minutes, reaching more than 100,000 viewers. This courageous feat to expose the persecution was later dramatized in the film, Eternal Fifty Minutes.

The Chinese Communist Party was enraged by this act and began to hunt down Falun Gong practitioners on a large scale.

Mr. Liu was arrested on March 24. The police shot him in the legs, badly injuring him. He was placed in the Jilin Province Hospital, handcuffed to his bed. The authorities later put shackles on him because he refused to talk to the reporters, knowing that they would edit and twist anything he said into propaganda against him and Falun Gong.

Mr. Liu was sentenced to 19 years in prison on September 18, 2002, and transferred to Jilin Prison.

The guards beat Mr. Liu with thick wooden bed planks, causing his hips and buttocks to bleed. His shorts were stained with blood and stuck to his skin and could not be removed. They broke several planks during the beating. An inmate lashed him with a leather belt. The belt hit his face and eyes, causing extensive bleeding.

The guards forced Mr. Liu to sit still on his bed from 4:30 a.m. to 7:30 p.m. every day with short breaks for food and toilet use. He could barely talk from the torture and abuse. At one point, the authorities rushed him to Jilin Central Hospital for emergency treatment. The doctor issued a critical illness notification. Despite his precarious condition, agents from the 610 Office insisted on transferring him to the Jilin Public Security Hospital.

Ms. Wang Fengyue lived in Baishan City. Gong Shishun from the Quanyang Forestry Bureau and a police officer from the Dongbeichalinchang Police Station ransacked Ms. Wang’s home in October 1998, one year before the persecution was “officially” launched.

These authorities returned to her home several times after the persecution started in July 1999. Her husband Mr. Chen Jungong, also a Falun Gong practitioner, died a few months into the persecution.

After the husband’s death, the harassment intensified. The authorities searched and ransacked Ms. Wang's place almost every other day. She was forced to leave home to avoid the ongoing harassment. She died on July 16, 2004.

Ms. Liu Boyi was a resident of Yanji City. She suffered ongoing torture from the end of 2003 up until 2004, when she finally died. Her husband had divorced her, leaving her with a child.

Ms. Liu Boyi's older brother helped the head of the 610 Office, Xiao Bin (male), to arrest her and detain her in the Yanji City Mental Hospital for two years. She was given various unknown drugs and was finally released when she became very weak. At that time, Ms. Liu said to her brother, “Brother, I do not have any mental illness. You should not cooperate with the wicked policemen to torture me.” One month after she arrived back home, Ms. Liu was arrested again by agents from the 610 Office and was tortured to death at the age of 43.

Mr. Liu Yongqi from Baishan City was put in Chaoyanggou Forced Labor Camp on December 10, 2004. Many people heard him shouting “Falun Dafa is good!” loudly as soon as he entered the labor camp that night.

He died from the consequences of brutal torture on December 13, 2004, the third day after he was taken into custody. His body was carried out of the labor camp. The labor camp authorities blocked any information regarding his death.

Officers from the Yangguang Police Station arrested Ms. Liang Xiaoguang in Siping City on May 26, 2012. The police took her keys and, without her knowing, ransacked her home and took her Falun Gong items. While at her home, they interrogated her husband and younger brother.

Ms. Liang was sent to the Siping Detention Center and denied family visits. The Siping Court sentenced her to six years without informing her family. She refused to sign the court documents, and filed an appeal.

Ms. Liang was sent to the First People’s Hospital. Four days later on November 23, 2012, her family received a notification from the Siping Detention Center claiming that she died from “lung cancer” and her body had already been taken to the crematory.

On July 3, 2013, deputy director of the Siping Detention Center, Wang Haibo visited Ms. Liang’s husband and demanded that he sign a mandatory cremation notification. He said that her body would be cremated within 15 days, regardless of her family's consent. Feeling helpless and in an extremely traumatized physical and mental state, her husband acquiesced and signed the notification.

Mr. Wang Haitian, from Mongolia, also went by the name of Bao Wenju. He operated a delicatessen in Jilin City. He was arrested on October 18, 2013, outside of his home. Officers from the Jilin Police Department and Zhihe Police Station took him to the Shahezi Brainwashing Center.

After he was released from the Shahezi Brainwashing Center on December 5, 2013, Mr. Wang's health deteriorated rapidly. He suffered breathing difficulty, a severely swollen abdomen, and constipation. He died within two months of his release, on February 2, 2014, at the age of 45.

Small black particles about the size of grains of rice were found in his ashes. Family members suspect that he had been injected with harmful drugs.

According to his family, he was tortured in the brainwashing center, including being force-fed with chili pepper water and mustard oil through his nose and having burning cigarettes inserted into his nostrils. The police had once threatened to remove his corneas.

10. Ms. Tian Yumei Dies after Being Visited by Court Clerks

The police in Taocheng City, Baicheng, arrested and detained Ms. Tian Yumei many times. Her health deteriorated after the torture in the detention center.

Ms. Tian fell and broke her left hip in the winter of 2016. She couldn't move due to her injury. The police forced her husband to write a statement to frame Falun Gong and grabbed her hand to press her fingerprints on it.

The local court sent a judge to Ms. Tian's home and sentenced her to one year in prison with one year of probation, from December 16, 2016 to December 15, 2017. She was ordered to submit a monthly “thought report” during her probation.

Her husband, who didn't want her to suffer further persecution, wrote 12 reports on her behalf and sent them in all at once without her knowledge.

Two court clerks showed up at her home in October 2017 to check if she still practiced Falun Gong. At the time she was on the verge of death. Days later, on October 28, 2017, her heart suddenly stopped and she lost consciousness. Her two daughters rushed her to a hospital, where she died 30 minutes later. She was 66.

Falun Gong practitioners Who Passed Away in the Persecution

“Stepping Up and Fulfilling My Responsibilities”