(Minghui.org) Australians from all walks of life gathered at Martin Place in Sydney's Central Business District on December 10, 2020, to hold a rally in support of Chinese people who have quit the Chinese Communist Party (CCP) and to call on people all around the world to resist the CCP's infiltration and end its tyranny. 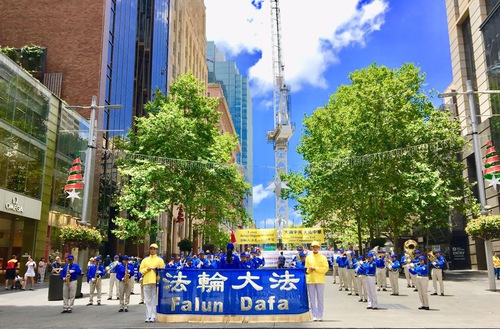 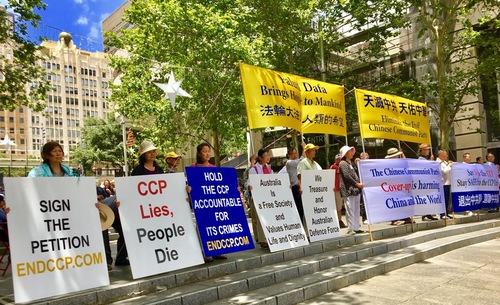 Australians from all walks of life hold a rally to support the quit the CCP movement and to call for an end to the CCP's tyranny. 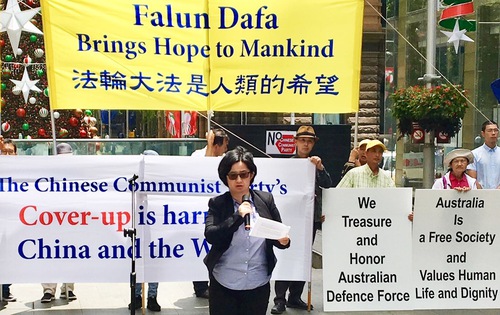 Joanna Zhou, a representative from the Sydney Quit the CCP center

Joanna Zhou, a representative from the Sydney Quit the CCP center, spoke at the rally. She said the CCP forced the majority of Chinese people to become members of the CCP and its affiliated youth organizations, and forced these people to make a vow to sacrifice their lives to fight for the CCP. Overseas, the regime has attempted to coerce Western society to give in to it through economic incentives and disincentives. She said that the CCP has brought tremendous hardships to people all around the world. Now, everyone must choose whether to go along with the CCP or reject it. 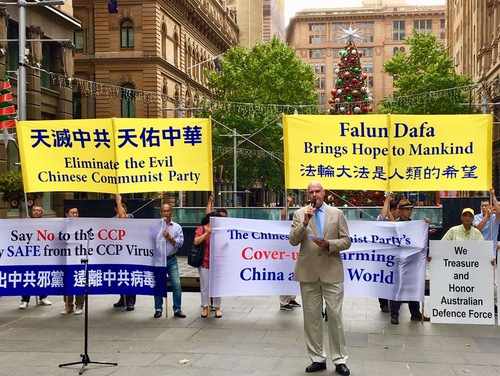 John Deller, spokesperson for the Falun Dafa Association in Australia, said Falun Gong practitioners have been helping people see the evil nature of the CCP.

Spokesperson for the Falun Dafa Association in Australia John Deller said, “The CCP’s purpose in destroying traditional Chinese culture and various faith groups is to destroy the spiritual connection between mankind and God.”

“The Quit the CCP movement is awakening the conscience of Chinese citizens. When you are choosing between good and evil, you can use any means to support disintegrating the CCP. This is the best way to protect Australians and those who are suffering hardships caused by the CCP’s tyranny in China.”

Member of Parliament Sends a Letter to Express Support 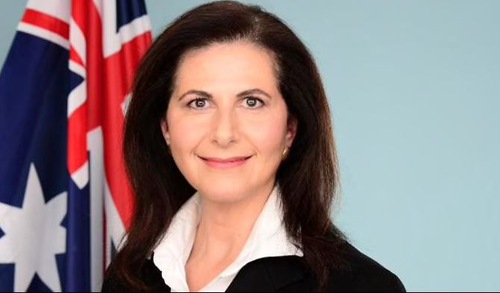 Liberal Senator the Honorable Concetta Fierravanti-Wells sent a letter expressing her support for the rally.

Liberal Senator the Honorable Concetta Fierravanti-Wells sent a letter on the day of the rally expressing her support. She wrote in her letter: “We must support the Quit the CCP organization as well as the efforts of those promoting freedom and democracy.”

In her letter she pointed out that the CCP is a communist regime with different values and beliefs than Australia.

“In Australia, we saw the evil actions of those loyal to Beijing. We know that these organizations are spreading fear and turmoil. The National Security Act was recently passed in Hong Kong, exacerbating this fear. Clearly this law is not only effective in Hong Kong, it’s aim is to threaten people overseas criticizing Beijing. Nevertheless, I urge you to overcome this fear, stand out to fight for democracy and freedom.”

She also wrote that this is the most important moment for all Australians and called on people to keep up the efforts to resist the CCP’s infiltration, not only in Australia but worldwide. 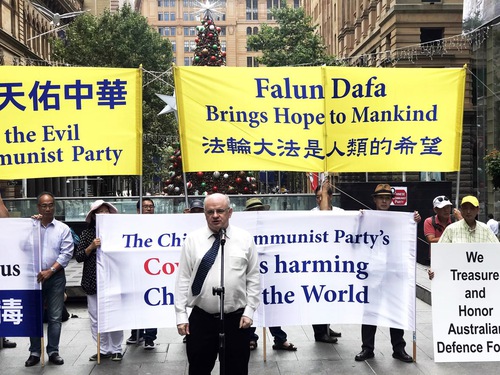 Parramatta City Councilor Andrew Wilson said: “The Australian government has been trading with the CCP for many years and has been afraid to stop its human rights abuses.”

He called on people to write to their Member of Parliament and tell him or her that the CCP’s roguish behavior overseas must be stopped.

“If the whole world unites to sanction the CCP, it will not dare to do evil things. Australians must bravely tell their Member of Parliament, family and friends, the CCP cannot continue to do evil in our country,” he said.

General Manager at Australian TFP: The CCP Is a Criminal Organization 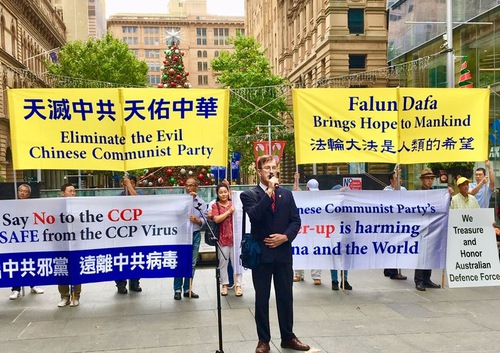 “Seventy-two years ago, the world witnessed the Nazi’s brutal persecution of the Jews in concentration camps during World War II. The world human rights law was thus created so that the same human rights calamity will not happen again. But today the evil demon CCP is persecuting its people using even more terrible means, removing organs without consent and selling them for a profit. This crime has been validated through various evidence. Therefore the CCP is a criminal organization,” Mr. Folley said.

“Many politicians and people choose silence and indifference in the face of the CCP’s debauchery. This is a disgrace for humanity. If the whole world came together to stand up against the CCP, it will be destroyed very soon,” he said.

The CCP Is the Greatest Threat to Humanity 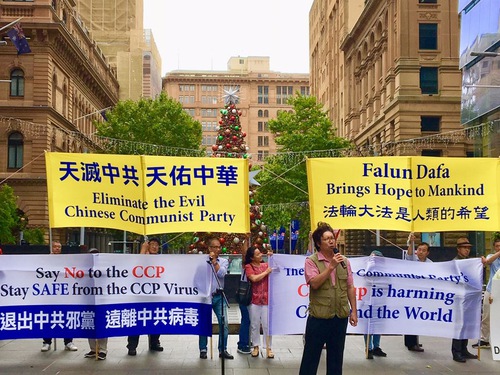 Mr. Pan Qing, a representative of the Sydney branch of the Federation for a Democratic China, speaks at the rally.

Representative from the Sydney branch of the Federation for a Democratic China Mr. Pan Qing said the CCP is the greatest threat to humanity.

“The CCP is a sick virus, just like the virus that has spread globally and endangered countless people. It is silent and colorless, yet it is highly infectious and deceptive. It is very good at disguising itself. We must be on our guard and get people around us to act together, expose its evil nature and completely bury this poisonous tumor – the CCP and the CCP virus,” he said.

Human Rights Activist: The CCP Is Endangering the Whole World 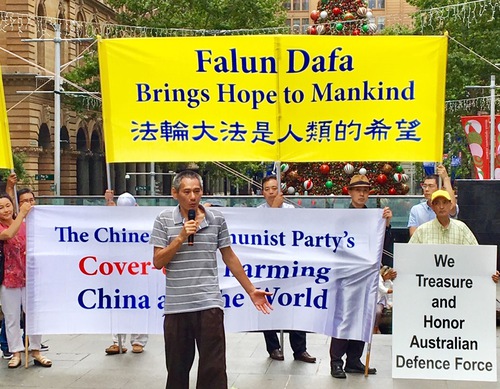 Human rights activist Mr. Zhang Xiaogang said that over the years many people in the Western world have held illusions about the CCP and done business with it. Therefore, when the CCP massacred students on Tiananmen Square, persecuted Falun Gong practitioners, Tibetans, Ugyhurs and Hong Kong citizens, these people looked away. But now the CCP has revealed its true colors and endangered the whole world.

“Not only should all Western countries say no to the CCP, they need to join forces in rejecting the regime, just like getting rid of the CCP virus,” he said.

We Must Act to Eliminate the CCP 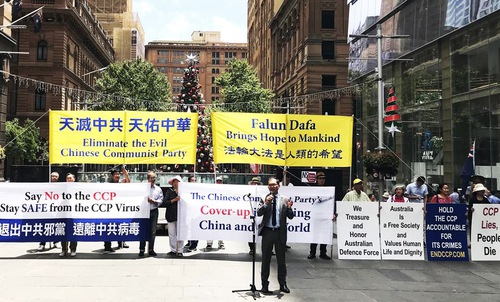 Chairman of the Vietnamese Community NSW Chapter Paul Huy Nguyen said: “It is not enough to simply censure the CCP. We must act to eliminate it. At present, all of us have a clear understanding. Australians are working with us to stand up against the CCP’s pervasive infiltration and bribery. Only by taking it down can the whole world truly enjoy freedom and democracy.” 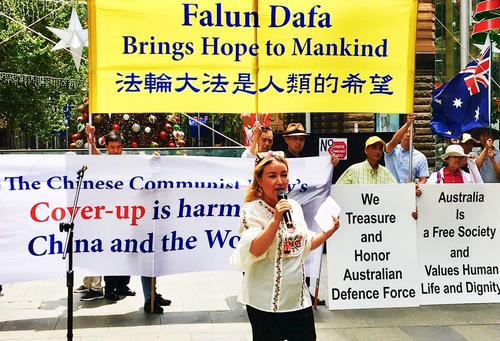 Uighur poet and activist Fatimah Abdulghafur spoke at the rally on behalf of an Australian Xinjiang women’s organization. She told the story of how her family members and many Chinese nationals were tortured and murdered by the CCP. She said that the CCP has also infiltrated every corner of the world. She urged Australians to act quickly to bring its downfall.

“If you don’t do anything now, what I went through today will happen to you tomorrow,” she said.

People Are Awakening, the CCP Will Be Overthrown 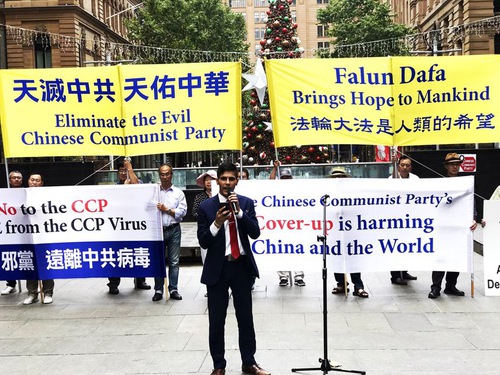 Human rights activist Samraat Joshua Grewal spoke at the rally. “China is the most resilient nation with thousands of years of culture. But in less than a century, the CCP has destroyed its culture, honor, and reputation. We know the distinction between the Chinese race and the CCP’s autocratic rule,” he said.

He praised Falun Gong practitioners for exposing the CCP’s brutal persecution, saying the CCP is evil and lies.

“2021 is the beginning of a new era. People are awakening and the CCP will be overthrown soon. God’s judgment will fall on the CCP. Those who stand on its side, and oppose god, will collapse with the wall. The noble justice has come,” he said.

Many people stopped to watch the rally that day. Many acknowledged Falun Gong's universal values of “Truthfulness, Compassion and Forbearance” and expressed their support for disintegrating the CCP. 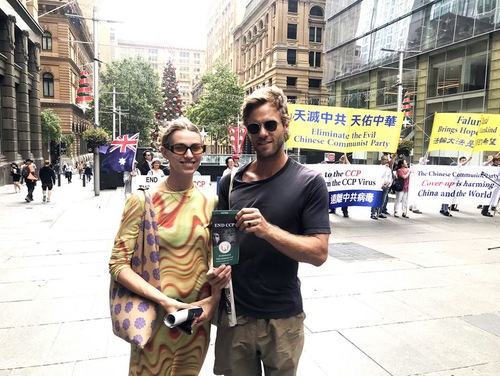 Drew Wheeler said he agrees with Falun Gong's universal values of Truthfulness, Compassion and Forbearance and hopes the CCP will fall soon.

“I learned about organ harvesting from the Internet. I think the CCP is a murderous demon, trampling basic human rights. The pandemic was caused by the regime’s lies and cover up. If everyone in the world understands this important truth, then they will call for its disintegration,” he said. 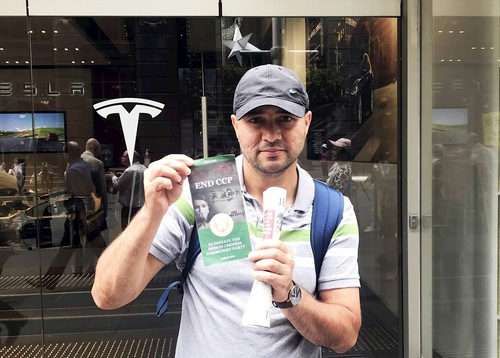 Erfa Moheng said that the CCP is very malicious in killing Falun Gong adherents for their belief, but he thinks good will triumph over evil in the end. The CCP will disintegrate rapidly, just like the Soviet Union. 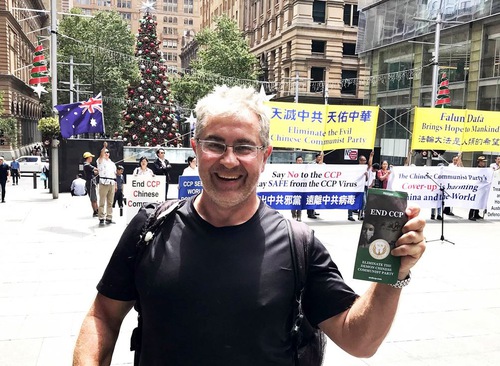 Geoffrey said truth has immense power and can expel evil. “The US is wise in imposing strict sanctions on the CCP. The regime’s crimes must be exposed. The whole world should come together to stand up against it courageously,” he said.

“My Son Changed His Attitude as Soon as I Looked Inward”