(Minghui.org) In an interview with The Epoch Times on December 20, 2020, prominent American lawyer Lin Wood exposed the Chinese Communist Party (CCP)'s control of the United States through infiltration. He advised people to reflect, pray during the Christmas season on the founding principles of the United States and let the country reclaim its foundation as a nation under God. 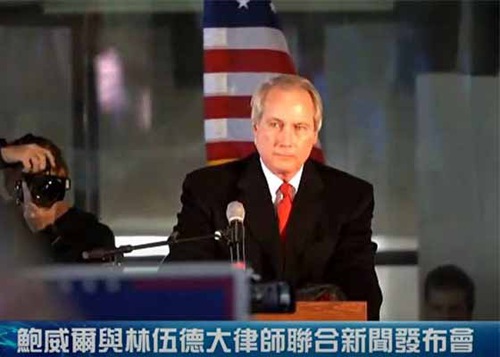 Since the general election on November 3, Lin Wood has been very vocal about election fraud and calling on people to fight for the truth and traditional American values.

In a series of tweets on December 20, 2020, he said: “America has been asleep at the switch. We have forgotten about the extent of communism in our country at the time of Sen. Joe McCarthy hearings in 50’s. We forgot that we were fighting Communism in Korean War & Vietnam War with our adversaries armed by Communist China. Then we were distracted by Middle East after Henry Kissinger opened doors of our country to China in 70’s. As Americans we sought peace. CCP sought control.”

In another tweet, he said: “CCP is evil. They want to destroy us, our way of life, and our freedom. CCP is the devil. Too many Americans have made deals with the devil. Donald Trump wakes us up by running for president.”

In an interview with The Epoch Times on the same day, he said that China (the Communist Party) attacked our country with a virus and also interfered with our country’s election. Fraud has been uncovered across the country, especially in swing states. Courts must open their eyes and have the courage to put aside personal interests and defend the truth. He called on officials and judges to simply follow the law, or the country will lose its freedom.

He said that the Chinese Communist Party has infiltrated the U.S. government, both parties in Congress, even people who work for the president, and the judiciary branch. Many of the people affected have been bribed and threatened by the CCP. They are being blackmailed because they got caught in a situation documented by the CCP, which in turn uses that type of extortion to control them.

He explained in his tweets: “Communism infiltrates by ideology, by corruption/money & by extortion. Common tactic of CCP is to arrange liaisons with drunk American visitors which are taped. So many ways to control the unaware.”

Lin Wood tweeted that the war against communism will be won if the American people fight back and support President Trump. “We will fight along side of our President because Americans are born with spirit of freedom.”

“Trump knows Communism. He has been fighting it for 4 years to defeat it & cleanse our country of its evil.”

He also tweeted: “2020 was not an election between competing candidates. 2020 was a referendum on our future way of life. Do you see more clearly now almost 12 months into 2020? For our country, I pray you do."

In the interview with the Epoch Times, he stated that he admired Martin Luther King’s non-violent civil rights movement and he also said we should work to prevent the CCP from taking control of the United States.

He said that if we don’t stand up and fight for freedom now, the U.S. will become the next China and a globalist country. Then maybe the CCP will be telling the Americans how to live their lives and no one would represent the people anymore.

He compared the current situation in the U.S. to the year 1776, when the Declaration of Independence was written. He said that now is 1776 again and the American people have to make a choice, a choice for freedom, individual rights, and for our future generations to live as free people. Everything that the U.S. is doing will affect the world because the U.S. has long been considered the beacon of light that lights up the world. If the American light goes out, the whole world will be left in darkness.

Reflect and Pray During This Special Christmas Season

When talking about Christmas, Lin Wood said, “This is not going to be the normal Christmas. This was not a normal election. But I do hope this Christmas people will reflect back on what our country is all here in America. We’re a nation founded under God and we needed to get back to that principle. I would like to think this Christmas maybe for the first time, in many, many Christmases, people will know that it’s not about bright lights, exchanging pretty presents and partying, maybe they should get back to remember what Christmas is all about – it’s about the birth of Jesus Christ, son of God.”

Lin Wood also said that there are more people praying to God now and only God can save this country. “From the spiritual standpoint, we are in the second harvest. I think God is going to show us in the next several weeks he is real again and I believe our country will go back to where it started – a nation under God. We are going to care more about each other, and less about money, fame, and fortune.

“So this is a special Christmas I believe in this world and I believe this is a special Christmas for America. And I believe in every bone and my fiber, I believe God will save this country. He is a God of second chances. Our country is getting so corrupt. But I think he is going to give us a second chance. And I hope and pray that Americans take advantage of it. Seek forgiveness and correct its way, and get rid of all the corruption and greed in our government and in our business world.”