(Minghui.org) Eight residents in Xinbin County, Fushun City were recently confirmed to have lost their lives to the persecution of their faith in Falun Gong. The three men and five women, including a married couple, were all over 50 years old. Three of them died in 2018, two in 2016, and one in each of 2014, 2010, and 2005.

Falun Gong, also known as Falun Dafa, is a spiritual and meditation discipline that has been relentlessly persecuted by the Chinese communist regime in the past 21 years.

Ms. Sun Changli Loses Her Eyesight After Repeated Strikes to the Head

For delivering Falun Gong informational materials to the deputy chief of Hongmiaozi Township after the persecution started in 1999, Ms. Sun Changli was reported and arrested on the next day. She went on a hunger strike after the police put her in Xinbin County Detention Center.

While she was detained, the local police chief many times threatened her husband's safety and job security when he refused to persuade her to renounce her belief. The police extorted thousands of yuan from him.

Ms. Sun was arbitrarily given three years in Wujiabaozi Forced Labor Camp after spending over 50 days in the detention center. One evening in December 2001, several guards tried to make her write articles criticizing Falun Gong. They put her in the position of “flying an airplane” for extended periods of time. She suffered extreme pain. 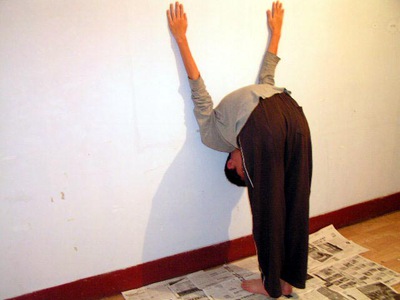 Torture reenactment: Flying an airplane. The victim is forced to bend his body towards his legs and raise his arms behind his back.

A captain, Wu Wei, and 20 guards kicked and beat her with a wooden plate. One of them grabbed her hair and slammed her head into the wall, the ceramic floor, and the table. One slapped her in the face repeatedly until her head was swollen and distorted. As a result of the head trauma, Ms. Sun's eyes became permanently blind.

In fall 2002, not long after Ms. Sun was released, she was arrested again and given another three years at the notorious Masanjia Forced Labor Camp. After the labor camp rejected her admission due to her eye problem, the police deceived her family into paying a 4,000 yuan bail bond. Although they promised to return the money after Ms. Sun’s term expired, they said to Ms. Sun’s family “you can forget about getting the money back” when they went to ask for the money three years later.

Ms. Liu Hui went to Beijing to speak up for Falun Gong three times after the persecution started. She was arrested and put in Fushun Forced Labor Camp for three years.

The police in Xinbin Town arrested her in June 2001 and extorted 200 yuan from her. She was arrested again in December 2002 and extorted 1,000 yuan.

The police tapped into practitioner Mr. Chen Jiuwen's home phone before the 2008 Olympics. Those whom he spoke to on the phone, practitioner or not, were either arrested, fined, detained, or sentenced. Ms. Liu was one of them. She spent 17 days in Xinbin County Detention Center and paid a 3,000 yuan fine.

In November 2008 the police took her to Masanjia Forced Labor Camp. The labor camp authorities refused to take her because of her severe hypertension.

The police came back to harass her in March 2010.

The police in Yushu Township arrested Ms. Liu Xiulan and kept her in Yushu Police Station overnight one day in 2000. Her family had to pay 6,000 yuan to bring her home.

She was arrested in late 2001 after being reported for distributing Falun Gong materials. She held a hunger strike at the Xinbin County Detention Center and was then released.

Ms. Liu, then in her 60s, went to Beijing to protest against the persecution of Falun Gong in February 2002. The police arrested and arbitrarily gave her three years in Masanjia Forced Labor Camp in Shenyang City. Her family was asked to pay for the travel expense of officers who went to Beijing to take her back. She was released after suffering over two years of torture.

After the persecution started, Mr. Wan Changwen twice went to Beijing to protest the persecution. His leather jacket worth 1,000 yuan and 800 yuan in cash were confiscated. He was then put in Fushun City Forced Labor Camp for three years.

A guard stripped Mr. Wan and had other inmates step on his hands and legs. The guard repeated hit him with a wooden board. His body later became so swollen he couldn't put his clothes back on. Another time a guard ordered an inmate to hit the back of his head with a steel toe boot. The inmate struck him hundreds of times.

Mr. Wan was arrested again in 2002 and put in a forced labor camp for three years. He was extorted 20,000 yuan when he was released.

Mr. Li Feng and his wife Ms. Liu Mingzhen were arrested after being reported for hanging up a Falun Gong banner on January 25, 2003. They were detained in Xinbin Detention Center and denied family visits. The police took 10,000 yuan from their family before releasing Ms. Liu, only to arrest her again and put her in Masanjia Forced Labor Camp for three years.

Mr. Li was transferred from the detention center to Wujiabao Forced Labor Camp in 2003 to serve a two-year term. He was relentlessly tortured and suffered tremendous trauma. He was released in October 2004 for medical bail and died on June 17, 2005, at the age of 65.

The local police arrested Ms. Liu again in April 2014. Her health declined while she was detained and interrogated. She died in July 2018 at the age of 68.

Ms. Pei Dongzhi went to Beijing to tell the government why the persecution was wrong. The Beijing police arrested her on October 15, 1999. A female officer searched her bag and confiscated her 1,300 yuan in cash. She was transferred home and locked up in Xinbin Detention Center for 25 days. Her husband was extorted 2,000 yuan and she was fined another 1,500 yuan.

Five policemen went to Ms. Pei's home on March 18, 2003 and ransacked her place. They arrested her and sent her to Nangou Detention Center in handcuffs and shackles. The 500 yuan in cash she had was taken away by two officers. After 25 days of detention, she was transferred to Masanjia Forced Labor Camp, where she continued to be tortured for 15 months.

The police in Fushun arrested Ms. Pei and her sister on March 19, 2005 and viciously beat them. Their mother had 600 yuan confiscated from her.

Mr. Yu went to Beijing on July 21, 1999 to protest the persecution, and the police seized him at the Beijing Train Station. He was sent home and detained for three days in Xinbin Detention Center.

Government officials in Pingdingshan Town asked all local practitioners to officially declare whether they would continue practicing Falun Gong. After hearing “yes” from Mr. Yu and other practitioners, the officials put all of them in Fushun Detention Center, where they were subjected to intensive brainwashing. Mr. Yu was released a month later.

Mr. Yu went to Beijing again in November 2001. Before he could get to the Fushun Train Station, he was discovered by the police, who arrested him and sent him to Fushun Forced Labor Camp to serve a 3-year term.

The camp authorities offered rewards to the inmates who could torture Mr. Yu into giving up his faith. The inmates brutally beat him and had him stay in a position where he squatted for a long time with his arms held out horizontally.

Because Mr. Yu refused to give out the names of other practitioners and renounce his faith, the torture worsened, and so did his health. He was eventually released on medical bail.

A group of Xinbin County police and agents from the 610 Office went to Mr. Yu's home to arrest him in May 2005. They claimed that he distributed Falun Gong fliers, despite the fact that at the time, he suffered severe head trauma and had lung cancer. They refused to leave until one of his neighbors came to his rescue.