(Minghui.org) There are many things we can’t control, but we can decide what kind of a person we want to be and how to handle life's challenges. Mr. Xu Wenhai in Taoyuan, Taiwan, recalled what led him to practice Falun Dafa and its positive impact on his life.

The oldest son in a farm family of 10 children, Wenhai shouldered a lot of responsibility both in the field and in his house. “I never got to rest after school. Instead, I worked—transplanting, weeding, harvesting, and taking care of our buffalo. I used to stare up at the sky and think, ‘Life is hard! The gods must live happy lives.’”

Wenhai’s parents started working before dawn and didn’t stop until after sunset. They rarely got a chance to talk with Wenhai, but set a great example with their hardworking, honest, and down-to-earth attitude. Despite the family's tough financial situation Wenhai never gave up his dream of education. He often studied until late at night. By working part-time and paying for school himself, he eventually obtained a university degree.

After being discharged from the military Wenhai passed the national test and worked for an agency under the Ministry of Finance. His hard work and attention to detail won him the top rank in a training class on English writing. He was appointed the headquarters' English language secretary.

Wenhai suffered from insomnia for years. Every night he tossed and turned—all his worries weighed heavily on his mind. He barely fell asleep before he had to get up to go to work. Sleeping pills didn’t help. His temples hurt and his heart pounded heavily. “Even though I was exhausted, I couldn’t fall asleep on the bus during my one-hour commute or during my lunch break. My life became a painful vicious circle,” he recalled.

Worn out by his struggles day in and day out for years, he felt desperate and turned to qigong. “I learned all kinds of qigong and spent tens of thousands of dollars, but it didn’t help. I continued doing qigong exercises with my colleagues during lunch breaks. The colleague who led the exercises eventually stopped coming. She told me on the last day of 1998 that she had found a better practice.”

After his colleague told Wenhai about the better practice, Falun Dafa, he stopped taking all the expensive but not helpful qigong classes. He learned Falun Dafa from this colleague. During the learning process, Wenhai noticed his anxiety and illnesses were resolved. He finally experienced how beautiful life could be!

“Soon after I began practicing Falun Dafa, I easily fell asleep. I woke up in the morning feeling completely rested. I gradually stopped taking any pills. These changes were amazing to me. I could finally sleep and eat well. I was filled with energy and I looked healthy!” Wenhai said.

“After reading the book Zhuan Falun, I realized that what I thought was right is actually wrong. For example, I used to think the more I gained, the better, but the principles of the universe hold that the more you gain, the more you harm others, the more virtue you lose.” He agreed with every sentence in the book about how to be a good person. After his mindset changed, his heart problem, insomnia, gastric ulcer, sinusitis and other illnesses were resolved. He became optimistic and calm. 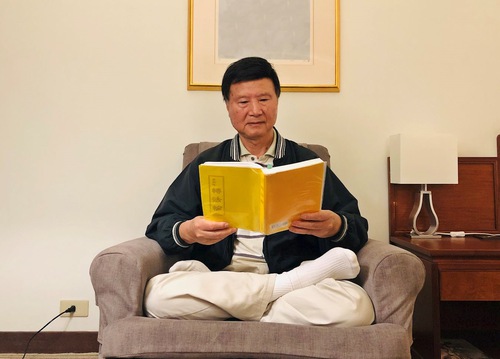 Learning How to Think for Others by Following Falun Dafa's Principles

“I used to be impatient and ill-tempered. After I began practicing I became considerate of others. For example, when my car was hit from behind—I reminded myself that I was a cultivator, and the driver didn’t intentionally hit me. I didn’t even get out of my car to ask for compensation. Such accidents happened several times.”

In Wenhai’s apartment building all the households put their shoe racks outside their doors. Wenhai cleared the space outside his door because he wanted to make room for the others in the hallway. When he parks in the basement of the building, he always parks close to the wall to make room for others.

Wenhai also sets a high standard for himself at work. He doubles and triple-checks his documents to make sure there are no errors. He keeps improving his English skills. Because of his conscientiousness, he was assigned to be an English secretary to the then minister of finance and directors general when they visited other countries or attended international conferences like APEC.

Even though his workload has never lightened, his heart has. His increased capacity also made it possible for him to learn more. “I used to think it wasn’t my job to answer my colleagues’ questions about English. After I started cultivating myself, I treat others’ problems as mine and I sincerely do my best to help them—even though it increases my workload.”

When it comes to bonuses and awards, Wenhai gives what he deserves to others. He asked his colleague to remove his name from the list of people who would get monetary awards for special seizure cases. Many times, he voluntarily gave up his honor of A ranking on the year-end evaluation, so that more of his subordinates could have the opportunity to get Grade A, because the number of people who can get Grade A is limited.

Spreading the Truth Through Media

After the Chinese Communist Party (CCP) launched the persecution in 1999, its propaganda smeared Falun Dafa, blocked people from learning the truth, and incited hatred towards the spiritual practice. Overseas practitioners started their own media to counter the CCP’s propaganda. Wenhai helps with this.

Wenhai has written and translated over 1,000 articles for practitioners’ news media. He said, “I feel working on articles is a cultivation opportunity. I search for the best words to make each article more meaningful and touching. Sometimes I spend 30 minutes or more on the correct translation of a word or an expression. Some revisions take an entire day or week. It’s a lot of hard work, but thinking of the billions of non-Chinese speakers who need to learn the truth, I overcome any difficulty with righteous thoughts.”

In order to enhance the content of his articles, Wenhai taught himself photography and film editing. He downloaded the free software and taught himself how to edit the film and how to add captions and music. Even though he's in his 70s, Wenhai has sharp vision and good hearing and can easily use either hand to control the mouse. “After repeating the same dragging and clicking motions for hours, my elbows and fingers became so sore that I could not sleep. I had to switch and use my left hand; then I switched to the middle finger when my index finger hurt too badly. I can now use my thumbs, ring fingers, and even my little fingers.”

After cultivating himself for 22 years, Wenhai has experienced the wonderful feeling of letting go of attachments—the beauty of a pure mind and great health, and the freedom of an uplifted spirit. He realizes that in order to help more people, he needs to continuously enlarge his capacity and sharpen his skills. He said, “I know that my writing, translating, and editing abilities all come from the wisdom given to me by Master Li (the founder) and Dafa. I have these skills so I can help more people learn the truth and choose a bright future at this pivotal moment in history. I’m deeply grateful to Master!”