(Minghui.org) A number of Republican lawmakers held a press conference in Phoenix, Arizona at 5 p.m. eastern time on December 7, 2020, demanding a full investigation of election fraud and decertification of Arizona’s 2020 presidential election results. After the press conference, there was a rally calling to “stop the steal.” The organizers called on people to pray for the country and support President Trump. 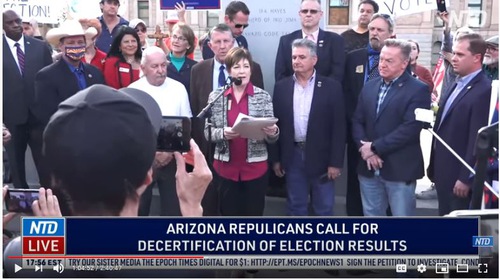 Screenshot of the Arizona press conference

Prior to the press conference, the Arizona House Speaker announced the closure of the State Assembly for a week on Sunday, on the grounds that Trump lawyer Rudy Giuliani tested positive to the Coronavirus. Giuliani appeared in a hearing held by nine state representatives on November 30. Another Trump lawyer, Jenna Ellis, said that the team's work will not be affected and they will continue to work hard and fight for a fair election.

The first was to initiate a comprehensive investigation and conduct a legal and political audit to find all evidence of fraud; the second was to decertify Arizona’s election results (despite a large amount of fraud evidence revealed during the ten-hour hearing in Arizona on November 30, Arizona governor Doug Ducey still certified the election result on Friday, December 4); the third demand was to ask Governor Ducey to disqualify the current Electoral College or request that the U.S. Congress disqualify electors.

“We Are in a War Right Now”

Many lawmakers said the United States is currently in a war over the destiny of the entire country because its foundation is under attack.

Arizona Representative Walter Blackman said, “We are in a war right now… the Democrats are trying to take your vote away again… they’re trying to take away American votes… This day – on December 7 – Pearl Harbor happened. That’s why we see these flags at half mast… We have men and women that have bled for this country. And not only bled for the freedom and democracy and a republic, but bled for the right for people to vote. And when that is taken – that basic, fundamental right to ensure that who we want is in the office – when that is taken, it’s an attack on all of us. Not just those folks who think that they won.”

He continued, “Because what we’re going to see, if they get away with this, is we’re going to see down the road that somebody more sinister than the leftists that stole this election is going to come along and take the vote from everybody to include them.”

State Representative John Fillmore said that America came under attack on December 7, 1941. “Today we are under attack from an enemy more insidious, destructive, conniving and dangerous, an enemy within our own shores. They operate under the disguise of Americans and patriots and they are not. The right to vote is being stolen.” “We had a lot of people die protecting the right to vote… today in this day of infamy there shall be no standing down, no bothering to turn back.” “If we find as we’ve had evidence of audit, some people in America need to be tried and go to prison.”

State Representative Anthony T. Kern said President Trump wanted to drain the political swamp in Washington and cannot be left to fight alone. In a critical period of difficulty, he said, it is necessary for the general public in the United States to truly stand up and report evidence of election fraud and to truly support President Trump. He also mentioned that as state legislators, they will put their political careers aside and fight for the United States.

State Representative Travis Grantham said that if Americans lose the right to vote, they would lose the country. “I'm honest and I'm direct. I just say what needs to be said and it's not always what people want to hear,” he said. Grantham said the state assembly should be kept open but that while it is closed, people will continue to have their voices be heard and have every worry of theirs be heard.

“We Are Getting Thousands of Emails” About Election Fraud Every Day

Many representatives said that the November 30 hearing presented so much evidence of election fraud and that they were baffled why some people still claimed the evidence was insufficient or that there was no evidence of fraud.

State Representative Nancy Barto said, “We are getting thousands of emails sent to us every single day” about voter fraud people experienced.

Ms. Barto continued, “In light of this election's chaos as members and members elect of the Arizona legislature, we call for the rescission of the certification until all pending litigation has been fully adjudicated and certainty in our election results can be realized… Should decertification actions not be taken, I join my colleagues in calling for Congress to contest Arizona's electors.”

The representatives thanked the people for being brave and coming forward to tell the truth. They said their most important mission as public servants is to defend the foundation of our country, that is, the fairness of elections.

Lawyer Alexander Kolodin works with lawyer Sidney Powell. He mentioned in his speech that voter fraud led to 100,000 fraudulent ballots being counted in Arizona’s election: one category was direct manipulation of the results in the electronic voting systems; another category was that illegal ballots were counted, such as out-of-state voters submitting ballots when they should not have been registered to vote in Arizona. However, he said some legal ballots were not counted. He also mentioned witnesses being threatened and forced to stay silent.

Representative David Cook said, “I heard the woman say on Wednesday morning, they thought they were done counting the votes, and then a truck showed up with a bunch of ballots… If the democrat got 130% of the vote, shouldn’t we have someone look into that?”

Never Succumbing to Socialism and Communism

The lawmakers said that the United States will never succumb to communism and socialism. Senator Sylvia Allen shared a story from a woman who had emailed her. This election touched that woman’s heart because her father was in three different concentration camps during World War II. He came from a family of seven children. All of his brothers and sisters, his parents, his grandparents, his uncles and aunts were killed in the concentration camps because of the regime of Hitler and the Nazis.

This woman’s father, through the grace of God, lived through the ordeal and was able to come to America. Now he loves this country, and he taught his children what a special place this is, including “…how important it was that we protect our individual freedoms. One of the most important things to protect is our vote.”

Representative candidate Daniel McCarthy said, “We are on the right side of history… We will not succumb to communism.”

Some Americans who have lived under dictatorships, including those in Syria, China and other countries, spoke about the horrible life and political climate brought to the people by communist dictatorships. When they came to the United States, they truly realized what freedom is. Therefore, they are standing up to defend American freedom and law and order.

A gentleman spoke about the Insurrection Act in the U.S. “If stealing a presidential election is not an insurrection, then I don’t know what it is. The Insurrection Act says, that when the elected bodies, the states, will not uphold the Constitution, the President of the United States has a duty to uphold it.”

Many legislators have stressed that the legitimacy of the government comes from the people and that the people are the real ones in power. This is also the foundation of the United States.

“God Is on Our Side”

The speakers ended their speeches with “May God bless America, and May God bless you.” During the rally, people prayed repeatedly for God to give them enough ability, wisdom, and a peaceful mind to fight the war to the end.

Representative candidate Daniel McCarthy said, “God has already shown the world what he is willing to let us do to defend ourselves. God has already demonstrated to this world what he will allow Americans to do to have freedom… what you need to do is be bold.” He also emphasized, “This is a peaceful movement, to take backour government the proper way.”

One speaker said they will pray for those people who have been deceived by the fake news media and pray for God to open the eyes of the people who are being blinded.

Background on the Arizona Hearing

The Arizona State Senate held a hearing on November 30. Several witnesses testified that there were election violations in the state, including Dominion voting machines being easily hacked and connected to the Internet on voting day; Pima County having vote counting peaks that exceeded the processing capacity of the voting machine; the Justice Department having received an anonymous letter claiming that about 35,000 votes were added to every Democratic candidate in Pima County.

Some Republican lawmakers in the state and members of Trump’s legal team said that there was fraud in the state’s general election and urged the Arizona legislature to appoint its own electors.

On the day of the hearing, thousands of people gathered outside the Hyatt Regency Hotel in Phoenix to support Trump's legal team, asking lawmakers to do the right thing and count only legal votes.

But at the same time, Arizona officials certified the results of the general election and announced that Biden had won with a lead of 10,457 votes (or 0.3%).

Members of President Trump’s legal team and some Republican lawmakers called for the overturn of the state’s presidential election results, but the state’s Republican House Speaker said on Friday (December 4) that it would be illegal and that the legislature would not do so.

Arizona Republican Representative Andy Biggs said that there was enough evidence to support President Trump’s team in filing and maintaining the lawsuit in the state.

President Trump tweeted on the afternoon on December 5, “Between Governor Doug Ducey of Arizona and Governor Brian Kemp of Georgia, the Democrat Party could not be happier. They fight harder against us than do the Radical Left Dems. If they were with us, we would have already won both Arizona and Georgia...”

“Former Secretary General of Amnesty International: Time for the World to Speak Up Against Abysmal Human Rights Records in China”