(Minghui.org) When interviewed by Fox News on Sunday morning, December 13, President Donald Trump said that the election is not over and that he and his campaign will keep fighting for a fair election. 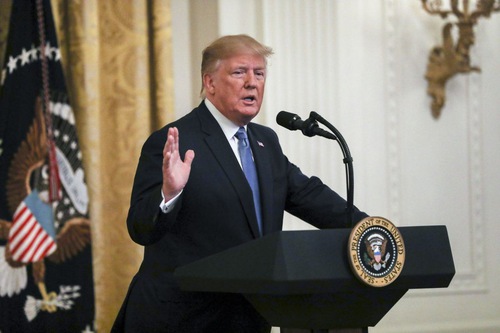 He expressed his disappointment in the U.S. Supreme Court for dismissing the Texas lawsuit against four battleground states (Pennsylvania, Georgia, Michigan, and Wisconsin) despite mounting evidence of election fraud. He said the justices did not have the courage to hear the case. As a result of the fraud, he is worried that the U.S. would have “an illegitimate president.”

“No, it's not over. We keep going and we're going to continue to go forward. We have numerous local cases,” Trump remarked. He said he had won Pennsylvania, Michigan, and Georgia, while he has an ongoing case in Wisconsin.

About one million people attended rallies and marches in Washington, D.C. and other places across U.S. the day before. They supported Trump and called for a fair election.

Trump: “Now is the time to fight harder than ever.”

In the past few days, Trump has been urging the nation to take election fraud seriously. “As President, I have no higher duty than to defend the laws and the Constitution of the United States,” he said in a speech on December 2. “That is why I am determined to protect our election system, which is now under coordinated assault and siege.”

“If we don’t root out the fraud, the tremendous and horrible fraud that’s taken place in our 2020 election, we don’t have a country anymore,” he remarked.

He reiterated this point while attending a rally on December 5 to support two Republican candidates for the Senate runoff election in Georgia. During his speech, he listed a lot of evidence of election fraud and said that socialism would not only destroy the country’s media, military, and court system but also its culture and history.

In the hour between 9:15 and 10:15 a.m. on December 10, Trump posted 9 tweets. He said Democrats stole the election and that the country should not be led by an illegitimate president. He also called on the people and the Supreme Court to save the nation.

“There is massive evidence of widespread fraud in the four states (plus) mentioned in the Texas suit. Just look at all the tapes and affidavits!” he wrote in one post.

“People are upset, and they have a right to be. Georgia not only supported Trump in 2016, but now. This is the only State in the Deep South that went for Biden? Have they lost their minds?” he continued. “This is going to escalate dramatically. This is a very dangerous moment in our history.”

He also retweeted a post from a supporter who was interviewed by OAN, “The fact that our Country is being stolen. A coup is taking place in front of our eyes, and the public can’t take this anymore.” Many American are afraid that, by committing the election fraud and getting away with it, Democrats may take over the U.S. in a coup that is similar to those that occurred in communist countries.

In another post, Trump retweeted a video showing how a worker scanned a ballot several times at a Georgian polling center.

One day after the U.S. Supreme Court rejected the lawsuit from Texas, Rudy Giuliani from the Trump campaign’s legal team announced plans on Saturday, December 12, “We move immediately to plan B which is to bring lawsuits now in each 1 of the states,’ he explained, “They’re a version of the 1 that was brought in the Supreme Court.”

Attorney Sidney Powell said that, because the election fraud involves foreign interference, it could trigger an executive order that Trump approved in 2018.

More specifically, “Not later than 45 days after the conclusion of a United States election, the Director of National Intelligence, in consultation with the heads of any other appropriate executive departments and agencies (agencies), shall conduct an assessment of any information indicating that a foreign government, or any person acting as an agent of or on behalf of a foreign government, has acted with the intent or purpose of interfering in that election,” stated the order. “The assessment shall identify, to the maximum extent ascertainable, the nature of any foreign interference and any methods employed to execute it, the persons involved, and the foreign government or governments that authorized, directed, sponsored, or supported it.”

During an interview, Powell said this executive order gives Trump “all kinds of power … to do everything from seize assets to freeze things, demand the impoundment of the [voting] machines.”

“Under the emergency powers, he could even appoint a special prosecutor to look into this, which is exactly what needs to happen,” she continued. “Every machine, every voting machine in the country should be impounded right now.”

“There’s frankly more than enough criminal probable cause to justify that, for anybody who’s willing to address the law and the facts purely on the basis of truth and not politics, or corporate greed, or global wealth,” she added.

“In this crucible moment of our time, we have to pray that truth triumphs over lies, justice triumphs over abuse and fraud, honesty triumphs over corruption,” remarked former national security adviser Michael Flynn during a rally in Washington D.C. on December 12. “The courts aren’t going to decide who the next president of the United States is going to be... We the people decide.”

During an interview with Worldview Weekend Broadcast Network on November 28, Flynn said that America stands at a crossroads that will determine whether it survives as a free nation or becomes something “unrecognizable.”

“What’s happening in this country should never happen, and there’s no doubt in my mind we are going through a crucible of history, and if we don’t correct what it is that’s happening in the next couple of weeks, then I hate to really even think what will happen in our country going forward into the latter part of December and certainly into the next month.”

“This is six to 10 states bonding together to manipulate their data to take control of the U.S. government and the Chief Executive Officer, the commander in chief. So this is not anything to be taken lightly,” he explained. “It’s not dirty politics, or tricks. It is treason, by the very nature against the United States government and the people of America.”

Considering it a national emergency, McInerney recommended a five-step plan for tackling the election fraud issue. The first step is to declare a national emergency based on the 2018 executive order on foreign interference with the election. The second step is to implement the Insurrection Act to quell potential riots. The next three steps are to declare martial law, suspend habeas corpus, and set up military tribunals to arrest and try those who allegedly participated in the steal.

“If we don’t solve it now, it’ll never be solved,” he explained, “Because we will move into a tyrannical situation that will eventually be—whether you can call it social democrats, or communist—it’s going to be both the same. It’s just a different name.”

According to Article III of the U.S. Constitution, “Treason against the United States, shall consist only in levying War against them, or in adhering to their Enemies, giving them Aid and Comfort. No Person shall be convicted of Treason unless on the Testimony of two Witnesses to the same overt Act, or on Confession in open Court.”