Washington DC: Hundreds of Thousands Rally to Support Trump and Pray for America

(Minghui.org) On Saturday, December 12, hundreds of thousands of people gathered in Washington DC again to protest the election fraud. They held concurrent rallies and marches at multiple locations, including on the National Mall, in front of the Supreme Court, and on Freedom Plaza. Many people prayed for blessings for America.

Attendees came from across the U.S., including Massachusetts, Ohio, Pennsylvania, South Carolina, Florida, and other states. Some who arrived early started rallies and marches in the morning. They called out, “Never give up!” “Never surrender!” “Stop the steal!” “Trump! Trump! Trump!” “USA! USA! USA!” 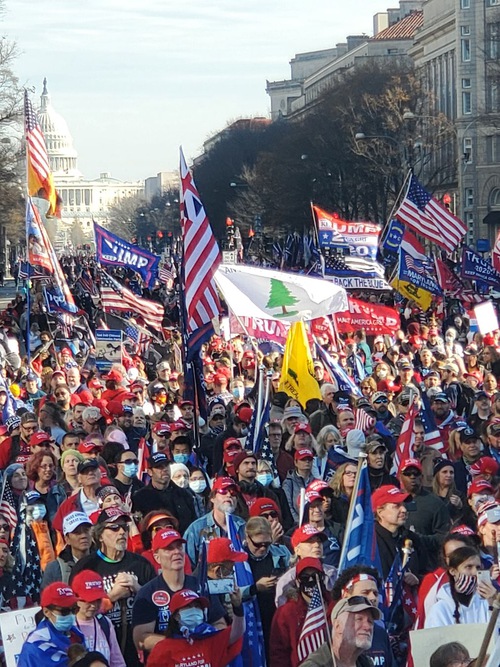 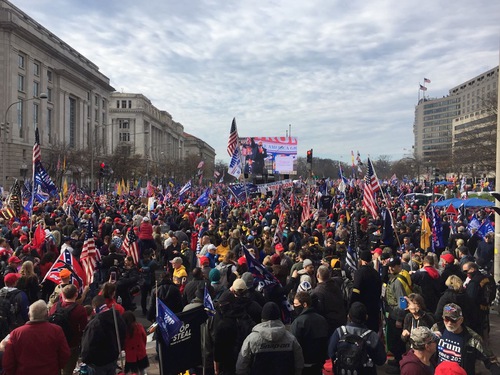 Hundreds of thousands of people joined rallies and marches in Washington DC on December 12 calling for a fair election.

Starting at 11 a.m., over 30 people of different ethnicities and from various professions spoke on the National Mall. Among them were government officials, religious leaders, business leaders, representatives of NGOs, military officers, radio hosts, and singers. They emphasized that the United States was founded on faith, that when we pray to the divine, the viciousness and lies will be dispelled and light and truth will return. The divine will lead America back on track and restore America as a nation of faith. People repeatedly prayed during the event, asking for God to bless America.

En route to the U.S. Military Academy at West Point, the Marine One presidential helicopter hovered over the crowd, which erupted in cheers when they saw Trump.

General Flynn: Next President Will Be Decided by the People

“The courts aren’t going to decide who the next president of the United States is going to be,” remarked former national security adviser Michael Flynn. “We the people decide.”

He said this country had never faced a crisis like this. In our hearts we are truly able to tell good from bad, and light from darkness. He said faith is in our hearts, which makes this nation special.

Speaking of news media, Flynn said fake media had been outrageous and damaged this country. He praised the Epoch Times for covering what is going on. He said truth not only matters to Trump, but also U.S. presidents in general, and the American spirit. That is why we have to do it well.

Pointing to Marine One high above, Flynn said Trump is a warrior and he will 100% be the next president.

In his speech, Flynn also referred to the Battle of Jericho in the Bible. According to the Book of Joshua, the walls of Jericho fell after the Israelites marched around the city walls once a day for six days and seven times on the seventh day followed by blowing their trumpets. The walls of the city crumbled after soldiers and priests blowing horns marched around it.

He said there is viciousness and corruption in the walls of the deep state. Nonetheless, there are also light and truth. Right now, from inside Jericho, he said we will breach the wall because we love America, that we are doing this for the U.S. Constitution and for Trump and God bless America.

Lindell: Fraud Exposure Is a Blessing

Mike Lindell, CEO of MyPillow, said in the rally, “This is a spiritual battle in our country for decades,” Recalling the moment of prayer in the Rose Garden to “return the nation to God,” he hoped everyone would step forward and “stand up for faith.”

He encouraged people not to back off since we have no fear. “We only have one fear. That is the fear of the Lord,” he continued. 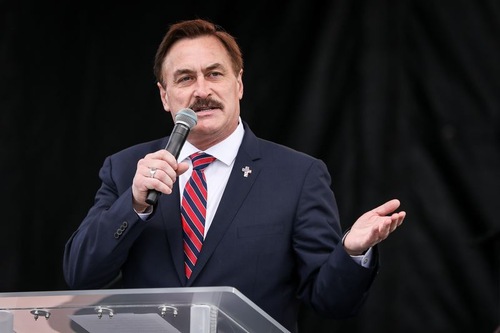 Mike Lindell, CEO of MyPillow, speaks at the event.

At 11 p.m. on election day, his friends told Lindell at campaign headquarters that Trump was winning in almost every state. Then things started to happen. As attorney Sidney Powell explained, at 11:15 p.m. the algorithm that deceived the whole country could not keep up because Trump had gotten so many votes.

“It broke the algorithm,” Lindell explained by quoting Powell. The opponents had no choice but to stop counting and dump in fake ballots. “We need America to see the truth,” said Lindell. “Let’s look at the fraud.”

He said exposure of the fraud is a blessing and “God has got all these in his hands.” As the scandal of voting machines and elections are exposed, he said there would be fair elections from now on. “The whole world is watching. This will be the greatest revival in history,” he added.

Radio host Alex Jones said we are standing with the divine and all these arrangements were not accidental.

Rob Weaver and Arina Grossu, founders of Jericho March, talked about their experiences over the past month.

Weaver said he was frustrated on November 5 since he knew something was wrong. After praying, he heard a voice that said, “It is not over.” He sat down and in his vision, he saw marches going around the capital and in all six swing states like the event on December 12. “This is birth from a vision. A miracle,” he added.

Grossu said she did not know Weaver at the time, but she had the same vision. Speaking of the rally, she said, “We want our voice heard... we want God to hear our voice. We are crying out to Him and asking Him to have mercy on our country, to have truth come out, and for transparency.”

She called out to the nation for a day of prayer. By repenting, we can all turn to God as a nation. “Because that is what our founding fathers did and that is how we won this country, because of our love for God and our faith,” she explained.

The two of them then asked the crowd to pray for God to tear down the wall of corruption as well as to protect the country and Trump together with his family. “People with faith started this country and we cannot let it go,” concluded Grossu.

Martin also thanked the Epoch Times for streaming the event live as well as RSBN and other news media. With their help, he said people from Japan, Taiwan, and Hong Kong are watching, because America is the “beacon on the hill.”

Vernon Jones, a State Representative from Georgia, said he is a supporter of Donald Trump and the U.S. Constitution. He believed the election was not fair or transparent. He said over 70 million people voted for Trump. “And a lot of us here, we’re concerned about that, but we’re letting them know we’re not backing down. We’re not going away,” he said. “What they’ve done is awaken a sleeping giant.

“I’m surprised many of them haven’t stepped up to the plate and supported this president like this president supported this country. Just doing the right thing and, more importantly, standing up for, again, over 74 million people who said, ‘Look, we want to reelect Donald Trump,'” Jones remarked. 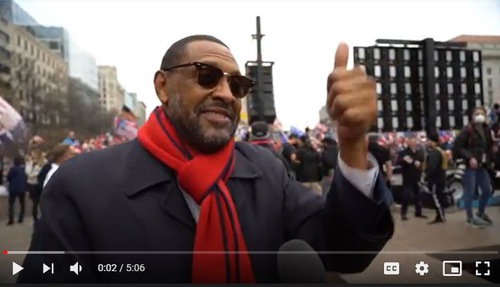 “We all know that when the sun goes down, here comes Antifa and Black Lives Matter attacking innocent people who are marching on their state capitol, and they have a right to protest for their rights as well, but that’s not the American way,” he continued, indicating that Democrat leaders should have denounced those groups. However, “they are embracing socialism. We cannot be like Venezuela and other countries where you see socialism doesn’t work.”

Jones said State Secretaries in the battleground states should verify the votes, not certify them. “There are many of us there, we are standing with this president. And let me tell you, President Trump is not going anywhere, he is the Republican Party, and I support him,” he said.

Pennsylvania Senator: Our Faith Will Help Us Change History

Pennsylvanian state senator Doug Mastriano, who led the Senate hearing in Gettysburg in November, said our faith would give us strength, just like what happened to our founding fathers.

He also recalled the winter of 1776 when George Washington was badly defeated in winter. Morale was declining and soldiers were leaving. At that moment, “George Washington appealed to heaven. God intervened and it was a Christmas Day,” explained Mastriano. As a result, Washington was able to drive the enemy out of Trenton, defeat them, and change history.

“This is our time, and this is our generation,” Mastriano continued, emphasizing the importance of safeguarding principles by quoting Benjamin Franklin: “If we do not hang together, we will be hung separately.”

In an interview, he reviewed the election problems in Pennsylvania, where last-minute changes to the election rules that bypassed the legislative branch were unconstitutional. “There’s something gone wrong in Pennsylvania and elsewhere, and it needs to be corrected,” he explained. “We have a Republic and we plan on keeping it.”

Kevin Jessip, President of The Return International, said he is excited to see about one million people coming to events like this.

He said the counterculture movement in the United States is going against God’s will and has to be undone. “We see not only are they trying to continue abortion, the slaughter of our young people, but they’re trying to get us to join it and pay for it. That’s not going to happen,” he said. 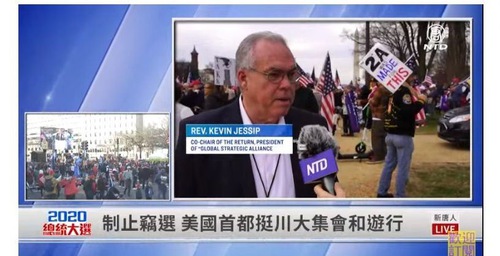 Kevin Jessip, President of The Return International, called for people to return to tradition.

“We’ve already removed prayer from school, we’ve taken Bible reading out of school, we’ve changed the definition of marriage between a man and a woman. This is God’s greatest institution,” he continued. “We’re going to restore all of that... we’re turning this nation back to the way, the will, and the word of God, which is our foundation.

“Flynn: “The Truth Will Surely Prevail””

“My Mother’s Behavior Is a Mirror for My Cultivation”