Flynn: “The Truth Will Surely Prevail”

(Minghui.org) On December 12, 2020, tens of thousands of people from across the United States gathered at Freedom Plaza, in front of the Supreme Court, and on the National Mall to participate in parades and rallies to demand a fair election for President Trump.

General Michael Flynn, who had recently been pardoned by President Trump and subsequently had his indictment dismissed by a federal judge, spoke at multiple rallies, including “Let the Church Roar,” “Stop the Steal,” and “One Nation Under God.” It was General Flynn's first public speech since he became a free man and he was welcomed by cheers of “Fight like a Flynn” from the crowd when he took the stage. 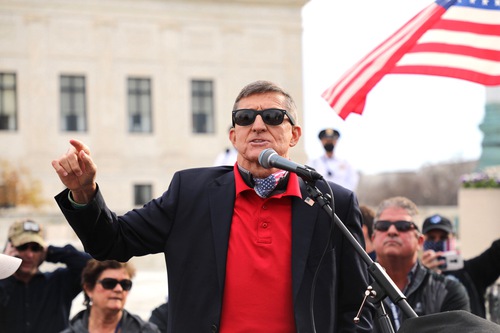 In his remarks, General Flynn encouraged the American people to fight shoulder to shoulder, because this systematic theft of an election challenged the foundation of the United States.

On Election Day November 3, 2020, the votes counted made a U-turn overnight. Trump, who originally led in the swing states, suddenly fell behind his opponent. As evidence of fraud in the U.S. election continues to come to light, more and more Americans are realizing that this election is a battle between good and evil and it is about the foundation of America. More and more people across the United States, including some veteran Democrats, have come forward to stop the left from stealing the election. 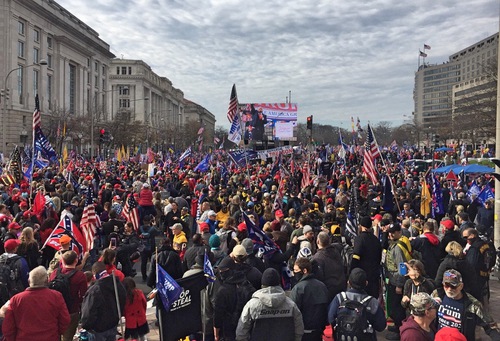 On December 12, 2020, tens of thousands of people from across America gathered in Washington DC to show their support for President Trump.

He also said, “We are waging a battle across America. We have to maintain our humility. Our humbleness is what makes us great. When you can see a solider on a battlefield, who’s engaged in a firefight, trying to either save his buddies’ lives or trying to engage the enemy, and then in one split second, he grabbed the child off the street and turns around and protects that child from danger—that’s the American spirit, that’s the American soldier. So we are fighting. We are fighting with faith. We are fighting with courage.”

He added that this is the moment that determines the survival of the United States, that the United States is facing a constitutional crisis never seen before. As a soldier who has fought bloody battles and is unquestionably loyal to his country, he said, “In our minds, that's where we find fear, but in our hearts, where we truly know, that's where we differentiate good and bad, darkness and light. We know that in our hearts We need to be fearless as Americans.” 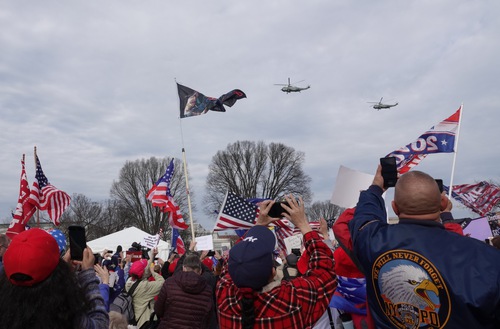 Flynn said all the hatred comes from the left. “Every time they throw an arrow at [Trump] they throw an arrow at us. We cannot allow that in this country. We the people have to continue to fight back. [Trump] knows—he knows—that the people that he can trust are people that he’s never met. And that’s you. He trusts you because he knows you know what’s going on and you will not allow what’s going on to happen in our country.” 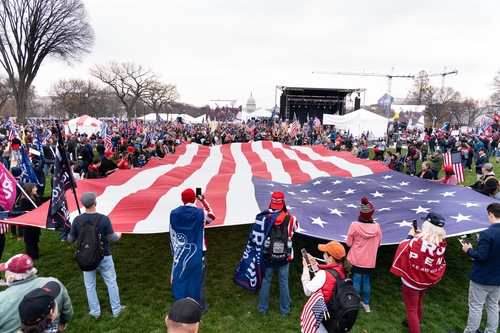 For the sake of America as a nation, General Flynn encouraged people to fight with faith and courage, to fight for the next generation of Americans. For those who have been threatened and attacked for coming forward to testify under oath at the election fraud hearings, he said that this is the honor of a patriot. Only in the U.S. do people have such faith and culture. And it’s something only an American soldier will do. For those who stepped forward and testified, they represent such faith and spirit. Faith is what makes the American people outstanding and what differentiates America from other nations.

General Flynn again referred to the Battle of Jericho. He said that our Founding Fathers knew that there would be corrupt people within the walls of Jericho, and they created the “states” to hold the state legislatures accountable because they were the closest to the people. If the state legislators could not understand their responsibility, people would vote them out.

General Flynn asked the crowd to take this message to their home states, as people can’t accept what’s happening as right. He also said that, although the Supreme Court rejected the Texas election lawsuit against Pennsylvania, Georgia, Michigan, and Wisconsin, there are still avenues that Trump could take, and many things were still developing, and “the truth will surely prevail.”

General Flynn said earnestly, “Nothing can stop the power of prayer.”

Flynn was a retired lieutenant general in the US Army and served in the U.S. Army from 1981 to 2014. During his time in the Army, Flynn served in Iraq and Afghanistan and played a key role in formulating counter-terrorism-related intelligence strategies. Flynn served as the Director of Intelligence of the Joint Special Operations Command and the Director of Intelligence of the U.S. Central Command.

Flynn's first mission after leaving the Army and intelligence training was in the famous 82nd Airborne Division. There, he plunged into the emerging world of electronic warfare—it was this early mission that convinced him that his career would be spent in the military.

Early in his career, he served in Honduras, Haiti, and Grenada on assignments under President Reagan's administration and then traveled the world as an instructor to train U.S. troops before leading operations in Iraq and Afghanistan. Before coming to Washington, Flynn served in nearly every major conflict zone in recent history. He then transitioned from active duty to Washington DC, which turned out to be a more treacherous theater of war than any conflict area he had ever experienced.

On August 7, 2014, Admiral Mike Rogers, the director of the National Security Agency, hailed General Flynn as “the best intelligence officer of the last two decades.”

Iraqi war veterans say, “Flynn is a brave fighter. He is forward-looking and with extreme attention to detail, his ability to manage intelligence is unparalleled.” With extensive experience building teams, Flynn believed that actions speak louder than words and are deadly to America's enemies. Flynn has been hailed as a “war hero in Iraq and Afghanistan, the man who saved America from half a dozen terrorist attacks.”

“Washington DC: Hundreds of Thousands Rally to Support Trump and Pray for America”