(Minghui.org) During one of the state legislature hearings in Georgia on December 3, 2020, President Trump’s legal team presented surveillance footage from a ballot-counting room at State Farm Arena in Fulton County. The video showed ballot-counting workers telling poll observers late at night on Election Day to leave before continuing to count and pulling out boxes filled with ballots from under the table.

In addition to the video referred to by President Trump as “blockbuster testimony,” many witnesses also testified during the two hearings taken place on December 3 and presented evidence. 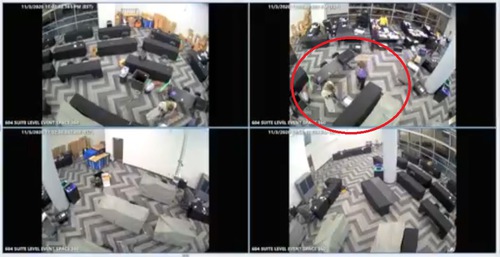 Between the night on November 3 and early morning on November 4, 2020, severe cheating and fraud incidents happened in State Farm Arena in Fulton County, Georgia. President Trump called it the “blockbuster testimony.” (Screenshot from the video)

Based on surveillance footage in Room 604, there were four cameras capturing the working site from different angles. This room was for tabulating absentee and military ballots.

At around 10:25 p.m. on the election night, a woman with blonde braids told workers to stop counting and notified everyone to go home including the Republican poll observers and Fox News reporters. The reason given was a burst water pipe. These people all left at around 10:37 p.m. However, the video showed that, after the reporters and poll observers had left, four people stayed in the room and continued to count the ballots.

At around 11:00 p.m., these four workers pulled out at least three suitcases full of ballots from under a table covered with a black tablecloth.

At that time, six people in total appeared in the video. They started scanning ballots without any observation or supervision. They were operating on three machines, each for two hours, until 12:55 a.m. One witness said one machine can process 3,000 ballots each hour. Given the three machines that had been running at the same time for two hours, the number of ballots processed (3,000*2*3=18,000) far exceeded the current 12,670 vote difference between the two presidential candidates.

The witness confirmed the person who hid the ballots under the table was the same woman who asked the poll observers to leave and then pulled the hidden ballots out from under the table.

Why did this site stop tabulating the ballots? The official reason of a burst pipe to ensure the safety of ballots later turned out to be a hoax. There was no public repair record for the burst pipe. The witness said it was a toilet leak, not a burst pipe. The witness said the leak happened at around 6:07 a.m and was fixed two hours later, at around 8:06 a.m. A state representative at the hearing also pointed out that from the video footage, nothing was indicating that a plumbing issue would have impacted the ballot counting.

Geoffrey Stiles, vice president of Atlanta Hawks NBA team that uses State Farm Arena as its home court, also said in a text message that the so-called burst pipe was “highly exaggerated.” It was a “slow leak” and was contained quickly.

This was obviously unlawful. Jackie Pick, a lawyer who is volunteering with President Trump’s legal team, while presenting the video during the hearing, asked why these ballots were placed separately and tabulated in secret, with no observation.

Responses to the Video

President Trump’s lawyer Rudy Giuliani commented that the footage shown during the hearing is a direct indicator of voter fraud and cheating during in the election in Georgia. He called the video a “SMOKING GUN FROM GEORGIA” and also said on Twitter, “VIDEO EVIDENCE: Caught Red Handed, TRUMP WON GEORGIA!”

Guiliani said, “The Georgia middle of the night theft of thousands of votes changes everything. Watch it and Biden is not-elect anything. Looks like Biden Democrats doing a bank heist. In 5 states there are 800 sworn statements of eyewitnesses to Democrat cheating. States changing.” “The State Legislature has no choice but to assume its powers under the US Constitution, article II (1) [2] and select Trump electors.”

After the video was released, Georgia Republican Governor Brian Kemp, told Fox News that he has called for a signature audit, but the power in the state to make the order lies with the secretary of state's office. “I think it should be done. I think especially [given] what we saw today... it raises more questions,” he said.

Kemp said, “I think in the next 24 hours, we will see a lot more from the hearings that the legislature had today and we will be able to look and see what the next steps are.”

In the meantime, another important piece of evidence was reported. John Fredericks, a radio talk show host, said on Steve Bannon’s War Room that President Trump’s team has got a hold of a Dominion voting machine. Through a simple one-minute operation, it can change the ballot counting data and results.

This voting machine was from a very small county in Georgia. Based on the examination of the voting data in this machine, 37 ballots for President Trump were automatically flipped to Biden. This number did not seem high. However, the voting sample only accounted for 0.26% of the total votes in Georgia.

Based on this rate, at least 14,000 votes in Georgia could have been flipped from Trump to Biden. But according to results certified by the state, the lead Joe Biden has over Trump is only 12,670 votes.

The Woman in the Video

Media confirmed that one of the main characters in the video is an African American woman named Ruby Freeman. Gateway Pundit media used her purse as a clue and traced her identification. Later people found out that her supervisor in the vote-tabulation station, the blonde-braided young woman, turned out to be Ruby Freeman’s daughter.

Freeman calls her daughter Shaye. She posted on her Facebook page a November 2 report by The Atlanta Journal-Constitution, which identified her daughter, Wandrea Moss, as “Supervisor of registration,” and who was “giving that look to the employees.” Freeman added, “Mommie is so proud of you.”

In a video Freeman posted online, she not only openly transported the ballots, but also took a selfie video of the whole process, which showed many ballots with no return address.

Netizen Femme forwarded the video and commented, “Our DOJ & FBI are so corrupt the criminals even make videos WHILE committing their federal crimes knowing there won’t be any consequences. Ruby Freeman everyone…stuffing ballots.”

Freeman appeared to be totally indifferent about her crime and whispered “don’t say nothing” in the video. It’s apparent that she knew what she was doing and yet she still videotaped all the ballots with no return addresses placed all over the hallway.