(Minghui.org) Falun Dafa practitioners held events in Leipzig's downtown and central train station on November 7, 2020, to introduce the peaceful practice to the public. They also raised awareness of the Chinese Communist Party’s (CCP) persecution, especially its state-sanctioned organ harvesting from living practitioners. They reminded Germans how the CCP’s irresponsible behavior regarding the coronavirus caused a global pandemic and they called for the Party to be disintegrated. 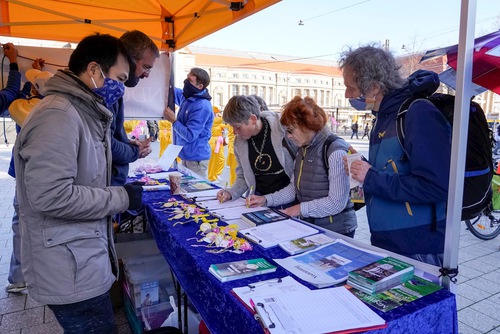 People sign a petition which calls for the CCP’s persecution to end and the Party to be disintegrated.

Tens of thousands of people participated in various events that day. The largest event was “lateral thinking”, protesting the government’s improper epidemic prevention measures against the CCP virus (coronavirus). Thousands of people were in the train station and downtown. 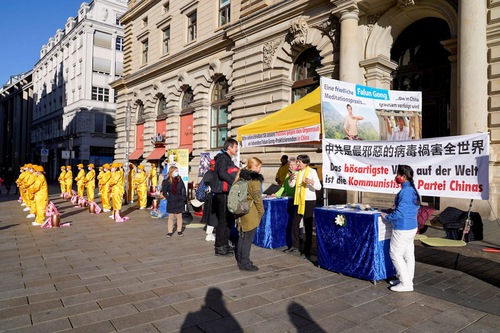 Practitioners demonstrate the exercises during events in downtown Leipzig. 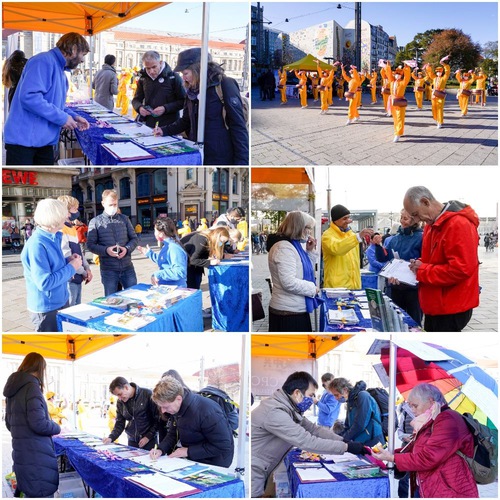 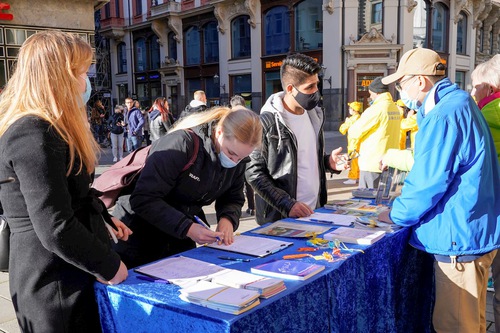 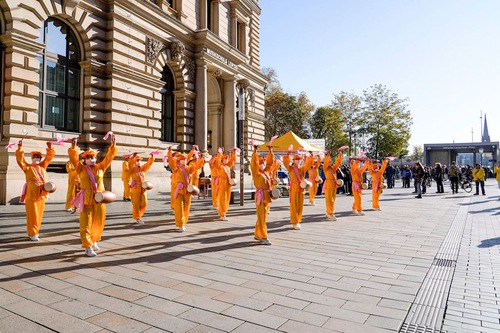 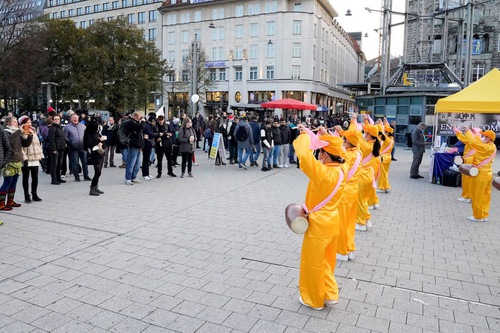 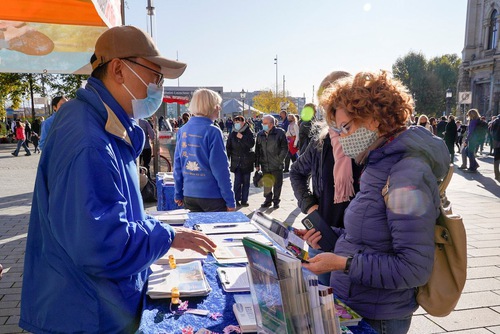 People learn about Falun Dafa and the persecution.

“The Power of Kindness”

Passersby were drawn by the practitioners’ waist drum performances, and several people stopped to talk. They learned about Falun Dafa, the CCP’s persecution and the live organ harvesting. When they understood that Dafa’s principles of Truthfulness-Compassion-Forbearance is completely opposite of the CCP’s ideology of violence and lies, many signed a petition calling for an end to the persecution and to disintegrate the Party.

One passer-by said, “This protest is peaceful. Your righteous and positive energy is the power of kindness.”

Practitioners told the public that the pandemic was due to the CCP’s initial cover-up and disinformation. Germans are concerned that the current lock down could lead to more companies closing permanently.

Youths Change from Making Trouble to Listening to the Truth

Four young people holding beer bottles noticed the waist drum team and came to make trouble. They attempted to block people from watching the performance. Practitioner Tam stepped forward and politely tried to stop their interference. They did not listen, and even attempted to fight him.

Tam returned to the information stand. One of the young people followed him and listened to Tam’s explanation of Falun Dafa and the CCP’s live organ harvesting. After the youth listened carefully, he signed the petition.

The youth brought the other three young people to the stand. They also listened to Tam’s explanation. All three of them signed the petition.

Leipzig once played a pivotal role in the overthrow of the communist dictatorship in the former East Germany. The famous “Monday Demonstrations” movement started in Leipzig. Back then, East Germans protested the communist dictatorship in the streets every Monday night. This activity became more and more popular and eventually the Berlin Wall was dismantled.

A Vietnamese Falun Dafa practitioner talked about his experiences during the Monday Demonstrations. He said he wished to spread the facts with kindness, protest peacefully and bring the culprits to justice. He hoped people would learn about the CCP’s crimes, such as live organ harvesting.

Many passers-by were moved. A man signed the petition and said to his friends, “He is a good man and doing a good deed. Come and sign the petition.”

Surrounded by protesters, the practitioners were an oasis of peace and kindness, and this deeply impressed everyone. The riot police on duty, who prevented the Antifa group and extreme rightists from making trouble, also remarked on the practitioners’ peaceful behavior and kindness.

A practitioner drove his car to load their items when the event was over. He handed the event permit to a riot police officer on duty. The officer immediately let the practitioner pass and said, “You can go in. If anyone asks, just say you're Falun Dafa. We all know about Falun Dafa.”

“Gratitude to the Founder of Falun Dafa from Practitioners in Melbourne, Australia on Thanksgiving Day”