(Minghui.org) From the United States to Europe, Falun Gong practitioners are continuing their efforts informing government officials and the general public of the 21-year-long brutal persecution of Falun Gong in China, especially forced organ harvesting from practitioners by the Chinese Communist Party (CCP).

An online forum was held by Doctors Against Forced Organ Harvesting (DAFOH) on November 19. Two practitioners recounted their personal experiences of being persecuted in China for upholding their faith. One particular detail discussed was the atypical medical examinations of detained practitioners and the removal of internal organs.

During the Third Geneva Forum between November 9 and 13, Nico Bijnens, President of the Belgian Falun Dafa Association, reviewed the mistreatment practitioners had received in China for their beliefs. He listed numerous reports that confirmed the CCP's crimes against Falun Gong practitioners.

Steven Chabot, U.S. Representative from Ohio, criticized the forced organ harvesting in China and called it a “heinous and barbaric” practice. He is working on a piece of legislation that would hold CCP officials accountable for the persecution of Falun Gong practitioners, including those involved in the organ harvesting.

Weldon Gilcrease from the University of Utah is deputy director of DAFOH. He said the number of transplants had skyrocketed since 1999, when the CCP began to persecute Falun Gong. The increase in transplants occurred in the absence of a functional organ donation system in China and a decrease in the number of executed prisoners in the country.

Even during the pandemic this year, those infected with coronavirus in China only needed 3 or 4 days of waiting time for lung transplants. The surprisingly short wait time points to a gigantic donor pool with individuals beings killed at any time to meet the demand. Together with the massive suppression of Falun Gong and financial motives, the CCP has made China the only country in the world with a state-run organ harvesting system.

A report from an independent people’s tribunal last year was also discussed in the forum. Based in London, the China Tribunal found the CCP had conducted organ harvesting on a large scale in China for years. Sufficient evidence has shown that the regime had committed murder, genocide, and crimes against humanity.

Two practitioners who fled China testified in the forum. Wenyu Liu, a graduate from Tsinghua University, was detained many times because of his belief in Falun Gong. While in detention, he and more than 40 other detained practitioners went through special physical examinations and had their blood drawn. Non-practitioner detainees were not asked to do the same examinations or give blood samples.

Jiang Li from Chongqing talked about her father Jiang Xiqing, who suddenly died at a labor camp in 2009. When she and other family members rushed to the morgue, they were shocked to note that her father's body was still warm. When they refused to sign the consent for cremation, officials went ahead and cremated the body anyway. They also offered 300,000 yuan (or $46,000) to keep the family quiet. Two months later, a procuratorial officer from Chongqing claimed that all internal organs of Jiang Xiqing had been taken to make specimens. Based on other evidence related to forced organ harvesting, Jiang Li believed that her father was such a victim.

Hamid Sabi, a counsel to the China Tribunal, said that over 50 testimonies had been reviewed in 2019 before the Tribunal reached its conclusion in 2019. He said the malpractice still continues and Falun Gong practitioners are the main victims.

Matt Salmon, vice president of government affairs at Arizona State University and a former U.S. representative, urged actions such as zero tolerance of such a crime. “I’m not sure that just by putting out bills that condemn practices is enough. I think we have to have legislation that actually has teeth behind it,” he remarked.

Bijnens spoke during the second session of the Third Geneva Forum on November 11 titled “Religious Persecution: Crackdown on People of Faith in China.” He said the consequence of the persecution in China is devastating. Besides brutal physical torture, mental abuse, and psychiatric abuse, the suppression directly targets people who strive to improve their moral characters following the principles of Truthfulness-Compassion-Forbearance. As a result, people were forced to choose between the traditional values and the CCP’s party line of hatred and lies. 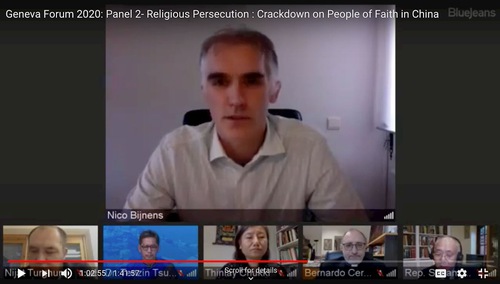 What makes this persecution unique also includes forced organ harvesting, a crime unveiled in 2006 by an independent investigation by David Matas, Canadian human rights lawyer, and David Kilgour, former Canadian Secretary of State (Asian-Pacific). In 2009, they published their findings in a book with the title of Bloody Harvest: Organ Harvesting of Falun Gong Practitioners in China.

“Falun Gong practitioners were arrested in the hundreds of thousands and asked to recant. If they did not, they were tortured. If they still did not recant, they disappeared,” wrote the authors in the summary of the book. Waiting for a kidney transplant can take 6 or 7 years in a Western country while in China, it only needs a few days. Bijnens said this can only be explained by forced organ harvesting, where Falun Gong practitioners are the main source.

The conference panel agreed that China has one of the worst human rights conditions in the world. Implementation of high tech equipment takes the surveillance and censorship in China to a new level. The speakers called on the international community, as well as the United Nations, to take action and address this issue.

“China Fahui | Enveloped by Compassion After Letting Go of Fear”