Prosecuted Twice for the Same Charges, Liaoning Professor Incarcerated for a Decade for Her Belief (Part 2)

Once, as part of the efforts to force Falun Dafa practitioners at Masanjia Forced Labor Camp to renounce their belief, all practitioners were forced to attend a seminar given by a sham qigong master. Ms. Liu Ronghua covered her ears and refused to return to the seminar after lunch. As a result, her term was extended by 10 days for “violating labor camp rules.”

On another occasion, when the practitioners were made to watch a propaganda video attacking Falun Dafa, Ms. Liu stood up, pointed out that it was fake and walked out. Her term was extended by 60 days and she was confined to a small isolation cell for three weeks.

She was handcuffed to the radiator and forced to stand during the day. At night, she was taken to the office, again handcuffed while standing, and watched by the guard on duty. The guard only removed her handcuffs from one hand briefly during meals. Later she was put in solitary confinement, still cuffed in a standing position. 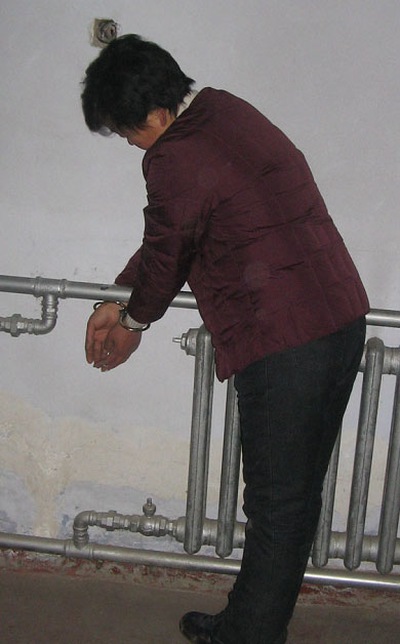 Torture reenactment: Handcuffed to a radiator for long periods of time

When Ms. Liu recalled being cuffed standing up, she said, “I was so tired that I fell asleep standing up.” Being cuffed for long periods of time left Ms. Liu’s left wrist permanently injured and she cannot lift heavy objects to this day.

After three weeks of solitary confinement, Ms. Liu returned to her cell. To continue her isolation and further prevent her from talking to other inmates, they only brought her to her cell after 11 p.m., when all others had gone to sleep. During the day, she was still held in a small cell by herself. At 4 a.m., before everybody else was awake, she was awoken and taken back to the small cell. That was her routine until she was released on July 4, 2002. Due to the extreme humidity of the small cell, Ms. Liu had coin-sized scabies all over her body.

Wang Xiaofeng, the head of Division No. 1, once said to Ms. Liu, “Why are you handcuffed for so long? Because you talk too much. You’re a bad influence.” The long-term solitary confinement was a result of her pointing out that the propaganda was fake and telling other practitioners not to give in to the brainwashing.

While Ms. Liu was confined to a small cell at Masanjia, her husband filed for divorce. He came with officials from the Zhongshan District Court to the labor camp and asked Ms. Liu to sign the paperwork brought by the court officials.

The paperwork stated that Ms. Liu’s belief in Falun Dafa caused conflicts within the family, and therefore a divorce was granted. The CCP’s persecution policy caused tens of thousands of Falun Dafa practitioners to be forcibly separated from their families, yet the authorities blame the practitioners’ upholding their belief for causing the tragedies.

Fired from Her Job

On July 4, 2002, the day Ms. Liu was scheduled to be released after spending a year and seventy days in the labor camp, the guard unlocked the small cell where she'd spent most of her time during the term.

After walking out of the labor camp, Ms. Liu turned around and saw many detained practitioners waving at her from the windows. She got teary-eyed, quickly turned around, and dared not to look at them again. Without this wrongful persecution, these good wives, loving mothers, and caring daughters would not be separated from their families. However, because of their belief in the universal principle of Truthfulness-Compassion-Forbearance, they are incarcerated and subjected to abuse and torture at the hands of the CCP.

Ms. Liu returned to Dalian around midnight and knocked on the door to the home that she had been away for more than a year. She went into her son’s room the next morning and woke him for school. Her son opened his eyes and called out, “Mom!” Ms. Liu said, “Can I get a hug?” In her arms, Ms. Liu’s son told her about the day she was arrested, “I waited and waited for you to pick me up at school and ran out of patience. I was so hungry that I cried. Then I saw Daddy running toward me.”

Her son gave Ms. Liu a gift he'd made while she was detained. He'd waited patiently for this day so he could surprise her with it. Ms. Liu hugged him tightly.

After a short recovery period followed her release, Ms. Liu contacted the university, hoping to return to work soon. However, she was told that she had been fired by the university Party secretary Li Yuanpeng in July 2001. Ms. Liu petitioned many times at the school to have her job back but was turned down repeatedly by the school administrators.

Without a job, Ms. Liu could hardly support her son and her elderly parents. Between 2003 and 2004, she frequented the city’s petition office, stating how the school fired her without her knowledge or consent, and demanded to go back to work. But her case was never overturned.

In order to keep an eye on where she was and what she was doing, the Dalian 610 Office officials had local police monitor and harass Ms. Liu repeatedly at her home after her release. To avoid the constant harassment, Ms. Liu moved to a rental place and rented her own apartment unit out. The police harassed her tenant many times, trying to find out Ms. Liu’s whereabouts.

Under a direct order from the Dalian Domestic Security Division, officers from the Qingniwa Bridge Police Station arrested Ms. Liu on September 21, 2009. She was taken to Yaojia Detention Center and held there for 37 days.

Ms. Liu was interrogated multiple times during this detention. Once, after an interrogation session, she refused to stand facing the wall and was verbally attacked. She shouted, “Falun Dafa is innocent. Falun Dafa is good.” An officer slapped her in the face twice. The police also sought out her ex-husband for information and attempted to collect evidence against her.

Ms. Liu’s elderly father was in poor health. The family kept Ms. Liu’s arrest a secret from him. Her nearly 80-year-old mother changed transit three times and traveled 50 miles each way to petition for Ms. Liu’s release at the Qingniwa Bridge Police Station, but to no avail.

Ms. Liu was given two years of forced labor on October 21, 2009. She was taken to Masanjia Forced Labor Camp in late October and placed in Team 6 of Division No. 3.

There were more than 200 Falun Dafa practitioners detained at Masanjia when Ms. Liu returned in October 2009. Ms. Liu stopped just outside the gate and resisted entering the facility, which prompted head of Division No. 3 Zhang Jun, Political Instructor Zhang Zhuohui, and team lead Wang Danfeng to beat, kick and drag her into the camp. Despite her strong protest, the guards forcibly put the camp uniform on her.

Team lead Wang Danfeng told Ms. Liu, “The sooner you wear the uniform, the sooner you can call home and have visitors.” However, during the two years she was detained there, Ms. Liu was never allowed visitors nor any phone calls. Her communication with the outside world was cut off completely. Her family was only allowed to deposit money into her account as the labor camp authorities wanted to make sure the practitioners had money to cover their own medical expenses, should she develop any condition due to the persecution.

Ms. Liu’s husband Mr. Yi and her mother traveled all the way to visit Ms. Liu at Masanjia in November and brought her winter clothes and money. Ms. Liu’s father stayed behind due to high blood pressure. The guard in the visitation room, however, turned down their request to see Ms. Liu because she had not yet renounced Falun Dafa. The guard added that even if she did, she would not be allowed to see any family member who also practiced Falun Dafa.

Ms. Liu’s family consulted two lawyers and both declared it a violation of the law for the labor camp to deny a detainee visitation rights and advised the family to appeal. After studying Ms. Liu’s forced labor sentence, the lawyers added that the paperwork had no legal effect without an official stamp, which could hinder them from representing Ms. Liu or seeking justice for her.

Ms. Liu’s family visited the director of the Qingniwa Bridge Police station multiple times to obtain an official stamp but the director was either not there or in a meeting, so the family never met with him. Eventually, the guard on duty at the entrance no longer let the family enter the building.

During the 60-day window to appeal, Masanjia Forced Labor Camp did not allow Ms. Liu to meet with her family, and the police didn’t release a final verdict with an official stamp. Therefore, the lawyers were not able to file an appeal. This unlawful conduct on the part of the CCP officials meant that Ms. Liu lost her chance to appeal.