(Minghui.org) Falun Gong practitioners held a march in downtown Toronto on November 14, 2020. The march called for abandoning the Chinese Communist Party (CCP) and ending the persecution of Falun Gong.

The march was led by the Tian Guo Marching Band and also featured a Falun Gong exercise demonstration and waist drum team.

Another rally was held near the parade route and many attendees turned to watch and applaud the Falun Gong march.

The coordinator of the march Jiang Fan said that police arrived one hour before the march started. “They told us about other marches and events along the path of our march. The police chief said afterward that our march was very disciplined. I explained the purpose of the march to him and how the CCP has damaged China and the world. He said he knew.” 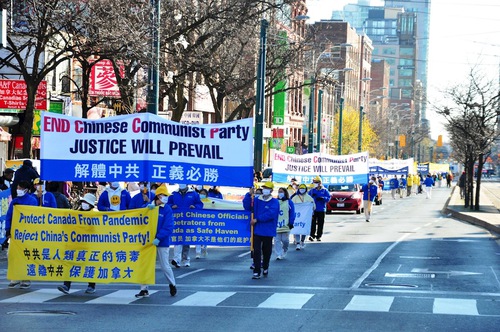 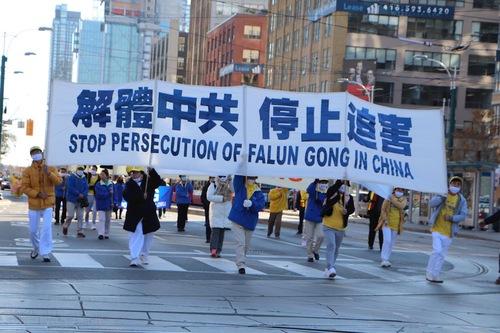 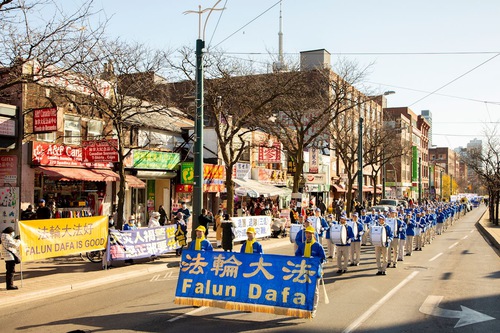 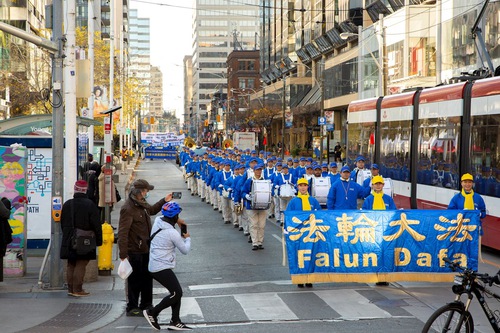 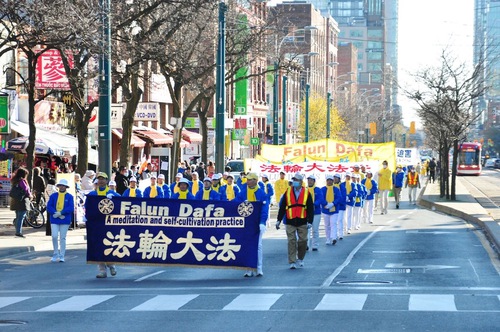 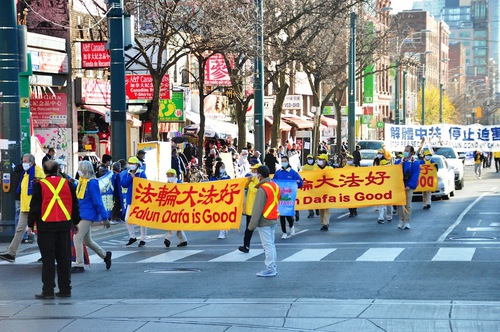 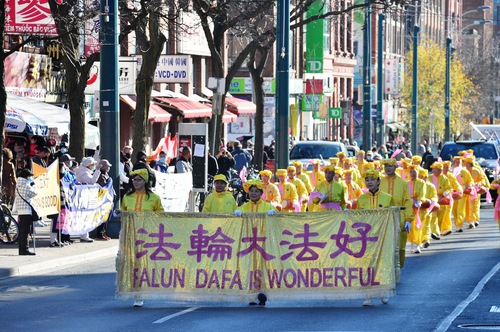 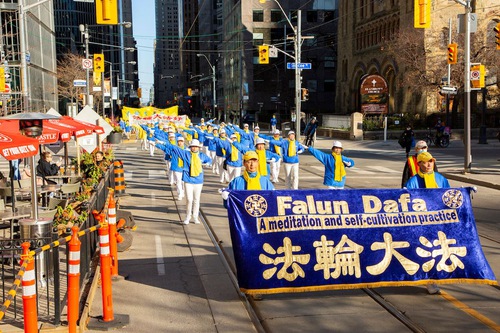 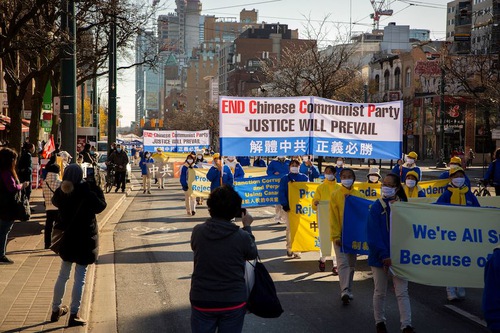 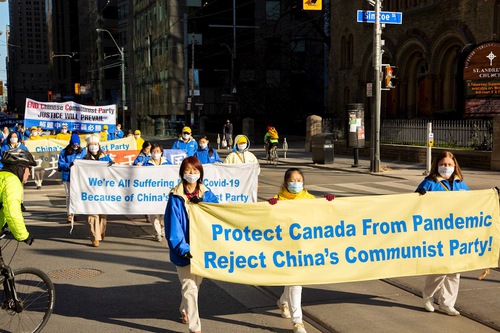 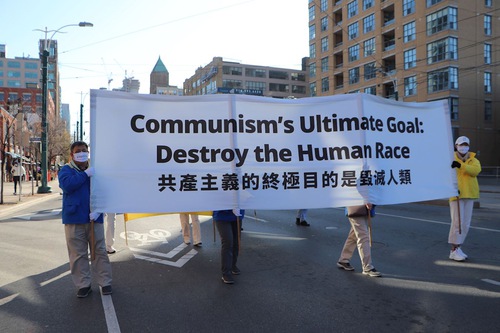 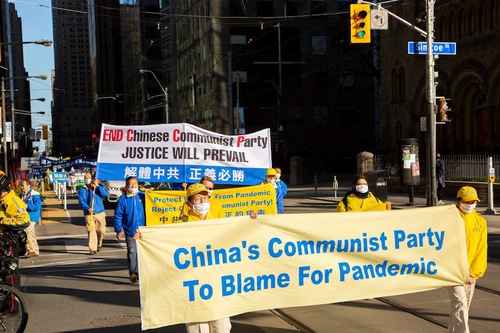 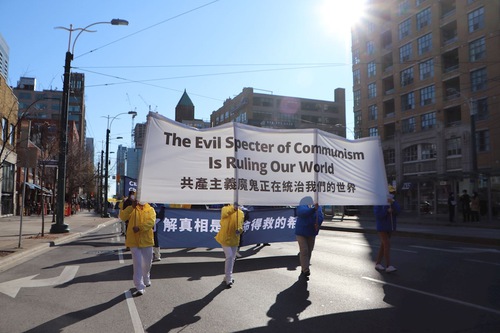 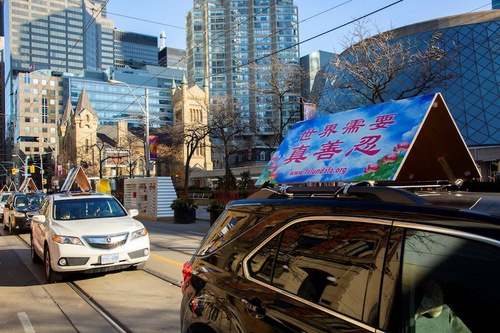 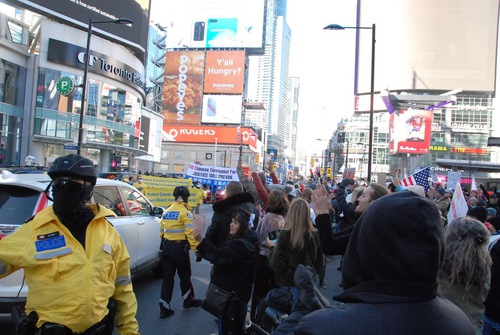 Attendees at an unrelated rally applaud and take photos of the march.

“I Must Learn Falun Gong.” 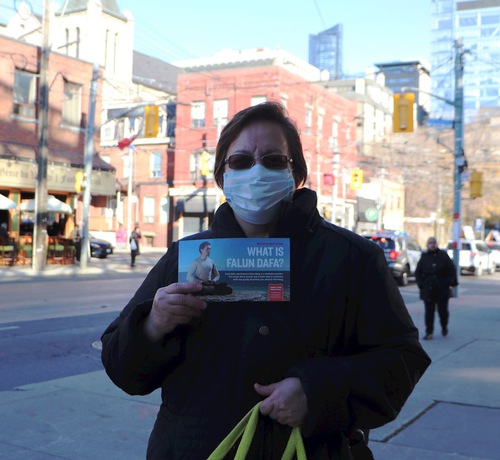 Senior Baker Carmen Croz Denys is happy to get a Falun Gong flyer at Dundas Square.

Carmen Croz Denys, a senior baker from El Salvador who immigrated to Canada over 30 years ago, accepted a flyer from a practitioner while watching the march.

“I finally found it,” she said, “I have been looking for this. I saw people practicing Falun Gong in a park. They looked peaceful and happy.”

“Look, they are so happy and energetic,” she said, pointing at the waist drum team.

“I also know they [Falun Gong practitioners] suffer severe persecution in China. They are imprisoned and tortured. I read in the news that some are subjected to live organ harvesting. The persecution must stop. The CCP should end. It is too cruel.”

She continued, “I heard that many people became healthy after practicing Falun Gong. I think Falun Gong is the most righteous. I’m excited to finally get this information and start learning it. Thank you.”

The CCP’s Impact on the World and Canada Is Detrimental 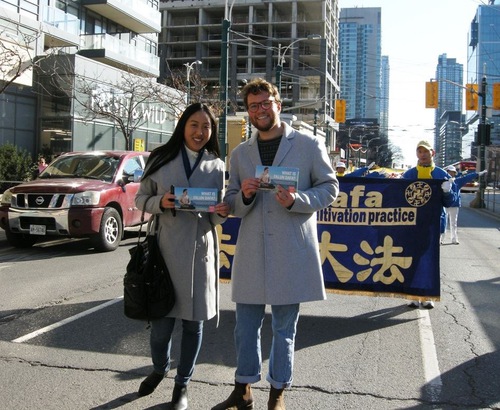 Max Wagman, an accountant, and his girlfriend Lillian Li watched the Falun Gong march. They signed the petition calling for the disintegration of the CCP.

Mr. Wagman said that the CCP’s influence on global politics was negative. The CCP has a poor human rights record. It persecutes minorities and Falun Gong practitioners.

Ms. Li is also an accountant and agreed with Wagman. She said, “I think the march of Falun Gong practitioners is very important. It lets people know the necessity of disintegrating the CCP. Thus, I signed the petition.” 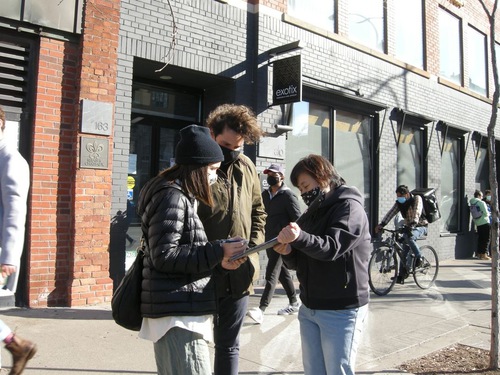 Andy Pace and her husband Mark watch the march.

Andy Pace and her husband Mark watched the march and signed the petition. Ms. Pace said, “This march, with all its banners, will encourage people in the community to learn more about this and work together to stop the evil.”

Mark agreed with her, “This march is good and peaceful. I am a photographer and have shot many photos of protests. But this is the largest peaceful march I’ve seen.” 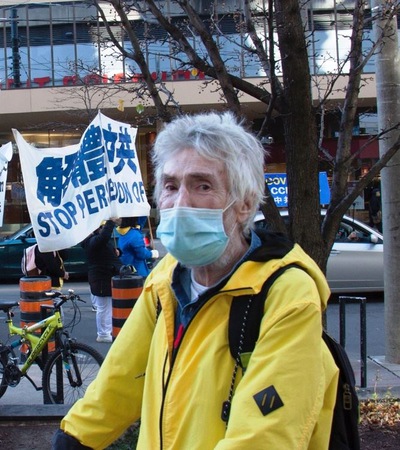 Kevin immigrated from the United Kingdom to Canada decades ago. He was concerned about the CCP's influence. 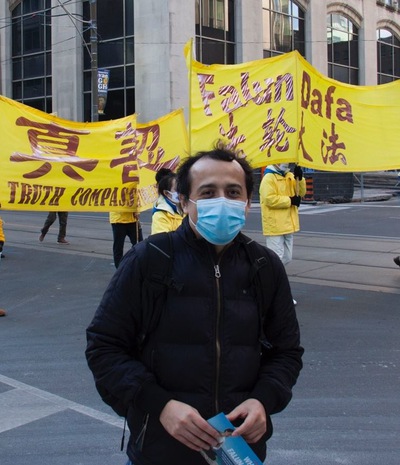 Rodrigo had immigrated to Canada from Mexico. “Thank you. This is a long march. I saw some banners worded ‘End the CCP.’ I support the effort,” he said. 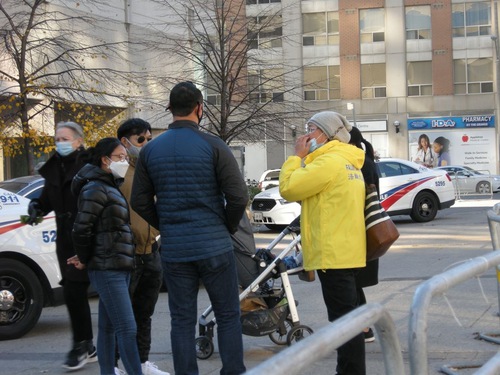 Xiangba, who immigrated to Canada from Tibet, was watching the march with his wife, children, brother, and sister. When he learned about the purpose of the march, he was pleased and decided to renounce his membership in the Chinese Communist Party.

“I joined the CCP, but I found this Party is too evil. I don’t like it. I love traditional Chinese culture,” he said.

“The rapid spread of the coronavirus across the world is due to the CCP’s disinformation and deception. It deceives the Chinese and the whole world. It claims freedom of religion, freedom of speech, and human rights. But there is no such freedom in China. This is the reason I renounce it,” he said.

His wife, brother, and sister all also renounced their memberships in the CCP Youth League and Young Pioneers.

“China Fahui | Master Is by My Side at All Times”