(Minghui.org) Falun Gong practitioners held an activity in the center of the city of Linköping, Sweden, on the afternoon of November 7, 2020. They set up banners that read “Stop the Persecution of Falun Gong,” demonstrated the Falun Gong exercises, and spoke to passersby about Falun Gong and the fact that the Chinese Communist Party (CCP) is persecuting it. They also told people how the CCP had withheld news about the coronavirus and thus caused people all over the world to suffer.

Many locals expressed their support for the event and signed the petition to condemn the CCP’s crimes.

“I keep a close watch on the things that are happening internationally, especially on matters related to what is happening in the U.S. general elections. Every one of us needs to think things through and make our own choices. When you tell me about these matters [about Falun Gong being persecuted in China] today, I am even clearer now. The violent way that the CCP treats kind citizens, the brutal suppression and persecution, are for all to see. Of course I want to support you,” said Mr. Felis, a Linköping resident.

Mr. Felis told a practitioner that his sister is a political figure so she influenced him and he had gotten very interested in politics. He often talks to her about international human rights abuses. “From my sister, I’ve learned about the many problems with regard to the CCP persecuting human rights. So I have heard about the persecution of Falun Gong in China before. Today, I am even clearer about it,” he said.

Mr. Felis had been hurrying by while listening to music when he came upon the Falun Gong event. He said the practitioners seemed to be waiting for him and had something very important to tell him. He removed his earplugs, took a brochure, and started to speak to a practitioner. After hearing what has been happening in China, Mr. Felis seemed especially pleased that he was able to run into them. He asked for a few more Falun Gong brochures and said, “I am going to meet my friends and I will tell them about this. I hope that they will also come and sign in support.” 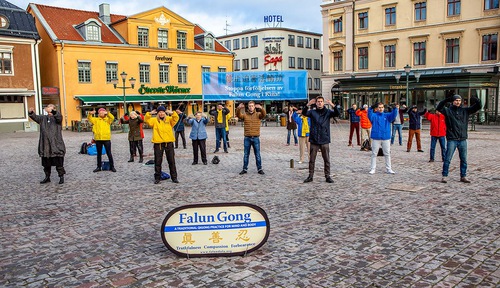 Falun Gong practitioners in the city square in Linkoping, Sweden, on November 7, 2020. 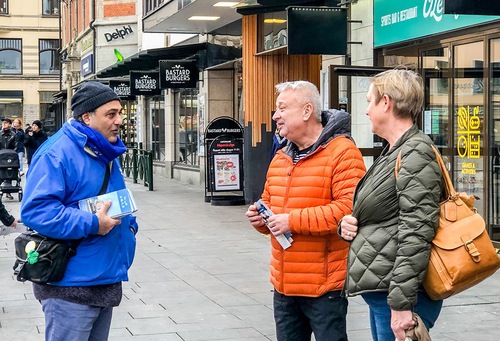 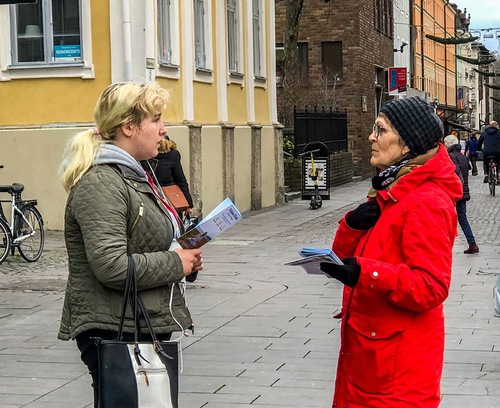 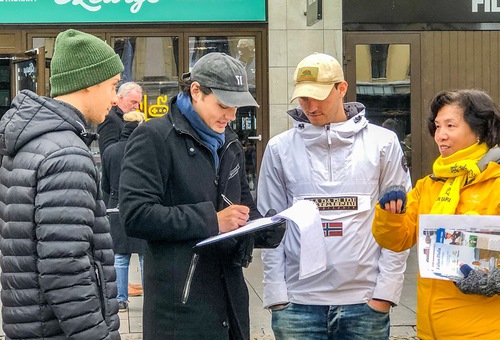 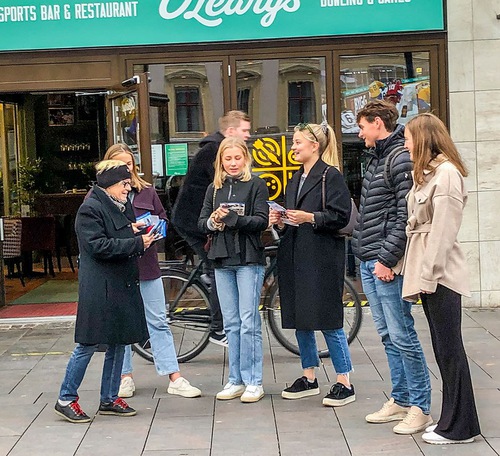 Falun Gong practitioners attract the attention and support of local residents at Linköping city center. Many people signed a petition to protest the persecution.

Fewer people than normal were on the streets due to the pandemic, but practitioners doing the exercises to the tranquil music made many people stop and watch.

Ms. Elin Hjort, who stays near the city center, stood in front of a board with information about the forced organ harvesting from Falun Gong practitioners in China. She and her daughter read carefully for a long time. Ms. Hjort pointed to the board and said to the practitioner, “I cannot imagine how they [the CCP] can commit such an inhumane act. This is horrible!” The practitioner spoke about Falun Gong and explained the lies that the CCP fabricated about the practice and how it is persecuted by the CCP in China. Ms. Hjort’s daughter, a middle school student, listened wide-eyed. She pointed to the petition and said to her mother, “We must sign that. I want to sign it.” Ms. Hjort agreed. After they gave their signatures, both of them seemed very happy, as if they had completed a very important task.

Mr. Calsa Lehto, who lives locally, was passing by the event with three of his friends. After hearing a practitioner say that signing the petition could save lives and help stop the persecution, Mr. Calsa signed. His friends, who live in a small city near Linköping, were also very willing to add their signatures to support the practitioners’ efforts to end the persecution. “This kind of savage criminal act is still happening. Everyone must come together to keep it from continuing,” Mr. Calsa said. The four young men wished the practitioners success.

Ms. Kahlil Palmer, who recently moved back to Linköping from the U.S., spoke with practitioners for a long time. She was there with her son. Ms. Kahlil and her family lived in the U.S. for many years and she already knew about Falun Gong. She said she agrees with Falun Gong’s tenets of Truthfulness-Compassion-Forbearance.

Both she and her son were very willing to sign the petition. The boy was about 12 or 13 but his command of Swedish was not very good, so Ms. Kahlil told him in English that this [Falun Gong] is a very good exercise and that the people who practice it are all kind and good, but that many people in China are being sent to prison and tortured because they won’t give it up. She told him that their organs are even being harvested while they are still alive and let him know that the CCP regime rejects any form of belief and is not a democracy. “We must never tolerate the trampling of basic human rights by the CCP,” she said.

Linköping, Sweden's fifth-largest city, is located in the southern part of the country. Linköping University is one of Sweden’s most well-known universities and one of the top universities in Europe.

“Life Is Easy Since I Began Practicing Falun Dafa”