Life Is Easy Since I Began Practicing Falun Dafa

(Minghui.org) Fan Tangyu, 27, is an intelligent and good-looking young man. While studying for his master’s degree in environmental engineering at Taipei University of Technology, he attended Trier University of Applied Sciences in Germany in 2018. He returned to Taiwan in 2019 to complete his graduate studies.

As a child he was interested in qigong and metaphysics but found no satisfactory answers to his many questions. While traveling in Europe he encountered Falun Dafa (also known as Falun Gong) truth-clarification sites in London, Munich, Berlin, Frankfurt, and other cities. He read Zhuan Falun, the main book of Falun Dafa, on the Internet and realized it answered all his questions.

He was overjoyed: “This is what I have been seeking all my life!” In July 2019, after attending a nine-day lecture and exercise instruction seminar in Taiwan, he began to practice Falun Dafa. 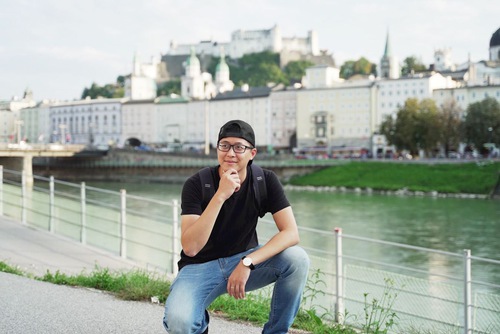 “I've always been curious about the origin of mankind. I studied the history of the earth and various religions for years but I couldn’t find an answer until I read Zhuan Falun. Master Li made everything so clear in the very first lecture,” said Fan Tangyu. “This is exactly what I was looking for! Why did it take me so long to find it?”

Fan Tangyu heard of Falun Dafa when he was in middle school, but he did not pay much attention to it. Instead he practiced another spiritual discipline only to find it was promoting principles such as filial piety and did not actually focus on cultivation.

With his background in science and engineering, Fan Tangyu said he questioned Darwin's Theory of Evolution. “I did not agree at all with those hypotheses. But, I very much agree with what’s taught in Zhuan Falun, because many things do exist even though we can’t see them.”

“I thank Master Li for adjusting my body,” he said. After practicing Falun Dafa for a year, Fan Tangyu said he clearly felt his health improve. He was always prone to allergies, and any changes in the weather would trigger a runny nose and sinusitis. In addition to frequent mouth ulcers and inflammation in the corners of his mouth, he had rheumatoid and autoimmune hip arthritis. Doctors prescribed drugs to suppress his immune functions, but they did not work.

One morning after he finished the nine-day Falun Dafa seminar, Fan Tangwu woke up with an intense headache. He skipped breakfast and lunch and couldn’t think or sleep. He had nausea and diarrhea. Because he had read Zhuan Falun, he knew his body was being cleansed.

After a few hours, suddenly all the symptoms went away. From then on, the allergies and mouth sores disappeared, and so did the body aches after playing basketball. His body was light and without illness. Fan Tangyu was grateful to Master Li.

Seeing through Loss and Gain

“What most impressed me was the principle of 'loss and gain' Master taught in Lecture Four of Zhuan Falun. I am constantly inspired by it and understand that truly living a life without stress is a result of letting go of attachments.

“I was bullied in middle school,” Fan Tangyu said, “but I didn’t hit back. I was upset and asked myself why I didn’t punch the culprit. Looking back now, I think it was probably because of the tolerance I exhibited back then that allowed me the opportunity to obtain the Fa today. It was all arranged.”

Fan Tangyu said he seldom got upset and was usually optimistic, but he cared about others’ opinions and felt he needed recognition. He thought he needed to be knowledgeable or have a sharp tongue. He read a lot of psychological and spiritual books, but his jealousy, resentment, and competitiveness often surfaced. Getting along with others was never easy for him.

After he began to practice Falun Dafa, Fan Tangyu realized those were attachments he should let go of. He said his inner self changed. “The real change was that I was no longer attached to what others said about me. I no longer cared about those petty personal interests. When I let go of the attachment to selfishness, I found my interpersonal relationships kept getting better and better, and I was no longer affected so easily.”

Basketball is a team sport, but sometimes Fan Tangyu got emotional during conflicts and tensions with other players.

As a freshman, he was yelled at when he did not play well. As a sophomore, he had to coach the younger players. Trying to make himself look good and uphold his senior status, he gave orders. He managed and controlled others only to meet with resistance. In the end, no one was happy.

Fan Tangyu did not want to look bad but his tense relationship with the team made him behave badly. After he started to study the Fa every day, he gradually took loss and gain lightly.

Now, no matter how aggressive the other players get, his emotions no longer fluctuate. Instead, he lets it go with a smile. When he sees the people with whom he had conflicts before, he has no resentment.

Before he started to cultivate, he was nervous on important occasions—afraid he'd look like a fool. Using Falun Dafa's principles of Truthfulness, Compassion, and Forbearance, as his guide, Tangyu is now very calm. During a job interview, the interviewer asked him how he managed to perform so well under stress.

He also noticed another change. In the past, in order to quickly fit into a new environment, he would chat his way in. He no longer does this. He just does what he's supposed to do and sees no need to intentionally present himself. He feels more relaxed.

Fan Tangyu said he's still outgoing and optimistic. “In the past I was focused on self-interest and presenting myself in the best light. I'm still optimistic, but my emotions don't fluctuate when my self-interests are affected.”

Responsible and Selfless at Work

The beauty of Falun Dafa has inspired hundreds of millions of practitioners to improve their character. This benefits society. Fan Tangyu, who just graduated and entered the workforce, strives to be selfless and altruistic.

As an engineering consultant, he often collaborates with government agencies. One typically reports to government officials and deals with citizens, and the work often involves other agencies and legal issues. The role of a consulting firm is very important. If communication is not open and handled well, many problems can surface.

Fan Tangyu understands the importance of commitment and always explains the work very clearly. He said, “You might say, 'I've explained it and they should understand it.' Not necessarily. You must make sure the person has truly understood, and you need to clarify anything he or she might have missed. You have to be truly responsible to the person and your position.”

He feels that if one treats the consulting business as routine or only looks out for oneself, then the government and the people won't be taken care of.

“Dafa has helped me understand this. We often say, ‘Don’t let an opportunity slip by, it may never come again,’” Fan Tangyu said.

In today’s society where morality is rapidly declining, it's not easy for young people to guard themselves against the violence and pornography on the Internet. But Falun Dafa practitioners resist temptation and handle emotion in an upright manner.

When Fan Tangyu first started practicing and learned to look inward, he realized that he had been seriously influenced by the pornographic information in the media and unknowingly indulged in it. He had difficulty extricating himself.

After he began practicing he said, “I'm determined to straighten out my relationship with women, re-evaluate it, and quit my habit of browsing pornographic websites.”

He soon had a great xinxing test—his girlfriend began to complain about his practice and often made a fuss for no reason. He understood he must show her a practitioner's compassion.

Fan Tangyu said we're surrounded by deviated notions, and when one’s guard is down, one’s mind and body can be affected. He said studying the Fa and doing the exercises can eliminate this interference. He reads at least one lecture in Zhuan Falun every day—this helps him identify those deviated notions and he can eliminate them before they take root.

After Fan Tangyu began practicing, his family’s opinion of Falun Dafa changed. He was raised by his grandmother. In middle school, he was very resentful and rebelled against her authority. When he got angry, he punched two holes in a wooden door. Now when Fan Tangyu looks at the holes in the door, he asks himself why he would behave like that.

His grandmother now suffers from Alzheimer's and cannot take care of herself. Fan Tangyu looks after her patiently and occasionally reads Falun Dafa books to her.

His mother and sister each have different spiritual beliefs. When Fan Tangyu began practicing Falun Dafa, they tried to stop him. They were deceived by false media reports and said some negative things about Dafa, especially after seeing practitioners tell people about the persecution.

Fan Tangyu discovered that his family members disliked negativity. After clarifying the facts and playing a video about the forced organ harvesting from Falun Dafa practitioners, their attitude gradually changed. They understood that practitioners were telling people that the CCP is persecuting freedom of belief. His family now understands how bad the CCP is.

He also told his family some of his understandings about Dafa, such as what xinxing is and why he wants to practice it. Now they no longer complain when he practices. They know Falun Dafa is very good.

Besides his family, Fan Tangyu also told his managers and coworkers about Falun Dafa. Grateful for the physical and mental benefits he's derived from the practice, Fan Tangyu wants to help end the CCP’s two decades of persecution. He joined the Internet Truth-clarification Project in April.

He said his greatest reward was learning how to cultivate his xinxing when he's frustrated.

Fan Tangyu said practitioners handle things differently from ordinary people in that ordinary people typically look for ways to solve a problem whereas practitioners start by looking inward. They examine their own conduct, verify if their starting point is on the Fa, see if they have any xinxing issues that caused the problem, and remove it.

Fan Tangyu has had several cultivation opportunities. This helped him remove a lot of attachments, just like the Fa principle of “No loss, no gain” taught in Zhuan Falun.

More than 300 million people have withdrawn from the CCP and its affiliated organizations. Fan Tangyu is determined to keep reaching out to people in China, seize the time to help more people break away from communist control, and enjoy a bright future.

“Our Thoughts and Actions Need to Follow the Fa”