New Zealand: Politicians Call for End to the “Parasite” CCP at Auckland Rally

(Minghui.org) Falun Dafa (also known as Falun Gong) practitioners in Auckland, New Zealand held a rally and car parade in North Shore on November 1, 2020, to expose the Chinese Communist Party’s (CCP) persecution of their faith. Close to 14,000 people attended the North Shore Marathon that warm spring day, and many people watched the practitioners' rally and parade and condemned the CCP’s atrocities. 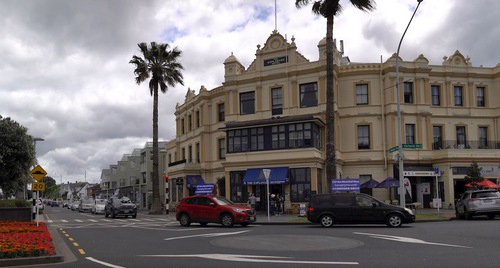 Car parade passes through the main streets of North Shore in Auckland. 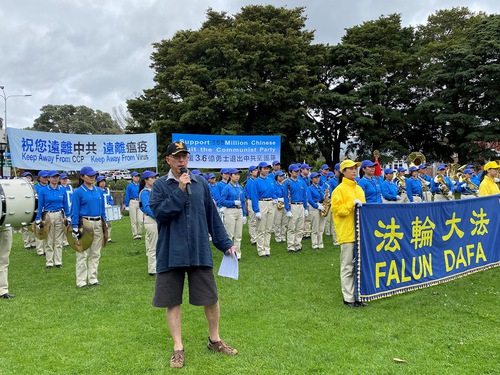 Mr. Chris Newman, Secretary-General of the New Zealand Direct Democratic Party and key member of Advance NZ/Public Party, thanked practitioners for stepping forward. He reminded people of communism's threat and how it infiltrated New Zealand through politics, businesses, education, cultural exchange, and other channels. He said respect and love for the people are prerequisites for a government’s legitimacy, something the CCP hasn’t done.

Newman said most people thought communism was dead, but unfortunately, the dictatorship in China absorbed the Chinese people’s lives like parasites. He said many Falun Dafa practitioners, Christians, and political dissidents have become victims of the CCP’s organ harvesting for profit.

“I see hope today,” Newman added. “I see Falun Gong practitioners’ sincerity and compassion... All of you are winners. You give the world hope.” He encouraged more people in New Zealand to step up and say no to the CCP. “New Zealand must advocate and protect our freedom of belief, political freedom, and personal freedom.” 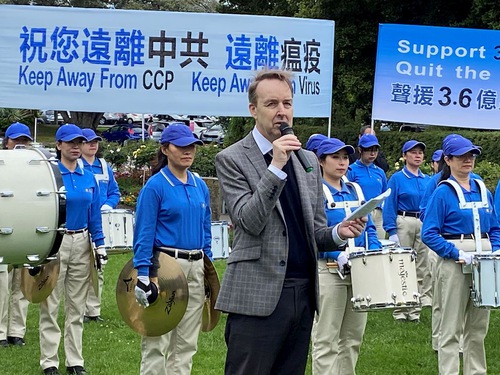 Renowned human rights lawyer Kerry Gore said during his speech, “Today, we celebrate 366 million withdrawals from the Chinese Communist Party and its affiliated organizations, the Young Pioneers and the Youth League. I congratulate the Quit Chinese Communist Party Service Center for enabling this to happen. The Chinese Communist Party’s violation of fundamental human rights and freedoms has led many to reject the CCP. Persecution of Falun Gong practitioners, House Church Christians, Tibetan Buddhists, Uighur Muslims, pro-democracy advocates, Chinese human rights lawyers, and even ordinary petitioners has led many to conclude that the CCP cannot be trusted. As long as the CCP remains in power, there can be no hope for respect for basic human rights and freedoms, civil liberties, the rule of law, or democratic reform.

“The CCP’s repression of pro-democracy advocates in Hong Kong and the imposition of the National Security Law there is intended to suffocateany hope or aspiration for democratic reform in Hong Kong. One country,two systems has become one country, one system.

“The CCP’s practice of live involuntary organ harvesting of Falun Gong practitioners, Uighur Muslims, and other prisoners of conscience demonstrates its wickedness and moral depravity.

“A China without the CCP is what’s best for the Chinese people, and for the world. The 366 million people who have withdrawn from the CCP and its affiliated organizations have made the right decision, indeed, a wise decision. As communism collapsed in Europe some forty years ago due to a popular uprising and rejection of communism as a failed ideology, so too the tide of withdrawals from the CCP will continue.” 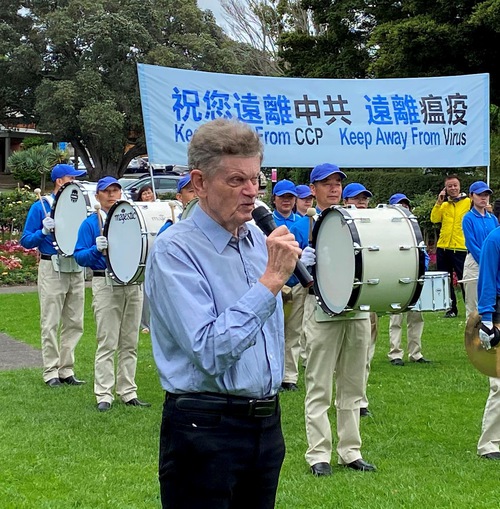 Mr. Barry Wilson, President of the Auckland Council for Civil Liberties, speaks at the rally.

Mr. Barry Wilson, President of the Auckland Council for Civil Liberties, said that the CCP not only persecuted Falun Gong but also the entire Chinese society in various ways. He thanked Falun Gong practitioners for alerting the people in New Zealand.

“With its promotion of a healthy life and the principles of Truthfulness-Compassion-Forbearance, Falun Gong has been regarded by the CCP as a challenge to its philosophy of terror. Falun Gong practitioners face imprisonment, torture, forced organ seizures and re-education.” He was confident that the CCP would be held accountable for its persecution of Falun Gong, Tibetans, Uighurs and house churches as the world slowly realizes the harm of the evil regime.

Wilson called for the people of New Zealand to reconsider trade agreements with China. He said he hoped Falun Gong practitioners’ spirit of freedom would live on in New Zealand and their messages would spread further. He gave practitioners his salute. 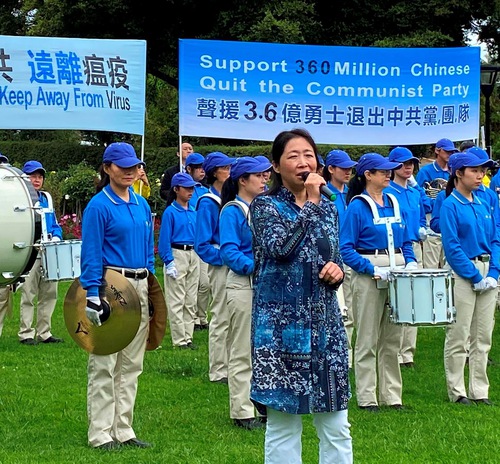 Ms. Daisy Lee, investigative journalist for the Epoch Times, speaks at the rally.

Ms. Daisy Lee, investigative journalist for the Epoch Times, used real-life examples from her investigation cases to remind people about the terror and harm the CCP brings to democratic countries. She recounted how the CCP infiltrated the largest media in New Zealand and controlled the Chinese community's opinion.

Lee called for support to end the CCP and safeguard the sovereignty of New Zealand for the safety of later generations.

Mr. Wood, owner of an international business, and his wife listened to the speeches during the rally. He said he admired the speakers' bravery. “I’m concerned about how much we know. I know very little from our news media. The CCP is cunning. It has a whole system of infiltration...What you are doing is great! I see the attitude of the Chinese people. More and more people are awakening.” He said it would be wise to stop collaborative projects with China because the CCP cannot be trusted.

“Two Yunnan Women, Including One in Her 80s, Arrested for Their Faith”

“Expanding My Wisdom Through Adversity: Marking the 20th Anniversary of the French Minghui Website”